An Easter Miracle for a Chicken 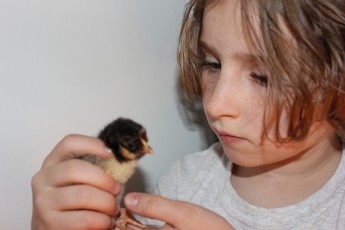 Friday I went out to see the new baby goats and ended up with a box of cheeping baby chicks in my car. Then it just got stranger from there, and yes, I am a little crazy. But in a good way.

June’s first grade class had eggs in an incubator that they had been watching and learning about over the past few weeks. This week they started to hatch, but apparently there was no plan what to do with the chicks. June told Nina, who called the school and offered to take them, so when we arrived there were a dozen new balls of fluff in a plastic storage bin.

June was clutching a tiny chick in her hand. He had hatched the day before, and her teacher had to help him get out of the egg. He was the smallest of the bunch so the class had named him Pipsqueak. His beak seemed to have some damage and there were bare spots on his back and his little feet turned in, making me wonder if chickens can be born with club feet. He didn’t try to stand but just sat quietly in her hand. Pipsqueak was obviously a train wreck of problems, and June was completely in love with him.

As soon as we walked in she was arguing desperately, afraid that we would not let her keep him. Tears streamed down her face and she wailed about how small and sick he was, telling us “I want to help him, I don’t want him to die! Can’t we take care of him?” I inspected the tiny chick in dismay. It’s what every parent dreads; the difficult circle of life lesson. June had her heart set on saving this runt who would almost certainly die. I looked at him sitting quietly in her hand, her trembling mouth and tear-streaked face, and I was so proud of her big heart. I decided I wasn’t ready to let it be broken just yet.

Before I was a nurse I was a veterinary technician, working in clinics since I was 13 years old, so I understand the urge to save a lowly animal. I grew up in the country and nursed baby animals and injured birds. I knew if Pipsqueak was going to have any chance he had better come home with us.

Jason grew up on a farm and is more practical, so he took some persuading. It helped that Nina agreed that if we wanted to “borrow” some chickens we could always bring them back if they got to be too much work for us or the kids got tired of them. They both said the chick would surely die, and part of me agreed but I figured it wouldn’t hurt to try. The agreements made, we picked out 5 more chicks because Pipsqueak would need others to help keep him warm, and into the box they went.

When we got them home we set the box in the basement and put a heat lamp on them. The four larger chicks went right after the food, but Pipsqueak and another small chick we named Peepers just sat and watched. They wouldn’t last the night if they didn’t eat, and I knew the other chicks would start to pick them apart soon. Chickens are opportunistic feeders and cannibalism is not beneath them.

In a flash I knew what to do. I dug around in the back of a drawer and found an old syringe we had left over from giving the kids medicine when they were too little to cooperate with spoons. I mixed some of the baby chick food with some warm water and stirred it into liquid mush. When the kids were in the bathtub I snuck down to the basement to try my idea.

It occurred to me I may the only person in the world who would hand feed baby chicks with a syringe, and I felt a little ridiculous. At first they were confused, but as water and nutrients poured into them they perked up a little. I let June watch me do a second feeding a few hours later so she could see how Pipsqueak was doing. The chicks opened their mouths and ate like little robins in a nest, gulping the watery mush. I dipped their beaks in the water to teach them to drink each time I set them back in the box. I warned her he still might die, don’t get your hopes up, but I don’t think she heard me.

In the morning the two tiny birds were up and moving around. Pipsqueak was walking, and his feet didn’t look crooked anymore. It was amazing how much stronger they were! But I still didn’t see them pecking at the food in the dish, and I didn’t want to hand feed them for their entire lives (even I won’t go that far.) I knew I’d have to let them get hungry and see if they figured it out.

I gave them one more feeding for breakfast then left them on their own for the day. When I checked back that evening they were both drinking, but I didn’t see them eat. Please, please, figure it out I told them. I really didn’t want to have to hand feed Pipsqueak for years, even if I had created the confusion.

We spent Easter morning with family so it was Sunday afternoon before I went down to check on the chicks. I couldn’t tell which one was Pipsqueak. There was no tell-tale bald spot on his back, all six chicks were running and scratching at the litter, pecking at anything that might be food. It was like he had never been weak or sick. I had to go get June, and she knew right away which chick was hers. We held Pipsqueak and Peepers for a few minutes, analyzing the tiny differences in their coloring so I could tell them apart.

This chick that seemed about to die two days ago had completely changed. He was strong and quick and ran with the rest of his little flock. Pipsqueak seemed to know who to thank for this; when I picked him up he cheeped and wiggled, but when June held him he sat contented in her hand. The power of love is amazing, and June’s love had saved him.

So for now we have chickens. I don’t know how long we’ll have Pipsqueak. Our town allows up to four backyard chickens, so we could keep them until we moved. However we are hoping that Pipsqueak turns out to be a hen as we are not fond of roosters. I can’t fix it if he turns out to be a rooster, but we’ll worry about that later.

Whatever happens I’m glad that I helped my little girl follow her heart and listen to her compassion instead of giving up. I hope that she always speaks up when she sees someone in need, even if it is just a chicken. No one else might have gone out of their way to save one baby chick, but when I see them together I know it wasn’t ridiculous. The smile on her face and the love in her heart make it worth it.

It didn’t take much effort to save Pipsqueak, a little creative thinking and a few hand feedings. I’m surprised how easy it was. It’s a reminder that giving it a try even when it looks hopeless can be worth it, and that putting in that little bit of extra exertion can bring huge rewards. I think that’s a lesson we can never learn too well, and I’m grateful to June and Pipsqueak for bringing it to me.