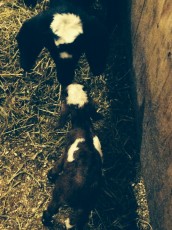 “Bella had her babies today!”

What did your kids learn today? When my 7-year old got to daycare she got to watch a baby goat being born. One was already out by the time they realized what was happening, but the second twin was witnessed coming into the world by June and her friend Zach (Nina’s son and owner of the goat.)

I love Nina. She’s kept my kids since I was pregnant with Rory; we have same approach to raising kids so if there’s anyone I’d want to help us with parenting it’s her. That’s what daycare is you know, it’s another role model helping you raise up your kids and shaping their lives. Last year she built a house outside of town and the kids spend their afternoons out in the fields, getting dirty, chasing free range chickens and helping to feed the horses. Every year she gets baby chicks to add to the flock. This spring two pregnant goats were added to the mix, and later there will be goat milk along with the eggs.

This was not the first time my kids have seen a birth. We timed a visit to Jason’s family farm just right last year and watched a calf being born out in the field. The kids sat mesmerized from the time we noticed the hooves poking out until suddenly a whole calf appeared. I grew up in the country myself; I remember watching my cat have kittens as a child and being amazed. I want my kids to have that kind of experience. To be up close with the wonders of life; one moment there is one creature, and a split second later there are two. In this case three!

June told me all about the new arrivals. The first baby goat was black, the second one brown, so for now their names are Blackie and Brownie. The first one was able to stand even before the second one was finished being born. It was Bella’s first time having kids, and she didn’t lick them clean for very long so Nina showed June and Zach to rub them dry with towels.

They little goats were born in a “pocket” according to June. After the second birth the kids watched the afterbirth come out, but they lost interest once they realized that there would not be a third baby.

June had lots of questions, and thankfully they haven’t been too hard to answer. “So is today their birthday? When a baby is born that’s their birthday, right?” I told her yes that was right. “And if the new babies are girls then someday they’ll have babies?” I love easy questions.

My kids know how babies get out of their momma’s belly, but we haven’t really talked about how they get in there. Of course my 17-year old knows, and she was present at the birth of both of her siblings, jumping up and down as she watched them emerge. I don’t believe in stork stories, I give my kids facts and science, but I think sex is my least favorite thing to explain. It’s just so weird. Birth is much easier, so we’ll stick with that for now.

Travel is only part of what makes the world amazing. Even after 20 years in Iowa there are little daily miracles that show us how precious life is. There are also constant reminders: don’t forget to stop and look and wonder, even if it means hard questions and messy afternoons.