The Seedy Underbelly of Cozumel 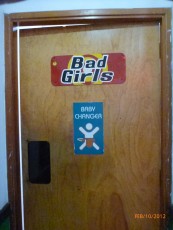 We’ve sold the house, we’re committed to moving to Mexico, there’s no turning back now. So imagine my dismay when I noticed a local brothel mentioned on a Cozumel forum…they have those on my sweet, innocent island?

I asked Jason about it and he had heard of at least 3 from talking with other men on our visits. Ack! How many more could there be that we don’t know about? I’m bringing my kids to an island full of secret brothels? What if we wind up living next to one by accident because I obviously don’t know what they look like? Disaster!

I admit I have found it funny that any time my husband is in a foreign country and alone after dark (or sometimes during the day) offers of all sorts of illicit substances and by the hour companionship materialize out of nowhere. I have never seen these people myself, but let him run to the car to fetch something and he’ll report back with an offer for 4 different drugs and dodging an overly handsy woman.

I asked him why he thinks this happens, and he shrugged and said they assume that’s what single white men alone in a developing country are looking for. That wasn’t so funny.

Being a rational person my panic attack quickly subsided and reason kicked back in. We currently live on the edge of Des Moines, which I have often referred to as a really large small town. It’s pretty tame as far as cities go and I consider myself safe in almost any neighborhood after dark, but there are always a few exceptions. I bet a lot of people think there aren’t any brothels here in our wholesome Midwestern towns, but I know there are and I don’t mean just because the odds are in favor of it. I’ve heard stories of adventures in prostitution from when my husband was a wild-man heavy-drinking drummer in a heavy metal band, (and yes, I was thankful they were not about any experience of his own.) We also have a relative who has worked on the narcotic squad for years and shares interesting information now and then about the levels of gang activity-who knew the Asian Mafia had a huge presence in Des Moines? I didn’t.

The point is there are illicit activities going on in every town everywhere, including the tiny Iowa suburb I live in. When we are at home it’s familiar territory and we aren’t looking for a threat so we don’t see one, but when we travel every stranger can seem to have sinister intentions for some people. Why is this?

Simple fear of the unknown.

Try an experiment: Watch the nightly news and pretend you don’t live there. First impression?

Try an experiment: Watch the nightly news and pretend you don’t live there and don’t know anything about the place. What’s your first impression? Thanks to sensationalized news coverage of all the shootings, robberies, scandals and car accidents, it looks dangerous to step outside, much less live here. You know the reality of where you live is different, and most places are.

We constantly have people telling us that Mexico is dangerous, that we shouldn’t take our kids there but I don’t believe this for a second. It’s not any safer here in the U.S., you can still get robbed or murdered or find one of your neighbors is doing something they shouldn’t (hello meth lab!) There are homeless people on the streets, you might have just learned to look past them at home. Bad things happen everywhere but the majority of people are good and kind and will help you if they can, and that’s what we focus on. Just look at my experience in Rio de Janeiro, a city with the reputation of being one of the most dangerous.

So even though I am now aware of the brothels on Cozumel I am not going to fear them or worry about them, and I’m not going to change my mind about living there. We’ll choose where we live carefully, but chances are that unless I actively look for them I still won’t see them, and I’m ok with that. There are plenty of other things to see and life is too short to live in fear.

This post is part of a #WeekendWanderlust link up with a lot of other great posts 🙂 Bloggers unite!