April: The Month of Illness and Injury 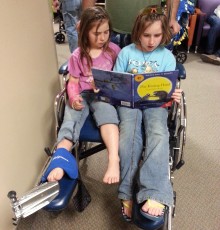 April has been a rough month for us and I can’t wait for it to be over. It seems like we’ve been in some sort of medical office every couple of days, that I’ve been nursing someone or feeling ill myself almost every day.

It started on April 1 when Jason called me upstairs to where he was working on installing carpet. When I said “Just a minute” and he calmly said, “No, come now,” I knew blood was likely. He was sitting in the bathtub with blood covering his right leg from the knee down and a washcloth held over his kneecap. While “kicking” the carpet to stretch it by driving his knee into a pad he had driven the knee directly into the metal edge of another tool, opening a two-inch gash down to the bone. I poured some clean water on it, declared I could not fix that and we’d have to go for stitches.

Before we left I scolded him for bleeding on the new carpet and took a minute to scrub the red spots out while they were fresh.

At the urgent care clinic they got us right in but didn’t have anywhere to put us, so the initial exam took place in the lab. I took pictures for the kids, thinking June would be disappointed that she missed it while Rory would be relieved. Six stitches later we were back home, but Jason wouldn’t be able to work on much for at least a few days. Having taken the week off the work on the house so we could get it listed, his limitations were more troublesome than any pain to him. Sometimes a nurses’ hardest job is convincing the patient to be still and wait to heal.

Rory had broken her arm in March, the first broken bone in our family. At first she thought it was fun to get attention and have people sign it, but when the newness wore off she was counting down to the day she could get it off, April 10th.

Five days before the appointment she was landed wrong jumping on the trampoline and her ankle started to swell. Oh no, I thought, not another broken bone. It was Easter, so there wasn’t any choice but to go the emergency room even though we knew it would be a much greater charge than if we’d gone to urgent care, $200 just to walk in the door instead of the $10 copay at the clinic.

I hoped it wouldn’t be busy so things would go fast, but the children’s ER was packed, standing room only. When it was our turn I was relieved to see an awesome nurse I went to school with, and was happy that she took our case herself even though she was the charge nurse.

I blew up gloves and drew faces on them to make chickens for the girls when they got tired of waiting for x-ray results, and after 5 hours it was declared a nasty sprain but not broken. I thought this would be better because it wouldn’t mean another cast, but sprains can be more painful than breaks. After being at the ER until midnight both girls stayed home from school the next day, but Rory wouldn’t walk at all. I called and asked about crutches, but when we went to the clinic to pick them up the smallest size was still too tall for her. They gave her an inflatable brace that helped quite a bit, and the next day she was able to go back to school, her entire right side padded and protected by cast and splint, a pathetic sight. Despite swelling and soreness it’s been hard to convince her to slow down, even now.

That week all four of us went to the eye doctor so that it would be done before we leave for Mexico. Neither of the girls had ever been and June was hoping for a cute pair of glasses, so she was a little disappointed that her vision was fine. Jason ordered new glasses and I replenished my contact supply, all the while answering questions about our plans to move.

Jason also refused to slow down (Rory gets it from him I think) and popped out 5 of his 6 stitches after only a week. I told him there was no use re-stitching it, right across the bend of the knee was just a tough place to close a wound, but he did go see our regular doctor and get steri-strips glued on the hold it a few more days. I decided that next time someone was injured I would just sew them up myself and save time so we wouldn’t be interrupted by any more trips to the clinic and started looking online for suture kits.

At some point June hurt her ankle as well, but we don’t know when because when she complained and wanted it wrapped and iced like Rory’s we assumed that she was just tired of her little sister getting all the attention. I started to wonder when she limped through a soccer game, plainly uncomfortable despite the ace wrap on her ankle, and when we got home I saw that it was swollen. I felt bad for doubting her. The two of them often sit side by side with matching ice packs on their right ankles and take turns winding the ace wraps around their feet and legs.

It wasn’t all bad. On April 10 Rory got her cast off by pulling it whole over her hand and off her arm, making it a nice keepsake. One injury healed! Her skin was dry and scaly and itchy, and I was surprised it took weeks to heal it. The month of decreased activity had taken a toll on her strength even though she had seemed to be going full speed, and she gets tired faster. Her broken arm will take up to a year to fully heal, and it’s not as strong as it was, but she’ll get there.

The third week of April it was my turn, and I tend more toward illness than injury. I got run down, had no appetite, and within a few days everything I had eaten had to be gone due to the speed things were passing through my body. I got dehydrated, then nauseous, then started throwing up. That seemed to be what I needed, and my digestive system returned to normal, whatever had offended it seemingly gone. Not so bad in comparison, right?

Less than a week later my throat started feeling sore, and I woke up with lungs two sizes too small and a cough that made my head seize with pain. Just a cold doesn’t begin to describe how miserable it is to not be able to draw a deep breath or blow your nose without having a coughing fit that makes your head want to pop from the pressure.

June started having headaches, pressure across her forehead so I suspected a sinus headache that meant she was coming down with whatever I had but there wasn’t much I could do. She was so excited for her spring concert, but watching her on stage I noticed she stopped singing at times and just stood staring out blankly while the children around her waved their hands doing choreography. Afterward I asked if she had fun and she burst into tears, saying her head had hurt so badly under the bright lights that it wasn’t fun at all. I hated that the experience had been ruined for her.

Allergy meds, decongestants and ibuprofen not helping, we paid a visit to the chiropractor. He adjusted each of us carefully, used a tool to tap on our faces, and the rest of the day my sinuses drained like a faucet. But I started to get better.

I took Rory to the dentist at her insistence. She had a loose tooth all month that wasn’t getting any looser, and the adult teeth were visible coming in far behind the baby row. She wanted it pulled, and trustingly let them numb it, keeping her eyes closed so she never saw the needle. A bloody smile of triumph showed everyone that she had gotten the stubborn tooth out, and the tooth fairy finally got to visit. A small victory to end our bumpy month!

So today is the last day of April. We have soccer tonight, another opportunity for injury, and I’m still wheezing and coughing, but I think we’re getting to the end of it. The work on the house is done and it’s sold, school is out in a month, and now we must turn our focus to shedding material goods. We don’t have time to be sick anymore, and honestly I am just fed up with it, so I have decided that our season of illness and injury will end with the month of April. Mind over matter, right?

Cross your fingers (and wash your hands!)