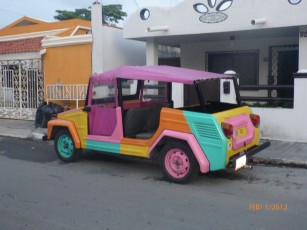 For those of you who aren’t so great with math (like me) 70 days means that in a little over 2 months we will be on a plane to Mexico. The closer it gets the faster time seems to go, and it’s a relief and a panic attack all in one.

This year’s spring cleaning is a whole new experience because we still have to get rid of most of our stuff. I sell it, I take it to Goodwill, I give it away, and the garage is still full. Where did all this stuff come from? Where has it been while we’ve been living here? I can’t wait to get rid of it, but I hate to just throw things out (waste not want not!) so I’m trying to find it all new homes.

The kids go back and forth on how they feel. Some days they’re excited, some days they’re sad to leave their friends. We promised them a going away party that they can invite all their friends to, and school ends in less than a month. We’re planning to worldschool as we travel, so who knows when they’ll be in a school building again.

Rory said we can get rid of all her things except Ham (her beloved stuffed pig) and she’ll be fine. We’re not going to be quite that extreme but I appreciate her easy-going support. June, on the other hand, is like a cuter version of Gollum from The Hobbit. She hides precious things in her bed and hoards them-whether they are hers or not doesn’t matter. She is going to have a hard time letting go, but we’ll get through it.

I don’t want them to feel deprived or like we’re forcing them to give up everything they love. They are part of the process, I’m not going to disappear their things while they’re gone. Some things, their bikes for example, will be sold and they get to keep the money and buy new ones when we get settled. If in doubt things that can’t be taken will be stored safely for at least a while, just in case.

I even find myself holding on to comfortable things. Sitting at June’s soccer game in the rain this week I had to have a talk with myself: Yes, this is a great umbrella, it’s huge and sturdy, but I’m sure they have umbrellas in Mexico that we can buy so I have to let it go. We do not need to try to squeeze it in. I have had this conversation a lot, reason talking down my urge to hold on to things that don’t really matter.

Jason and I are planning like mad, making constant adjustments as we go. Our house sold in just 12 hours, and the inspections and paperwork are progressing nicely. We have a house lined up in Mexico for our first month while we hunt for something long-term. Jason’s employer drew up a contract so he can work from remote and we did a happy dance. We’ve figured out a plan for phones that should work wherever we are (yes I’ll blog about the details after we confirm that it all works.) Things are falling into place.

The last month will be the trickiest. Our house will close mid June, and then we have a month planned in the U.S. with no house. We’ll be staying with relatives, visiting friends and camping out a little while we make the rounds and say goodbye. Originally we had planned to take a family road trip to Florida and Disney but with TBEX in Ft. Lauderdale in October we decided to put it off until then.

The last part of June will be for Iowa family, and July will be for my family and friends in Arkansas and Southern Missouri. I’ve never shown the little girls where I grew up in Missouri so we’ll say a final goodbye to the past before we fly away into our new future.

We still have to get the kids in for shots (I hate making them get shots so yes, I’ve put it off,) vet trips for the pets before they go to new homes, there are records to collect and back up plans to solidify. This is the beginning of the final push toward a new life, and while I’ve been waiting a long time suddenly my To-Do list is looking very long. We’re approaching terminal velocity, no turning back and no slowing down, and if it doesn’t get done….well I have to admit that at this point I don’t really care. As long as I have my family with me, nothing else is really necessary and we’ll be fine.

Posted May 6, 2015 by amelia @ theeverydayjourney.com in category "Mexico", "Minimalism", "Travel