Snorkeling With Our Kids 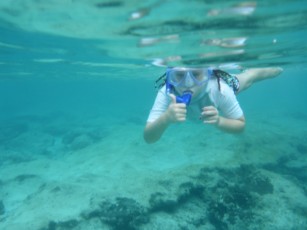 The last time we visited Cozumel June turned six and Rory had just turned four. June was pretty good at snorkeling with a life jacket on, but she was a little scared to go out over her head and Rory had no interest in it at all. Fast forward a few years and things have changed.

I have written before on how much June and Rory love the water and we made sure they were good swimmers long before we brought them to Mexico. If your child is going to get in the water I figure the safest thing to do is make sure they can swim.

We go to the ocean almost every day and we always bring a mask and snorkel. Spending time in the ocean was a big reason why we moved to Cozumel, one of the best snorkel and diving spots in the world thanks to the Mesoamerican Barrier Reef. That might change within our lifetime as sea levels rise and oceans increase in temperature and acidity, and we want to experience it and show it to our children. I hope that the oceans are still enjoyable when my children are grown, but it’s possible that they won’t be. Teaching them to love the ocean also helps motivate them to fight for it and protect it.

Our starter house here in Cozumel is only 3 blocks from the ocean, and we can easily walk to a spot that the locals swim at with a sandy beach and decent aquatic life to look at. I’m not a fan of sandy beaches myself, the sand gets picked up in the water and makes it murky, decreasing visibility for snorkeling, but for Rory sand is always a plus. She loves to make sand castles. When we move to our apartment next week we’ll be further north on the edge of town and still only two blocks from the ocean. I find the beaches are not only cleaner up there, there is less sand and more rock, making the visibility a lot better (but still allowing castles to be built.)

There are safety concerns when taking two children raised in Iowa into the ocean regularly. There are days I watch them bobbing further from shore than I’d like with my heart in my throat, having almost drowned twice myself. I don’t tell them I’m afraid because then they will be too, but we stress safety first. They are good swimmers, and but they have to be reminded to take breaks. When they get tired we force them into life jackets or pull them out.

We bought snorkel vests for all of us but found them uncomfortable (arg! Super wedgie!) and they barely keep the kids afloat. I had planned for them to be a constant safety net as we learned to swim in the ocean, but sadly they just aren’t that useful so we improvise. There are no lifeguards on most of the beaches here. We’re it.

Most days the girls stay in water that’s shallow enough they can put their feet down if they need to, although I encourage them to keep floating to avoid stepping on the homes of the creatures underneath them. We’ve talked about spiny sea urchins and I’m sure sooner or later one of us will step on one, but for now I try to make everything a positive experience as they learn.

8-year-old June started a rock collection at the swim beach closest to our house, stones and asphalt and pieces of shell that she gathered up and piled in a circle on the bottom in about 3 feet of water. After a few days she was thrilled to find fish living in her creation, and we talked about building artificial reefs. She wants to go see the one built from molds of living people in Cancun, the Underwater Museum. She ducks and gasps and works hard to haul rocks from all over the beach and shallows to add to her creation, and every time we go there are more fish and crabs living among her rock collection.

She wants to study sea urchins, the strange spiky creatures that we dread seeing under our feet, so we look them up online. Whatever they want to know, we try to find the answers. This is how passion is found, and how a lifelong desire to add and give back to the ocean starts; I can see her analyzing and planning and working on building her “reef”, and I wonder if she realizes that she can continue to do this her whole life if she chooses.

6-year-old Rory is always chasing after her sister, so she has a rock collection too. Hers is a long line leading out from the shore, easier to find than a pile. Sometimes they fight over the rocks, claiming she stole from my collection, and when I step in to referee I find that June truly does know her rocks, can describe each one and chooses it specifically. Rory is not so picky and can usually be persuaded to hunt elsewhere, but she’s not taking from June’s on purpose, she just grabs what’s close.

June is a great snorkeler and will free dive short depths to bring things up or get a closer look. When she started swim classes the teacher gave her the nickname “Miss Fish.” She relaxes and floats on the surface, content to watch what’s going on below. She regularly spots animals before I do, pointing out skates and eels on the bottom. I don’t watch her as closely in the water- she is the older one after all.

Rory has grown by leaps and bounds since our previous visit. Now that she’s discovered what’s under the surface she is not only interested in snorkeling, she can’t wait to go and starts asking as soon as she gets up.

She’s fearless in the face of waves that strike her little body from shoulder to knee, and swims out in depths well over her head confident in her own ability to get back. In Iowa she was always the best swimmer in her class, a benefit of being the youngest and trying to keep up with her big sister. When she gets tired of her snorkel she just uses the mask, but she doesn’t give up. The most upset I’ve seen her get was when her snorkel come off and sank to the bottom in about 10 feet of water. I had her put her face in and watch while I dove down and got it, and she cheered.

I am so proud of my little mermaids.

Being here is exhausting some days; the ocean is vast and powerful and looks pretty scary when I see their tiny heads bobbing in it, but the excitement and curiosity I see in their eyes tells me we did the right thing coming here.

We are practicing our snorkel skills with a goal in mind: whale sharks. There are lots of tours that will take you out in to the open ocean to swim with the largest fish in the sea from May 15 until September 15 as they migrate through the area. The whale sharks are following their food source, plankton, and they filter feed on the surface, making them easy to snorkel with. Being in open water means the girls have to be able to clear their masks, they have to deal with water getting into their snorkels, they have to be able to cope with difficulty without putting their feet on the bottom because that won’t be an option. The tours are required to make us wear life jackets and I’m glad, but the swimming and snorkeling will be up to us. Whale sharks don’t stop and wait for you.

I have always wanted to live by the sea, and every time I get in the water I am reminded why. Every time it is different, there are new fish, new behaviors, new arrangements of sand and rock on the beach, new patterns in the waves. The ocean makes its’ power known, and I have a healthy respect for it.

Living by the ocean I hope to instill not only respect but love into the hearts of my children, in the hopes that they can make a difference in the ocean that will exist in their future. It’s the best thing that I can do for them-and for the sea.