Do you believe in fate? I went to a birthday party for a friend’s child over the weekend and I think I met the people who are going to buy our house next year.

Our house is right where she wants to be. She already knows two of our neighbors on a street with only a dozen or so houses. Her family lives in our small town, her youngest is starting school down the street, and our house will be priced right for a first time buyer. She has to talk it over with her husband, then we’ll have them over for a BBQ/house tour, but it feels like formalities to me. I just have this crazy feeling that it’s going to work out. 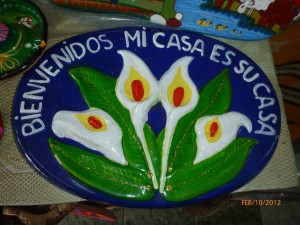 It’s exciting because selling our house is going to be a crucial step in our moving process. The last time we sold a house we had to take a loss; basically we wound up paying a few thousand dollars for someone else to take the house off our hands. That was in 2008 when the housing market crashed.

This time we really need to make some money when we sell to put toward the move to Cozumel, Mexico next spring. We don’t have any savings to speak of, although we’re working on it. We have some debt that we’d like to pay off so we’re not making payments from overseas, and we can’t be sure what kind of income we’ll have until we actually make the move. We’ve paid off a good chunk of the house and the market has improved, but it’s a little scary.

By now you’re probably screaming “So why are you moving to Mexico with no money?” The answer is simple: we’re living here with no money, so what’s the difference? We live paycheck to paycheck with little safety net, as I think a lot of people do. If we moved to another state in the U.S., started paying rent, went to different schools, changed jobs because we moved, would we seem crazy? Then why not move wherever we want to in the world?

I’m not a fan of waiting for “someday” because too often it never comes. While you sit around waiting for the stars to align you get old, you get sick, you die and your dreams remain just dreams. SEIZE THE DAY, PEOPLE!

Life is too short to wait for the kids to grow up and the bank account to hit full (is there such a thing?) There is always a reason to put off your dreams, and we know them all. I wonder what friends and relatives are saying, and I worry that we’ll fall on our faces. La la la la la, I can’t hear you little nagging voice of doubt! I know more than anyone else how crazy it is for us to move to Mexico. But I want to do it anyway, because life is too short not to.

I want to be there with my children, all three of them, not after they’re gone away living their own lives. I want to live there, not vacation, so we’ll work and pay bills and do all the day-to-day things we would have done anyway. I want to sell my house and walk away from everything I own to find a larger world to live in, but I’m also still living the same life I would have here. To me it’s not that different, so the financial insecurities I’ve lived with all my life aren’t enough to hold me back.

So now the question becomes if it’s not so different, why go at all? Why not stay here? Because it is different. Our lives will still have the same basic pattern of work and school but it will play out in another culture. The environment around us will add ambiance and give it a new flavor, the same way food made in a restaurant never tastes the same when you make it at home. It will expand our understanding of the world to see how others live, to speak another language, to find our way in a strange place. Our lives-and our children’s lives-will never be the same.

I had assumed that selling the house would be one of the final steps in our journey to Cozumel, but after finding the perfect buyer this weekend I think it may be settled a lot sooner. It’s a friendly wink from fate that tells me we’re on the right path, that things are going to work out. I know it was just a conversation at a party, but that’s how things start. I have a feeling…..and amazing things happen when you follow your feelings.