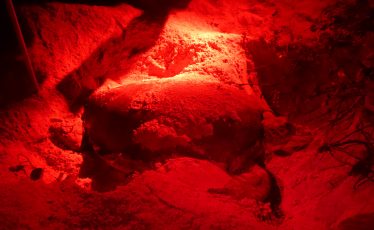 Last night we did something I have wanted to do for years: we witnessed a green sea turtle laying her eggs on the beach.

Let me apologize up front for the poor quality of my photos, but it’s hard to get pictures in the dark. If anyone wants to offer lessons to improve my photography I’m a willing learner, but until then these will have to do and I love them, so I wanted to share them with you.

According to Lemuel, our guide from the Ecology department, Cozumel is the nesting place of two kinds of sea turtles, Green and Loggerhead. Hawksbills are often seen in the water eating the sponges but do not nest here. At one time turtles nested all around the island but development has disrupted their nesting until it is primarily only on the “wild” side, the eastern coast facing into the gulf. Sea turtles nest in the same place they were born, so having a nesting ground change doesn’t always mean they will stop using it but it does make it harder. There wasn’t always a road above the beach and a few determined turtles climb so far up the beach they go across the highway.

To protect the turtles the road along that side of the island is closed at night and guarded by the police and military. This keeps the beaches dark, keeps cars from running over any turtles that get in the road, and prevents people from bothering or even stealing the turtles and their eggs. When we drove up a little before 10:30 there was a barricade where the police stopped us and checked our wristbands before letting us through to park and wait at Mezcalitos. Two other people were already there waiting, one from New York and one from North Carolina.

We wore bug spray and closed toed shoes, but the wind was strong and kept all the bugs away. Salt coated my glasses more than once and I had to periodically wash them off with fresh water from our water bottles. The moon was almost full, giving us plenty of light and reflecting off the large incoming waves, a perfect night to be on the beach.

June and Rory were wound up and ran around while we waited, sure that every shadow on the beach was a turtle. “I saw a turtle stick its head up out of the water!” The idea of a sea turtle popping its head up like a gopher was pretty funny.

When the ecology department’s turtle truck found us close to 11pm (half an hour late, standard for Mexico) Lemuel jumped out and explained that we were going to follow them on the highway while they drove closer to the beach on the bike trail looking for turtles for us to see. The girls were sure there were turtles where we were, and to Lemuel’s credit he ran down and checked for them but there was nothing.

Jason drove alongside the truck while the girls and I watched the volunteers in the back, a little jealous of their cool head lamps as they practiced changing them from white to red lights. Red lights were used to look at the beach because they won’t disturb the turtles and possibly send them back into the ocean without laying their eggs. At one point we stopped and all piled out. Lemuel explained that there were turtles on this beach and pointed out some large dark shapes in the sand, but none of them were in a nest yet so staying here would disturb them.

We saw one headed for the sea and were allowed to go down on the sand for a closer look. Alarmed, the turtle started to hop and made it into the water with amazing speed. Lemuel said she had not completed a nest or she would have been too tired to move that fast. We followed her trail in the sand and found a half-dug hole where she had started a nest but then changed her mind. Sea turtles lay their eggs several times in a season, so she would be back another night.

We drove a little further before finding the right place, a beach with turtles digging nests. While they are approaching and preparing the nest a mother turtle can be startled and driven away so we kept our distance, Lemuel telling us about the turtles while we waited in the dark. The loggerheads lay their eggs closer to the water, while the green turtles climb up higher into the dunes. This helps the ecology workers figure out what kind of turtle nest it is and keep track of the numbers. There have counted over 1600 nests this year so far.

Once a sea turtle starts to lay her eggs she goes into a trance and we can observe her closely without bothering her. She will lay more than 100 eggs and nest 2-8 times, but out of every thousand babies only one will survive to adulthood. They do not reach sexual maturity until around 30 years of age, so it will be a long time before the baby turtles return to the beaches where they were born. 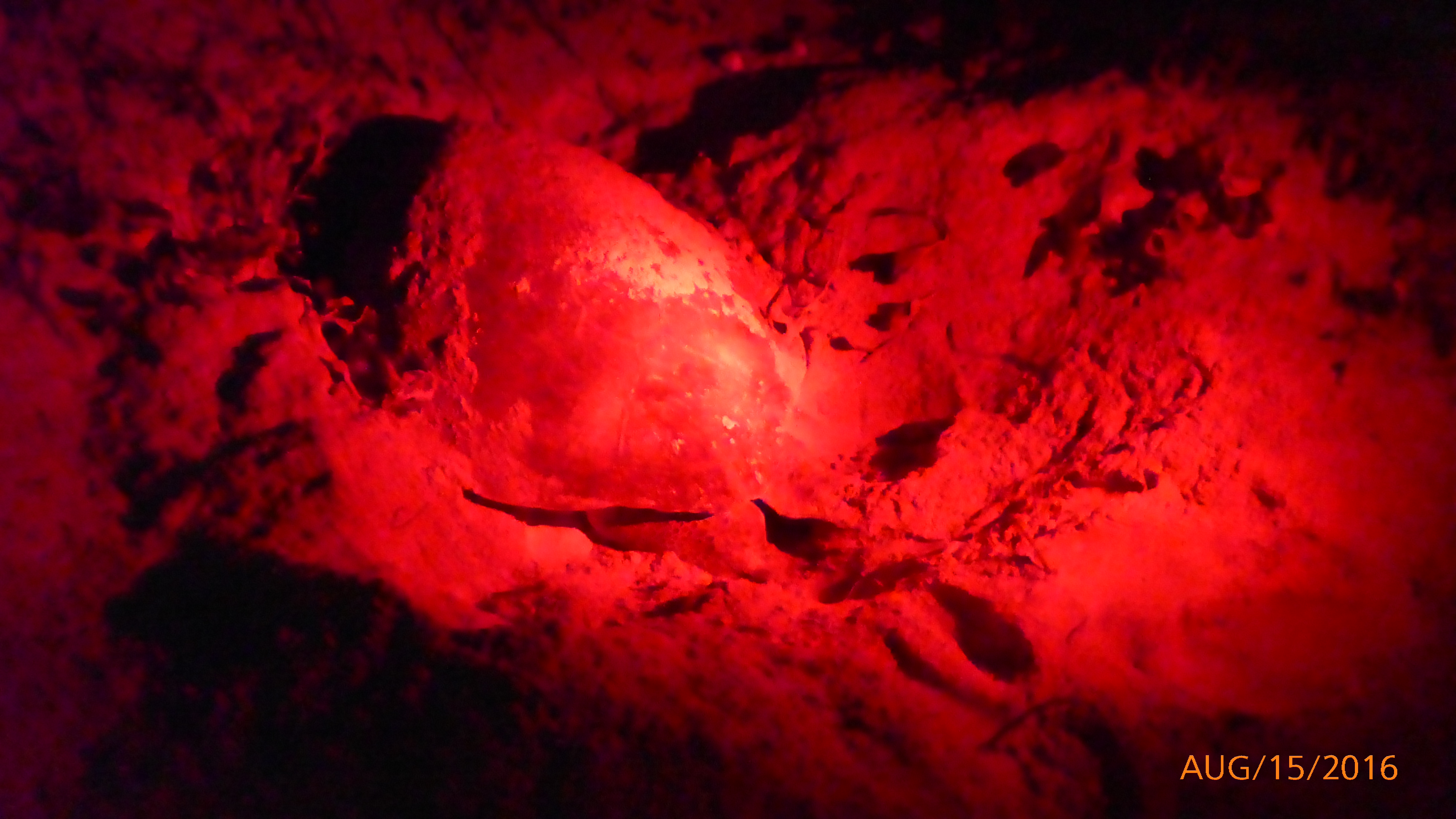 We found a turtle!

The girls bounded up the beach on Lemuel’s heels to see a turtle that we never would have found on our own. You would think a giant turtle would be easy to spot, but it’s dark and the mama turtle hides down in a depression for her large body to lie in while she dropped her eggs into a small cylinder deeper into the sand. Ours was a green sea turtle, maybe 150-180 pounds so just a “small” one. I’ve seen turtles while scuba diving but seeing them on land they are so much larger!

She held her back flippers over the hole as she laid her eggs to protect them, so we couldn’t see them most of the time. Lemuel reached down and tried to move one over a little so we caught a glimpse of the ping pong ball sized balls that were her eggs, but after a few seconds she moved her fin back over the hole. Good mama.

We used red lights most of the time so we wouldn’t bother her too much and stayed behind her. When she was done she carefully filled the egg hole with sand using her back flippers. Rory and June shoved more sand down for her to use, delighted to be helping. Then she started covering the whole nest by digging with her front flippers, flinging sand wide and spraying us. It was hard work for her, and she would dig half a dozen scoops then drop her head and rest. Sand stuck to her face but her big dark eyes were watching us. 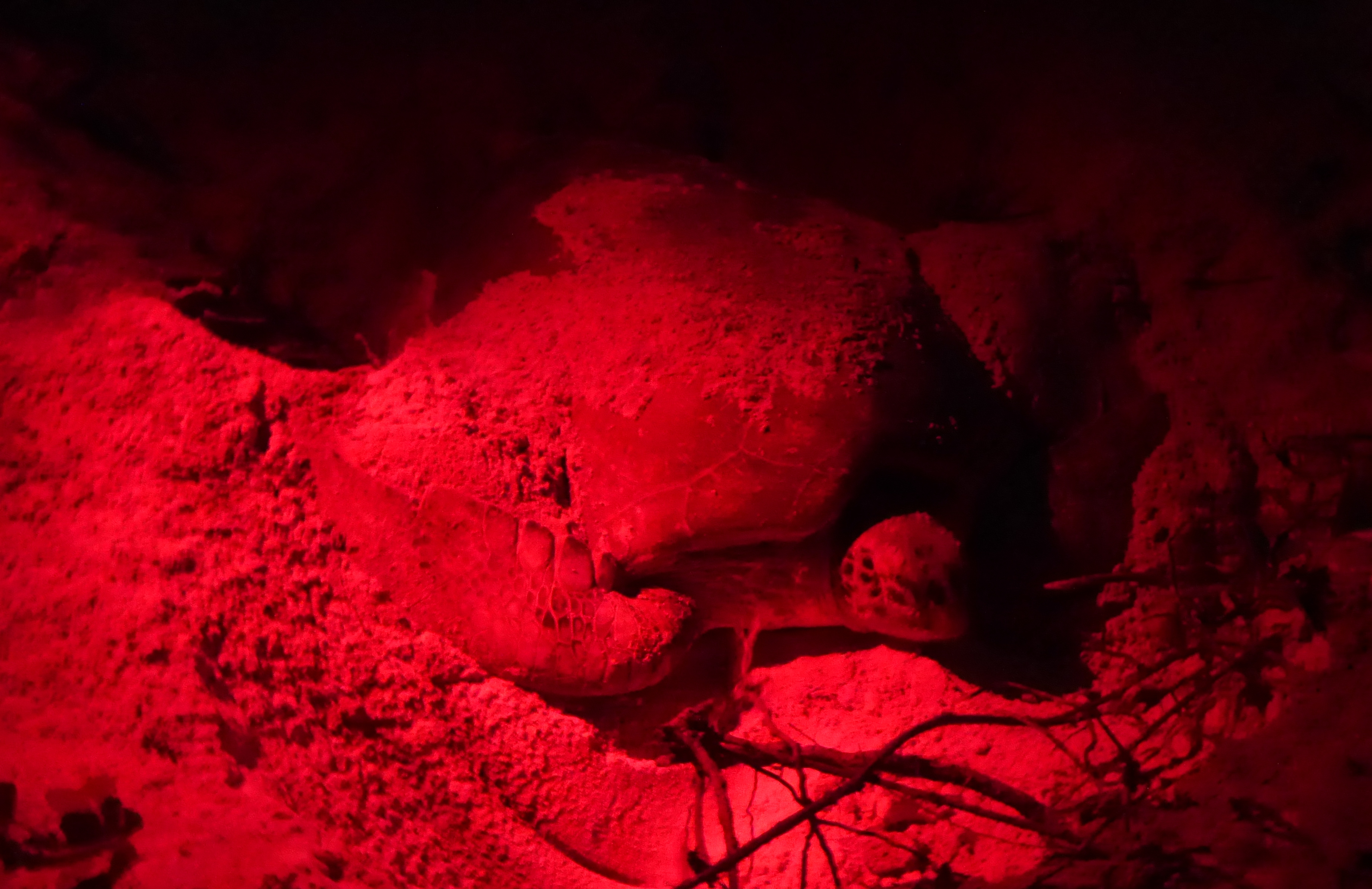 Laying the eggs only took 10 minutes but covering them was a longer process, maybe 45 minutes. She moved forward quite a bit as she dug sand that was in front of her and flung it back to hide her eggs. Rory and June sat on the dune above her sculpting sand turtles in her honor, although they eventually fell into the hole she was making.

Behind us another mother turtle popped up from a higher dune and started hauling herself toward the ocean, done with her nest. We were startled, having been 20 feet from this 200 pound animal and without realizing it was there. We let our girl work in peace for a moment while we followed her neighbor back down to the surf. Sea turtles spend their whole lives in the ocean except to lay their eggs, and I bet it must feel really good for them to get back to the water and float again after hauling their heavy bodies up onto the land.

Back at the nest our turtle changed her movements from digging to climbing, hauling herself out of the hole. She dragged her heavy body toward the water, stopping every few yards to rest unlike the earlier one who had almost run to get away from us. I tried a photo with a flash but it was harsh and it seemed offensive to scare her. We followed her down the water saying goodbye and thank you.

What else can we do to help sea turtles?

Later we will come back and help with search and rescue again like we did last year to help get as many babies as possible into the ocean. I asked about similar programs in Playa del Carmen but was told there are not many nesting areas there anymore due to the dramatic development along the beaches driving away the turtles. We planned to come back to Cozumel regularly anyway after we move to Playa, but I realized I may not have valued the ecology department here as much as I should have. They have many programs for children and visitors teaching about the island and how to conserve the natural resources here.

One of the others on our trip said he was working with Residencias Reef to help make their beach more friendly for nesting turtles and it’s working, with two loggerhead nests there already this year. The big thing beach front properties can do: turn off the exterior lights at night. Human can change natural cycles, but with education we can also help to diminish our impact instead of destroying the places we inhabit, living in harmony with the creatures like sea turtles who share these places with us.

The tour we were doing is considered the tourist version, but it was more appropriate for bringing our kids along. It cost $40 each, all of which funds the ecology department that leads these groups. It was interesting for our girls (ages 7 and 9) and two hours was not too long for them, but by midnight they were drooping and ready to be done. You can also work as a volunteer and go out with the staff from around 10pm to 5am and help monitor, mark the nests and take measurements to record the location.

I would say this is a once in a lifetime experience, but I have every intention of doing it again and in more places as we travel. Even as tired as we all are today, it is worth it to build that connection and understand more about the world around us. I told Jason last night, “This is what we need to be doing here, not going on boat rides and visiting tourist attractions, I want to find more programs like this.”

For more information on how to support the sea turtles on Cozumel or do one of the activities yourself you can contact them through Facebook, email or by phone below. They accept donations and are always in need of non-powered gloves, nest marking tape and spray paint.