We Made It To Mexico! 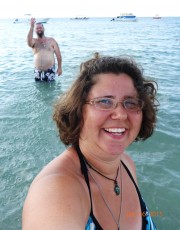 We made it to Mexico. Unfortunately, the internet at our house died the day before we arrived, so forgive my silence dear reader as we have had some kinks to work out (aren’t there always?) Hope you weren’t worried.

Moving to a tropical island sounds lovely, but the reality of living here instead of being on vacation brings a new set of challenges. We aren’t visitors who can brush off oddities as temporary, we have to adjust and adapt and find ways to accomplish daily tasks like laundry and work and shopping. It’s a different mindset, everything is more permanent. The language barrier is somewhat daunting, and I think the key for us is to go slowly and do a little each day.

We arrived last Thursday, unpacked a little, took stock of what came with the house and made a list of what we needed. Most things are included in a furnished place; there are dishes in the cabinets, sheets on the beds, towels for bath and beach and whatever else has been left by other tenants. After taking inventory there were groceries to buy, bank access to find, sunscreen, bug spray, kitchen towels, shampoo and soap, all the generic basics we left behind would have to be re-bought. We don’t have bikes yet so we’re walking or taking taxis.

The ocean being only 3 blocks away was too tempting, and before heading to the store we decided to go for a swim. A quick walk down Calle 5 where we found locals swimming just off the malecon, the sea wall along the water in the tourist strip. I look to the local people to guide me, and if this was a place they would swim then so would we. The clear turquoise water felt so good after our sweaty walk, and there was a little strip of sand to play in. We wished we’d brought our snorkel gear down (and haven’t left the house without it since.) I laughed at the girls exclamations of “It’s so salty!” as they puckered and spit. The sand sticking to their skin was another new sensation that will take getting used to, but overall they were thrilled. Welcome to the ocean!

When we finally dragged them out of the water we trekked about 4 blocks to the Mega (a big box store like WalMart or Target) and got some of the things on our shopping list and some food. My favorite Fuze tea with lime, Victoria (Jason’s favorite Mexican beer) a few staples for the kids like ham and cheese and cereal. It doesn’t take much to keep us fed and happy here.

We decided to splurge on a taxi to take us to one of our favorite places that’s further into town, La Jarocha. Ten pastor tacos for 60 pesos (which is still good, but they were 46 pesos the first time we came here 3 years ago) a wood oven pepperoni pizza for June (I know, but it’s what she wanted) and steak arrachera quesadilla for Rory. Cold horchata (I could drink it all day long!) beer for Jason and Mexican sodas for the kids. Food is a one of the things we love best about Mexico.

I was disappointed to see that the restaurant was in the middle of installing four large flat screen televisions all around the dining area. In the states this seems to be the norm in most places and it’s so distracting that it makes our family dinners a constant battle for attention. I was really looking forward to getting away from that. Cozumel is very Americanized, maybe having some of the things that we don’t like follow us here is just the price of having the conveniences of home.

Thinking it better not to get into the habit of taking taxis I suggested we walk a bit. I like walking around because it’s a great way to really look at a place; in a car or bike it all flies by too fast. What I didn’t take into account was that we weren’t used to walking around in the heat, and it is HOT here. Jason was melting, rivers of sweat rolling down him, and the kids were wilting in the humidity. We made it, but we were done for the day. When it rained the next afternoon the kids went out and danced in it, they were so happy for a break.

We like our two bedroom house, it’s comfortable and pretty and there is plenty of room for us, but it’s warm and the breezes seem to miss us even with everything open. We leave the a/c off during the day and use fans because electricity is very expensive, but at night we turn it on so we can sleep. Only one of the 3 air conditioners in the house works well, so until we adjust we are all sleeping in one room with the girls on a pull out on the floor. The “matrimonial” bed in that room turned out to be a lumpy futon and the good Queen sized mattress was in the room with lousy a/c, something we quickly changed. There is limited hot water, but honestly cold showers feel great. We not only shower to get clean but to cool off, usually multiple times in the same day-we’re the cleanest we’ve ever been!

We signed a rental agreement for 3 months, so this house is only temporary. The next one needs to have 3 bedrooms as guests start come, and we’ve decided a pool is going to be necessary so we can cool off. As soon as we have regular internet I’ll start house hunting again.

We’re in middle of the city but there is new wildlife everywhere. The neighbor’s puppy surprised us by appearing at the back door the first night and she’s quickly becoming a friend. There are geckos, iguanas, tiny lizards (anoles?) thumb sized hummingbirds, and that’s just in our backyard. The kids were thrilled with the coconut trees in the yard and I hacked one open with the machete we found in the kitchen (who doesn’t have a machete in their kitchen?) At the beach there is a whole new world that my Little Mermaids are dying to explore.

Life in Mexico is going to be different, and that was the idea. It will take us a while to sort out how everything works here but that’s the case any time you move somewhere new. It doesn’t feel foreign, though. As soon as we arrived I felt like I was back on familiar ground, and when I asked Jason he agreed.

June and Rory had a little meltdown the day before we left the United States. They were suddenly afraid, they didn’t want to get on the scary plane, they didn’t want to go so far away, couldn’t we just go back and live with Grandma until we found a new house? They have been so enthusiastic to come, but what traveler doesn’t have a bit of jitters the night before a big adventure?

On our second day in Mexico, back at the beach with our snorkel gear I asked them about this. “Do you still miss our big comfy house in Iowa? Anyone want to go back?” Eyes bugged out, both girls stared at me in disbelief and yelled “NO!” June announced that she loved the ocean and was going to stay in it forever, marching back into the water.

So even though there are some bumps in the road, we’re doing pretty well here in Mexico. Give us a few months to settle in and come see for yourself.