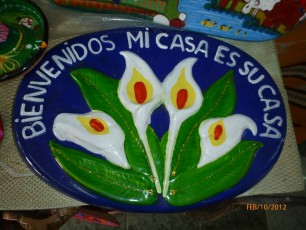 Hola friends! It’s been a week since we arrived in Mexico, and we’re starting to settle in. The food here is excellent, but we can’t dine out every night so I started cooking meals the last few days.

We’d been eating plenty of cold stuff; cereal, yogurt, deli sandwiches-when it’s 90F and 100% humidity cold food is awesome. We have plenty of fruit and veggies that we wash with special sanitizer before we eat them-not because they’re “dirty” but because we’re not used to the local bacteria and might get sick. We even have red apples with stickers that say “USA” on them, something the kids found funny.

The refrigerator is smaller so we have to be careful not to buy too much of anything at once or it won’t fit. If Jason buys a 12 pack of beer only a few can get cold at a time to save on space. Leftovers need to be eaten quickly to make room. We keep a water pitcher in the fridge, too.

Milk and eggs can sit out at room temperature here. The milk is pasteurized at ultra high temperatures so it won’t spoil, so it doesn’t go in the refrigerator until it’s been opened. In most countries outside the U.S. eggs are not washed right away so they keep a protective coating that keeps out bacteria and allows them to stay out of the fridge.

Everything is sold by the kilo; we take a wild guess and see how much 1 kilo of deli ham looks like, and it works. It’s still cheaper by far than what we paid in the U.S.

We are getting used to the heat now and cold food for every meal gets old after a while, so it was time to learn to use the stove. I say that like it’s this huge deal, but it’s just another anomaly of living in a different place.

Here my stove is smaller too, the little apartment size, and the gas tank for it is outside the house. When I want to cook I have to go out and turn the knob on top to “abrir” to open it. I then have to light the burner, something I’ve only ever done if there was a problem, but it wasn’t as dramatic as I first feared. No WHOOSH of flame, just a quiet flower of blue glowing under my pan. The house comes with some very nice pans with ceramic coating inside, thank you very much to whoever bought those! When I finish cooking I go back out and turn the gas to “cerrar,” shutting it off before I turn the burner off to let the last of the gas in the line burn out (Jason’s idea but I like it.)

There is a grill out back that we’ve been eyeing but it is rusty from lack of use. If we can find a new grate to put inside I think we’ll try using charcoal and cooking on it outside so we don’t heat up the house. Plus when I smell other people grilling it smells so good I want to climb over the wall and invite myself in!

On past visits I’ve seen locals cooking outside over little open fires in their yards and at first this seemed, well, “3rd world” but now I think it’s just smart. They aren’t paying for gas, they aren’t making their houses hot, and they are eating well. Just because they don’t have a fully equipped stainless steel chef’s kitchen doesn’t mean they aren’t doing just fine, and that’s what we’re striving for. We don’t need to eat gourmet meals, we just need to be fed and comfortable (and don’t worry Grandma, we are!)

In regards to keeping cool, ice cream here is so fresh and wonderful! We buy some every time we pass a store that sells it. I don’t even know what we’re ordering half the time but that adds to the fun and we all share so we can all try the different flavors. Yesterday I had a fruit bar of chopped up coconut (yummy and healthy!) and we all agreed the tiramisu ice cream was the best we’d had yet. Maybe someday I’ll do a post just on the ice cream (think of all the research tasting!)

So we’re getting the basics of cooking down, eating early and late when it’s cooler, enjoying our desserts and drinking lots and lots of water. The four of us go through a 20 L bottle almost every day right now!

Eventually I want to learn to cook some local food, maybe take some cooking classes here. Ceviche is my favorite, and it’s simple, and can be served cold…. I think I just found where to start.

What’s your favorite Mexican food? Can you make it?