Teaching the Cat to Fly 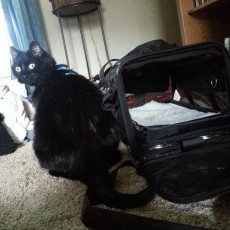 Part of moving to Mexico means giving up things we have here: our house, our furniture, our wonderful non-stick pans, our large paintings, most of our books (too heavy) and most of our day-to-day items including clothes and toys. I’m ok with that, and the kids have adjusted to the idea. It’s not taking the pets that has been the most difficult for me.

I was taught that pets are not a “thing” they are a living creature and you take responsibility for them for the duration of their lives. I don’t think I’ve ever given up a pet before, but we can’t take a dog, 3 guinea pigs, and a cat. We love animals, but it’s just too much.

I don’t want to make the kids give up all their pets, and I want them to understand the responsibility that comes with a pet. Too many people just get rid of them when they are inconvenient and I want my children to know that’s not ok. The effort I put into saving June’s scrawny baby chicken proves that I value every life, but we made the choice to travel and that means we can’t keep all our pets. We’ll be lucky to keep one but which one?

The guinea pigs would be hard to travel with and aren’t allowed to fly international, so they couldn’t come. Sadly we just never bonded with our dog so it will be easy to give him to a friend and I think they’ll both be happier. That only left the cat and we decided Stormy would come with us because she would be the easiest to care for and she’s very mellow so she would adapt well (and yes, because we love her.) That was before we realized how tricky it would be.

I thought as long as she didn’t freak out on the plane we’d just put her in a carry-on pet case, get a health certificate from the vet and it would be easy. I found us a flight that would mean a few extra hours traveling through Cancun to get to Cozumel but was half the cost, only $180 per person. Then I checked the pet regulations for that airline: $200 for the cat-more than any of us? For a space under a seat?

We also plan to travel for two weeks before we go, visiting family and friends to say goodbye. Where will Stormy be then? Can you camp with a cat? In the ten years we’ve had her we’ve never boarded her so I’m not ok with putting her in strange scary place while we visit everyone. This was looking a lot less easy, and we started doubting our ability to bring the cat, even proposing the idea of no pets to the kids to check reaction.

Then the first step of giving away our pets happened a few days ago. We gave 2 of the guinea pigs to a friend who will take wonderful care of them, and her kids will enjoy them and give them lots of love. Our girls were brave as we loaded their cages and supplies and said goodbye. Later Rory sat with me and cried for a while. I told her it’s ok to be sad, to try to remember that we found them a great home and they’ll have happy lives, and our friends will send us pictures of them. Still, I felt pretty sad myself, like I’d let those little creatures down by not keeping them.

I realized that taking the cat was not just something I was doing for the kids, it was important to me.

So I got online and looked for a different flight, one that wouldn’t take so long. The ADO bus we would normally take from Cancun doesn’t allow pets, so the flight would cost less but we’d have to take an expensive taxi to the ferry in Playa del Carmen. I decided we needed to fly into Cozumel, not Cancun, because even though it would cost more it would be shorter with less moving around that might be hard on Stormy.

I googled “where does a cat go to the bathroom when traveling” and found collapsible litter pans that people take into airport bathrooms while on layovers, and testimony swearing that their cats jumped right in and did their business (not so sure I believe that.)

I got her a harness so we could use a leash to keep her from getting away in a strange place (like the airport) and at first Stormy was offended but after half an hour she forgot about it. I bought a carrier and put catnip in it. While she hasn’t gone in yet, she rubbed all over it and that’s good, right? Next we’ll start putting her in it and going for drives to get her used to motion.

I had already been looking at pet friendly places in our house search but I had noticed it seemed to really limit our choices. Now I’ve decided that some things are worth the extra cost and effort. I have always had a pet and I think it’s important for kids to be around animals, to take care of something that depends on them. I love that our kids go to daycare on a farm so they are surrounded by animals there. When we gave away the guinea pigs I realized that I wasn’t ready to give up having pets, and I didn’t want the kids to have to either.

Before I was a nurse I was a veterinary technician, so I plan to volunteer at the Humane Society on Cozumel. The girls will be able to help out there too, playing with the animals to socialize them, and maybe we’ll be able to foster some of them. If we didn’t take Stormy we’d have plenty of animals to play with and take care of, but they won’t be ours. It’s different having your own pet, and it’s important.

It’s not going to be as easy as I’d hoped, but I still think we can take the cat. We’ll have to find a pet sitter when we take side trips around Mexico, but I know a little girl on the island that loves animals and wants to be a vet herself that I’m hoping will help out.

We are giving up a lot to be able to travel, but if there is something that you just can’t let go of you find a way to take it

We are giving up a lot to be able to travel, but if there is something that you just can’t let go of you find a way to take it (and hope that she won’t bother the other people on the plane too much!)