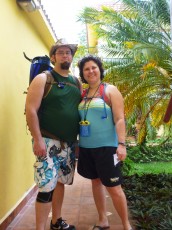 What would make our move to Mexico easier? A steady job. On Monday Jason is pitching our move to his employer to convince them he should keep his current position but work from remote, and it’s got us a little on edge.

There is no logistical reason why Jason can’t do his IT job from remote; his team hardly ever sees each other in person and the work is all virtual. They’ve all worked from home when the kids are sick or the weather is bad. The internet connections are good enough on Cozumel and he’s worked with people who were in other countries at other jobs so he knows the tools to use. Logically, his job doesn’t require his physical presence, but that doesn’t mean they’ll say yes.

I think it’s the idea of working from so far away that is hard for a lot of people to swallow. Can he really do the job if he’s living on an island in Mexico? Won’t he just be lying on the beach all day ? I know he can do it, and they may know it too, but in the end it will come down to whether their gut allows them to accept that this is possible. That you can have an adventure and still do your job.

Jason and I got the rough draft of his proposal done last night, and I’ll finish up the final version complete with fun pictures over the weekend. Doing this forced us to take another hard look at our budgeting, what our income would be, what our bills would be. I realized that a lot of our bills are based on our life here; car payments, home mortgage, water, electric, school lunches, and that will all be gone. Our bills are going to be easily cut in half when we move, and this was a big weight off of my mind.

People admire our plan to move to Mexico but immediately say “I couldn’t do that. I have debt.” Well we have debt too, and it’s going to follow us wherever we move and we’ll just have to figure out how to pay it (the same as we do here!) It’s my worst fear that we’ll get there and find that despite the lower cost of living we just can’t make ends meet and we’ll have to come back to the land of higher paying jobs and long hours. I don’t feel like it’s very likely, but it’s a possibility.

I’ve looked at our finances before, but I’ve never analyzed them the way I did this weekend. My focus was usually on what we can pay off, where we can save money, not what will cease to exist when we move. Seeing your bills lined up on a spreadsheet and checking off the ones aren’t going to exist anymore is actually pretty fun.

Then we compared that with how much he makes, and I realized if we can keep his income we’ll have more than enough. We already live cheaply and Mexico offers an even lower cost of living. We agreed that having job security would be worth taking on more costs ourselves, like buying his laptop and cell phone instead of using the company provided ones, flying him back on our own dime if there’s something big going on. Then we decided to play our best card: offer to take a 10% pay decrease if they’ll agree to our plan.

It seems so close, so doable, and I poured my heart into that proposal hoping to inspire them. There’s always the perk that they can stay with us and have a little taste of the dream themselves. The people in the office who know we’re moving to Mexico are excited, like, jumping up and down excited, but does that translate to being okay this kind of exception?

Jason is in a hard to fill position; they’ve been looking for more people to work with him for over a year and haven’t found anyone suitable. Every job he’s had he’s always one of the top guys, the one that people call when they have a problem because they know he won’t stop until he gets it fixed. His bosses know that. (Right? Right?)

Whatever happens, the thing that really allows us to move to Mexico, to travel and take the kids and do this thing that so many feel they can’t do is this: we’ll find a way. If Jason can’t keep his job it makes it harder, but we’ll find another way to make money and go anyway. There is a lot of freelance work out there and we have backup plans (I really like backup plans.) Our bills will come along and we’ll pay them each month- just like people do here except we’ll be living in a casita instead of a house. Our kids will grow and need new clothes (hopefully their parents will shrink a little and need new clothes, too.)

We’ll figure it out, we’ll make it work, we’ll find a way.

That’s what allows us to go more than any physical aspect of what we’re doing. That’s why if you want to follow your dream, whatever it may be, you can do it, too.

Fingers crossed. I’ll let you know how it goes on Monday.

Monday update: Oh my God we got it!  His bosses said they couldn’t argue, that our logic was great and they couldn’t find any reason he shouldn’t work from remote. That’s exactly what we were going for with the proposal!  I’m so excited, and frankly a little shocked. But in a good way!