The Falls Where Arnold Escaped Predator and the Slinky-shaped Roads of Chiapas, Mexico 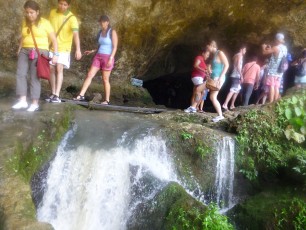 Chiapas is not for the faint of heart…or stomach. It is mountainous country, with curvy roads and aggressive drivers. On our trip to see the waterfalls of Misol-ha and Agua Azul I’m sure I would have been sick if I hadn’t taken some Bonine (for motion sickness) before we left. Our driver seemed to be in a hurry, and speeding along lurching from side to side around the tight corners I wondered if one dose was going to be enough for the whole day. I had only brought bare essentials because I knew we were likely to get wet, so all I had was my waterproof Panasonic Lumix camera and some pesos with a copy of my passport in a dry pack around my neck. If I had known we were driving on roads shaped like a slinky I would have added a few more pills, but it was too late.

My friend T.W. from Marginal Boundaries told me that they “make you stop” at Misol-ha as part of the Agua Azul tour package. He seemed unimpressed, but as we approached I knew it would be hard to top this for me: a huge waterfall pouring over a cliff with a trail leading underneath it. Apparently the claim to fame is that it’s the waterfall that Arnold jumped off of in the movie “Predator.” My companions didn’t want to get wet, but I love water and couldn’t wait to get up close and personal with la cascada. Introductions first; I went down the path in front of the waterfall to get a better look before getting all up in her business.

It had been raining so the water was muddy rather than its usual bright blue, but I didn’t mind. Spray blew across the pool and cooled my skin as I snapped pictures with a small gathering of other visitors. I could see tiny colored dots in a line from one side of the cliff base to the other, people hiking the trail underneath the falls and up the other side. Getting-to-know-you complete-that was where I wanted to be.

At the top of the trail a sign said “10 pesos per persona entre la gruta.” I didn’t know what a “gruta” was, but T.W said he had it covered, so off we went. Rocks jutted out from the sides and poked up from the middle of the paved trail; they hadn’t smoothed it out, just worked with the landscape as it was. I loved that. The closer we got to the waterfall, the wetter the trail became. Water burst out of the cliff in places and ran down the steps ahead of us. T.W. and Chris got ahead of me, then decided that even with her umbrella they were getting too wet and cold, so they turned back. I waded on through the mist, determined to see the other side.

The trail led down and across, a good distance behind the falls themselves but soaked by the constant spray. I was getting wetter and wetter, but I couldn’t wipe the grin off my face. Small waterfalls sprung out of the walls and crossed the trail, making excellent photo ops for soggy laughing visitors. Everyone wore a smile as they splashed along.

Once I passed under the main waterfall the trail began to climb. I had to wade across a rocky stream and then followed it to its’ source at the top of the trail. This was “la gruta,” a cave with a small river running through it. For 10 pesos you can enter, but I could see people weren’t going very far and it was crowded, slow going. Our driver had given us 45 minutes to explore and I was down to 15, so I decided to skip it. I scooted carefully across the planks that formed a bridge at the mouth of the cave and started back.

I was completely soaked when I came out at the top where T.W. and Chris were waiting for me. I demanded a hug before she could think about it and laughed when Chris cringed at my clammy skin and wet shirt.

We braced ourselves during more frantic driving, climbing higher into the mountains. One couple had been late returning so the driver was really rushing now. Suddenly we came to a stop in a little settlement, maybe a dozen houses visible along the highway. There was a roadblock of men holding a thin rope across the road, planks full of nails laid down so no one tried to break through. The legendary Zapatistas, indigenous rebels who wanted the government to leave their lands and culture unmolested. I didn’t know very much about them, but I knew there had been violence in the past so I was nervous. Our driver had no such fears; he jumped to the head of the line of cars and asked the man what they wanted. Sometimes they take goods off the trucks, sometimes they stop everyone until a demand for attention from a government official is met, but today they wanted cash: 5 pesos per person. We had 13 people, so that meant a total of 65 pesos-just over $5.00 U.S. We paid, they gave us a typed copy of information on why they were protesting today and pulled the rope out of the way to allow us through. I wondered what happened to the people who couldn’t pay, as Chiapas is very poor.

At Agua Azul we would have more time, so the first thing we did was eat at the first restaurant we saw. Whole fish pulled from the river and fried with garlic, delicioso. Children had appeared as soon as our van arrived, pouting with big brown eyes and asking us to compre platanos, buy the bunches of bananas they carried in plastic bowls. I didn’t have a bag to put them in and resolved not to buy any until we were done seeing the sights, but Chris gave in to a pretty little girl. That girl must have bragged to her friends as there was a small stampede of children to our table shortly after, and when we wouldn’t buy their bananas they tried to demand 5 pesos for taking pictures of them. The indigenous people do this all over Peru; maybe word had spread here. Chris refused and we ignored them until they gave up and went looking for easier marks. How many bananas did one person really need?

There is a town all along the river that forms the waterfalls of Agua Azul. As we walked the river was on our right and the many stalls of the local artisans and vendors on our left. It is the low season, so about a third of the stalls were empty, but in high season they are all full. They weren’t very aggressive, but if they caught you looking they pounced on the opportunity to sell, so I focused on the falls instead.

Here the water was a color I’d never seen before, bright turquoise pools with white frothy cascades over rounded beige rocks. I wondered if the round shape of the rocks meant they were too hard to wear away or if they were so soft the whole thing gave way instead of just forming an outlet for the water. It was beautiful, a tropical oasis that no resort could ever hope to duplicate. I always wonder at sights like this if the people can appreciate what an amazing place they live in. We climbed between the water and the people along a wide paved trail, sometimes together sometimes on our own.

At the top of the trail I found another swimming area and decided to get in. It was surprsingly cold, and I managed to stand with the water touching my ribs but couldn’t bring myself to go deeper-I really don’t like cold water. I could feel tiny fish nibbling on my toes, although visibility wasn’t good enough to spot them. There was a black chicken pecking around near my clothes on the bank; the only beach around with chickens! Climbing out to defend my things I saw the couple who had been late earlier just stripping down to get in and checked my watch: 20 minutes and a big hill to get back down. I doubted they would make it.

Meeting Tim and Chris back at the bottom pool local boys posed for us on the rope swing, competing to provide the best action shots as we snapped pictures. Children with bananas appeared again with their sad eyes, and I bought a bag of fried plantains now that we were done hiking. Christina gave in and bought another fresh bunch. I noticed a girl about the same age as my Rory off to one side, crying as the others bragged about their sales. I asked Chris how to say “don’t cry” in Spanish then ran back and bought a bunch of her bananas, saying “No llores” until she managed a little smile.

What might my girls’ lives have been like if they had been born someplace else? Would 5-year old Rory be selling bananas to tourists and practicing her sad eyes? Would 7-year old June be in school or have to work at home to help her family? Would 17-year old Chenoa be married and having kids of her own? It wasn’t uncommon to be married by 14 or 15 here; as soon as girls start looking like women they are treated like one. Where we are born determines so much in our lives, and it’s all a matter of luck and fate.

As we rode back in the van the driver was less rushed. The Zapatistas had gone home and the road was clear. I thought about the similarities I saw in this place, reminding me of growing up in the Ozarks in Missouri, of my visit to Ignazu Falls in Brazil, of the highland people in the Peruvian Andes. It really is a small world, but at the same time there is so much of it.