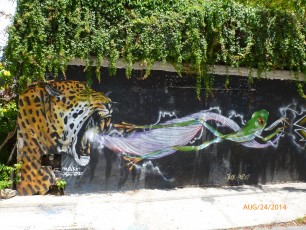 I feel a hissy fit coming on, so if you are looking for another post about what fun it is to travel the world, to get out of your comfort zone and challenge yourself, you might want to look away while I stamp my feet a little.

There’s all these happy, awestruck travelers out there blogging away about what fun they are having. They don’t run out of money, they don’t find themselves stranded or in a scary hostel, they just have good times! Rarely do I read anything that says travel is less than amazing, an article that says Holy Crap! This Place Sucks Do Not Come Here! Apparently these people are all much better travelers than I am or they just keep their mouth shut better than I do, because I could write that article (Jamaica springs to mind.)

I learn something about my travel habits on every trip that I take: it was Costa Rica where I learned that I like to travel and get outside the box, Jamaica where we learned that sometimes if you aren’t having any fun it’s better to just go home, and Peru where I learned that a lack of freedom makes for a stressful trip (that one was a 17-day group tour.) There are always blissful, inspiring days, but it’s the hard moments that can be the best lesson. My journey through Mexico has been no exception: I have learned that traveling alone sucks.

All those perky bloggers talking about plumbing the depths of their own soul while they’re out there alone, making new friends everywhere they go-I’m calling bullshit. That’s held true in a few shining moments but there’s been a lot of lonely times, and some scary moments. It’s low season so there are fewer travelers, and those there are have usually brought a travel buddy with them. Meeting Tine in Cancun and then in Tulum was a life saver for me, a friend when I desperately needed company.

I miss my family horribly. Maybe that’s why there aren’t a lot of Mommy-bloggers off traveling without their families. I realized in Tulum that this trip has been haunted since I got on the bus at the Cancun airport-the same bus that my family and I took to Playa del Carmen when we were here together last year. I see my Rory making sand castles in front of El Castillo in the ruins of Tulum, Parilla Argentina steak house that my farm-grown husband was so impressed with, and snorkeling I think of Chenoa learning to free-dive, standing on her head to get a better look at the fish. I order a drink and think of June saying “limonada por favor.” How they would have loved the cats living outside my casita in Palenque! I see them everywhere, but I am here alone, and it’s no fun to do these things and see these places if there’s no one to share it with.

I know a few people here on the island, people who live here and have lives here that they cannot drop just because I’m visiting. I thought I would have company here, but I find I am still alone, wandering an island mostly empty of tourists and looking into empty restaurants that no one local can afford to eat in during these lean times. It’s too depressing to sit in them by myself, even though I know they could use my pesos, so I go the grocery store instead.

Go ahead, tell me to suck it up, that I’m in Mexico for Christ’s sake! I know it, but it doesn’t make me any less unhappy.

The only way I can see traveling alone as being comfortable would be if you are used to living alone. Tine is close to my age but single and without children. She is used to living alone as an adult. When we talked about the ages of my children I realized I have never been truly alone. I got pregnant when I was 19 and went straight from living with my parents to being one. I have always been surrounded by family, which is probably why I miss them so much now.

Travel is always full of unknown bumps and surprises that you have to deal with; I’ve had no hot water, huge bugs in my locker, a hostel that locked up by putting chairs against the inside of the doors at night and all sorts of bus station stress. But today was the last straw.

I love sea turtles-I have one on a cord around my neck that I’ve worn day in day out since I first dived with them two and a half years ago. I’ve wanted to volunteer with turtles during nesting season for many years, even before Costa Rica. Usually we travel in the high season when the turtles are not nesting, but this year I’m here at the right time. I could finally do it!

My friend Cindy is the volunteer coordinator, and she messaged me that she would be helping dig out the nests today, yay! We would dig down deep into the hatched nests to rescue any baby turtles that were stuck, then release them all at sunset into the ocean, a beautiful experience worth perky blogging about. However I didn’t budget for the expensive transportation to the other side of the island, and I’m starting to run low on funds until I meet up with Jason in Cancun. I was worrying about how expensive a taxi would be at breakfast and asking Chuco, the owner of my B&B what he thought. He offered to take me there and back in exchange for 100 pesos in gas money-a good deal, and I was relieved.

I rode my bike around town taking pictures (alone) did a little snorkeling in my favorite spot (alone) and then came back and got ready to go, saying hola to Chuco on my way in. When I went up to the front again half an hour later he was gone. I looked, I called his name, but he was nowhere to be found. After 45 minutes I knew that I had missed the orientation session required before the work and it was too late. Such a disappointment.

Chuco showed up about 2 hours later, asking if I was alright (I had cried a little.) I told him we missed the turtles and he laughed. Laughed. He said I hadn’t come back out and he thought it was getting late so he went in and laid down for his siesta. He had gone and taken a nap without saying a word.

We argued a little about what times we’d agreed on, he said it would take 30 minutes, no 45 minutes, maybe an hour to get there, that I had not come up in time to go anyway. I have driven on this island, and I don’t remember it taking that long to get around-it’s just not that big. He said maybe we could go now. No, I explained I had missed the training session. He shrugged. Well maybe another day he could take me-as if I still trusted him for a ride.

I had messaged Cindy that my ride had fallen through, and she said that the turtle conservationists dig out the nests every afternoon, just go over and look for the black truck. The idea of doing it with strangers, of struggling to get there just to be alone again with only strangers, it was too much. I’ll wait and work during the next turtle nesting season when my kids can be here to share it. It won’t mean as much when I’m alone, no matter how much I want to do it.

While I’m here I wanted to look at rentals for our move and get specifics on visas, but when I ask they say I’m too early, that I have to wait to do these things until closer to our move, that I should talk to the Mexican consulate at home in the U.S. about visas. So I don’t have any busy work to do toward moving except the online research I was already doing at home. Cozumel is familiar, but it’s a ghost town right now; shops close early or are empty, no one wants to meet up. Even here on the island that I love I find it’s not the same when I’m so alone.

So that’s my lesson this time around: I hate traveling all by myself. It’s lonely and it’s hard and some days I can overcome it and push through, but today I can’t, and if Jason wasn’t coming to meet me in Cancun in a few days I think I would just go home. I hope tomorrow is better.