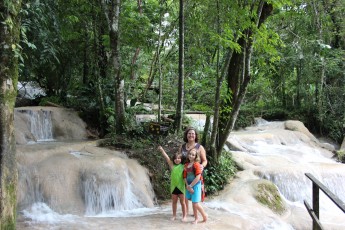 Sorry for the delay but yesterday was Rory’s 7th birthday and I take the day off for birthdays. Back to the Visa Run Vacation: Our first day of touring we were up early ready to meet the tour group we would be with for the next 6 days only to find the people in our group a surprise.

The manager from OTC tours met us in the lobby where we gladly handed over the remaining half of the cash we owed. He started to count it, looked around and thought better of it and handed it to the woman next to him who stashed it away in her purse. Apparently they don’t like carrying that much cash either.

We were led outside where I saw a huge tour bus waiting at the curb. Jason and I were both impressed, I had expected vans like I had toured in last year with Marginal Boundaries. I was debating if it was silly to snap a picture of the bus when the manager walked past it and we realized it wasn’t for us. Maybe a van after all? No, he brought us across the street where our driver, Jose, waited by a white 4-door, the Mexican version of a Ford Focus. The “group” was just us.

I was a little disappointed that we weren’t with other travelers. I wanted my family to meet other people, backpackers and European adventurers, people like us. It was very quiet in the car. Jose didn’t speak much English and our Spanish is pretty basic for conversation, and I felt sorry for the guy having to drive around a family of boring mute tourists all day. The girls turned on Percy Jackson on their ipods and settled down for the 2-hour ride to Palenque. Before long June was slumped against me with Rory resting on her, both dozing.

This was the first time we’d been in the state of Tabasco and Jason and I both enjoyed being able to look around while someone else did the navigating. Road side stands full of household goods and various foods were just outside our windows when we passed through towns while fields led off to green mountains further away. It is beautiful country, once again reminding me of southern Missouri where I grew up.

We chose to pass on through Palenque rather than stop at the hotel and went straight on to Misol-ha, a waterfall I was delighted with on my first visit to Chiapas. You might remember that it’s most famous for being the place where Arnold Schwarzenegger escaped in the movie “Predator” by jumping from the top. Only 20 km away from town, the waterfall is 35 meters tall and the pool below is often made turquoise by the high mineral content.

When we got out of the car Jose told us that we could stay as long as we liked, 1 hour, 2 hours, whatever, a definite perk of being the only people on the tour. Usually there are time limits so the group can move on.

The girls wanted to get in and go swimming but it was still chilly after the rain so they focused on the rocks instead. Anyone who thinks that kids need complex toys to be entertained has never seen my girls play with rocks. They climbed every one of them, shouting about how far they could see downstream while I stood below ready in case of a misstep. They are fearless and fairly skillful climbers, due in part to all the time they spend on the indoor rock wall at Nuncajamas. I had to resurrect my own outdoor skills to keep up with them and was reminded how fun it is to hop around on top of rocks.

There was a local who seemed to be a kind of safety guard, whistling at people who crossed the barriers under the waterfall to take risky pictures.  At first he worried over my girls, then seeing their skill he sat back and smiled ear to ear as they scampered up next to him on the tallest rocks. June was so sure-footed we started calling her “Goat Girl” and he joined in making goat noises at them. 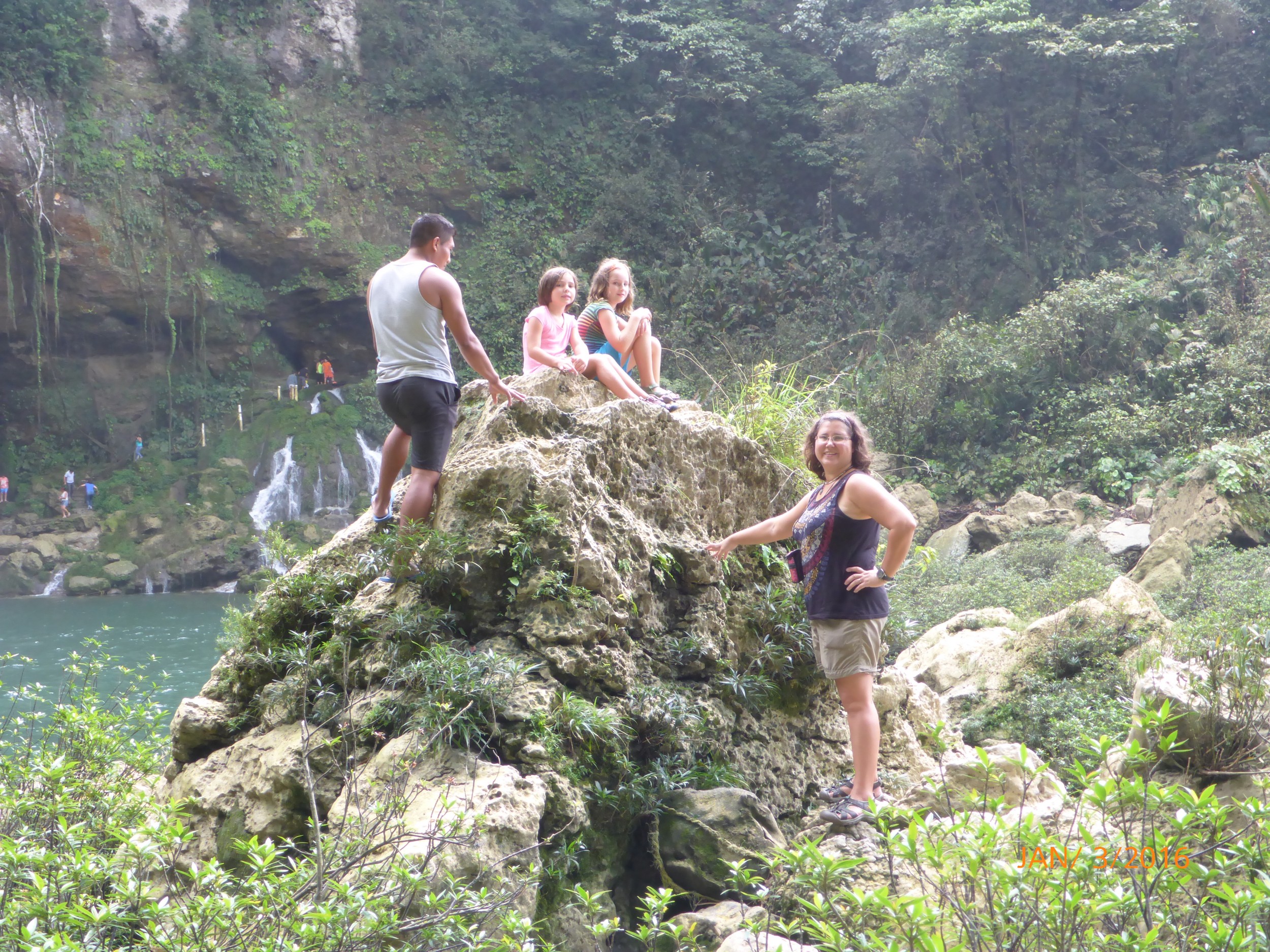 We visited the rustic bathrooms, paying 5 pesos each again. I listened to the two women talk and tried to catch any word I knew but they must have been speaking their native indigenous language, something not uncommon in Southern Mexico. 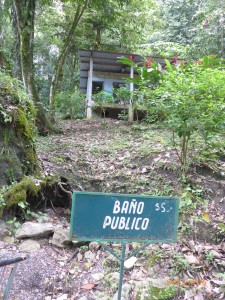 My favorite part of my last visit had been the path under the falls through the mist. It hadn’t lost any of it’s magic, and the girls squealed and pointed out plants and small spouts that poured through the rock. 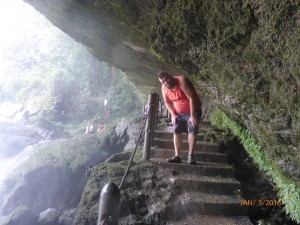 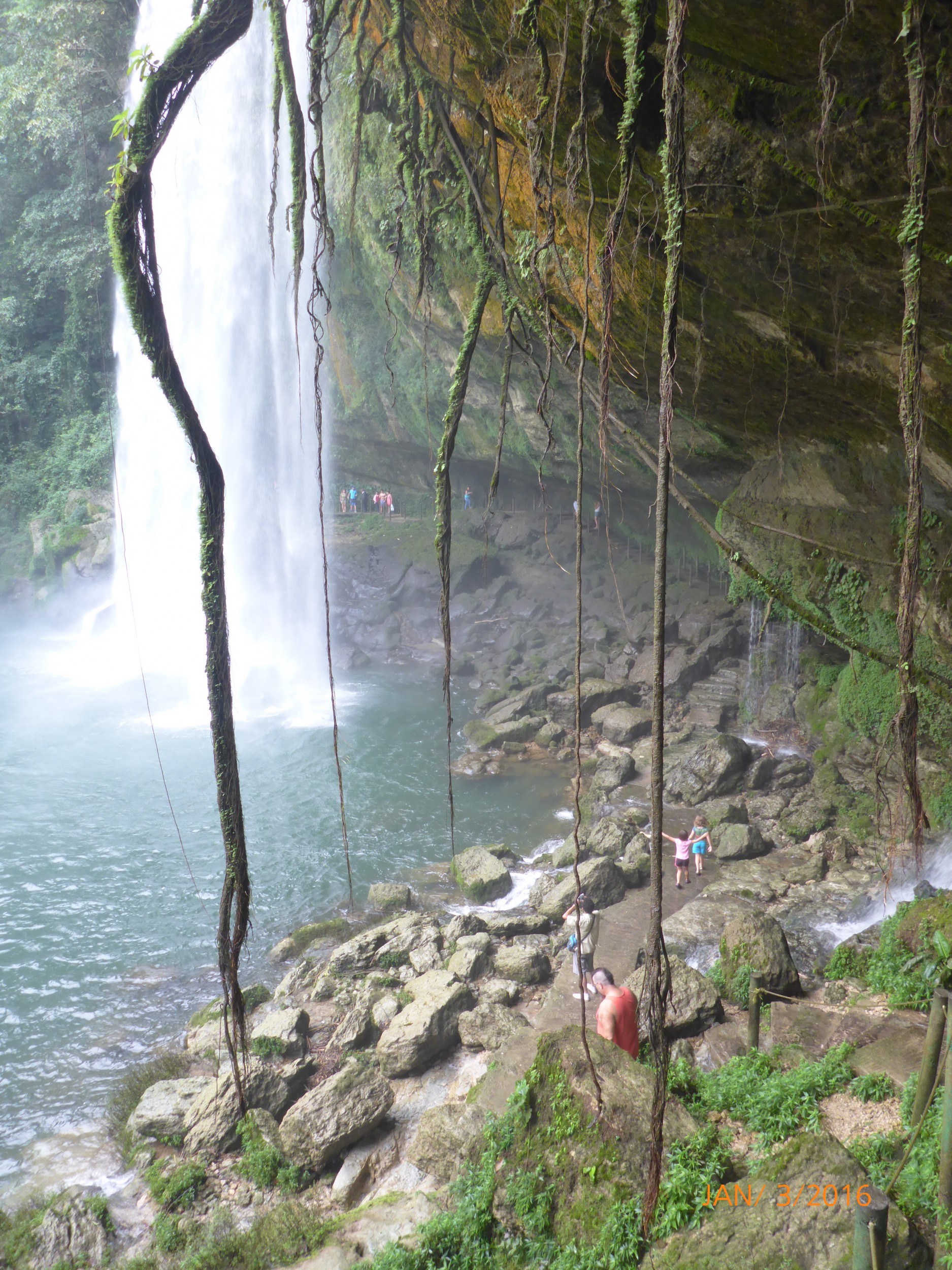 At the top was the cave that was the source of a side waterfall. It is 10 pesos per person to go in “la gruta” and I hadn’t done it before but we had plenty of time. They gave us flashlights and we started off only to be stopped and told to wait for our guide. It’s slippery walking, sometimes on boards and sometimes in the water itself in shallow areas, and we climbed over rocks to get to the back. The guides work for tips but he was well worth it, helping watch my children in the dark and pointing out fossils, stalagtites and stalagmites, and bats. We love bats. 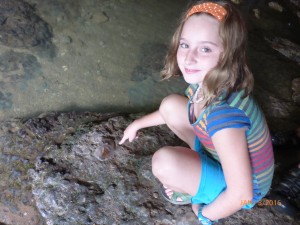 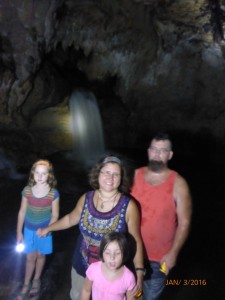 Thinking the cave didn’t go far I was amazed to find another waterfall in the dark that emptied into a pool 9 meters deep; a small secret waterfall underneath it’s famous big brother. Our guide took multiple pictures for me. Definitely worth the 10 peso entry fee, plus we tipped our guide well.

We went back down to the pool to climb the rocks one more time, then left after a little over 2 hours well satisfied.

It would be another hour of driving to Agua Azul up through the mountains past vertical corn fields and small villages. When I was here before our van was stopped by Zapatistas and we had to pay 5 pesos each to be allowed to pass, but today there was no organized roadblock. Going in and out there was a woman and a few children holding ropes across the road, but our car charged them and the rope dropped or was pulled up at the last minute, the cars and the women playing a game of chicken to see who would back down. The big road block had been men with boards full of nails to physically prevent vehicles from passing and the whole village had been there. These women were alone, and I wondered if the lack of respect was because they were women or because their simple ropes were not enough of an incentive to stop. Not for the first time I wished I knew more Spanish so I could ask Jose more about it.

When we slowed in the villages children came to the sides of the car selling peeled oranges and dried bananas, sometimes beating on our rolled up windows. I remembered the children that sold things in the markets of Agua Azul and the resemblance to my own girls in age. June and Rory were not bothered by seeing children working like this but seemed to admire them, even though I told them the kids likely wouldn’t get to keep the money.

When we reached Agua Azul it was well after noon and we decided to eat first. Our lunch was included in the tour, so Jose took us to an empty restaurant at the foot of the falls where we had soup and grilled chicken or fish, simple but filling. Then we struck off walking up the series of waterfalls, again without a time limit (I really loved that.)

first swimming area was full of people-it was Sunday, family day in Mexico, and everyone was out enjoying their day off. The girls begged to go in the water despite complaining about being chilly before, so I finally said just get in if they wanted to, clothes and all. Rory swam, June waded, and they played happily in the mud beside the bright blue river. Jason bought a michelada that turned out to be made with sticky strawberry syrup and was one of the most disgusting things he ever tried to drink.

When I came here before it was August, slow season, and many of the sales booths were empty. This time the place was packed with sellers and tourists vying for pictures in front of the scenic views.  We bought a few small things, waited a few times to try to grab photos in front of the best falls, then tired of the crowd and decided to get further up the trail.

June pouted when I didn’t let her climb over fences and go out into the water like other visitors. I knew that these falls can be dangerous and people drown here every year, but try telling an immortal 8 year old that. 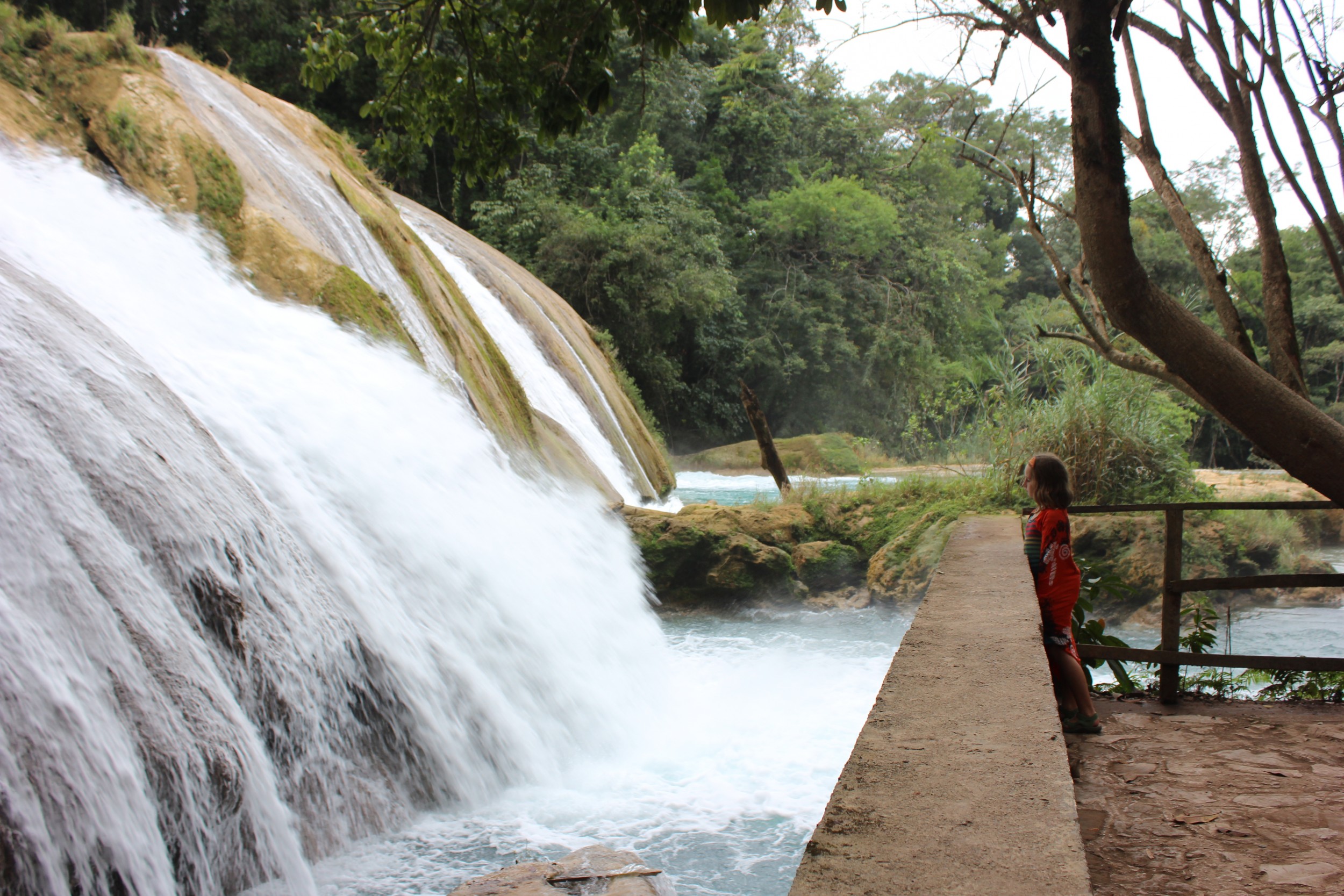 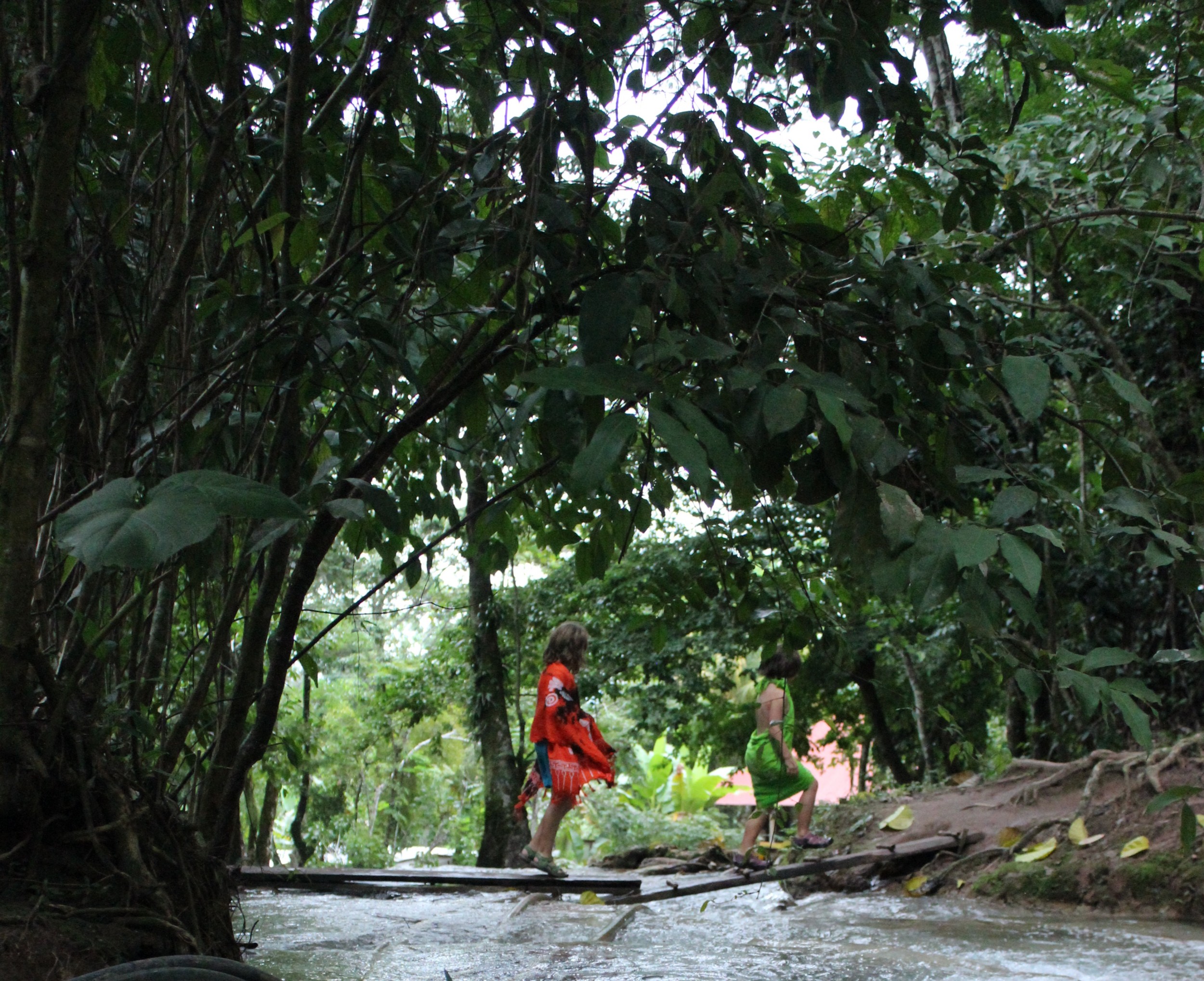 The girls used my Panasonic Lumix camera to take pictures (it’s waterproof and shock proof, or as I call it, kid safe.) They worked on composing shots and including me in some of the pictures, a rare thing since I’m always behind the camera.

We walked further and found some places I had missed in the time crunch last time, not coming back down until it was close to dark. Jose met us with the car, seeming relieved. He probably didn’t realize when he turned us loose that we really would stay all day.

Jose had told us he lived in Palenque and as he zoomed around other cars in the growing dark I considered asking him if Chiapas was dangerous after dark, if he was worried. I decided that I didn’t want to be that kind of tourist, always worried about danger. I believe that most people are good and helpful and honest, and I wasn’t going to doubt them just because it got dark. We got to our hotel without incident and Jose checked us in and said he’d be back in the morning at 6 am.

The Hotel Tulija Express has a pool and Jason took the kids out to swim but came right back dripping freezing cold water. After hot showers to warm them up we went down to the on-sight restaurant, Mexico Lindo. Hungry from our busy day I didn’t notice until I’d eaten 2/3 of my chicken that it wasn’t completely cooked. Jason and the kids’ meals looked fine, but Jason was up half the night with stomach problems (I will spare you the details.) The hotel was nice enough, but we didn’t eat in the restaurant again even though we stayed there 2 more nights at the end of our trip.

Tomorrow: the ruins of Yaxchilan and Bonampak.