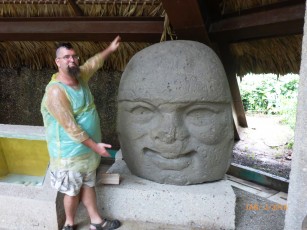 After taking a spontaneous taxi tour of Villahermosa in search of rain ponchos we finally gave up, only to find them at the gate to the place we wanted to go, La Venta Parque Museo.

They were not quite what I expected, but after 6 months in Mexico I should have known they would be a tight fit, with sleeves instead of the loose drape that I envisioned. No way would they cover a backpack if we wore them, but they kept us from being completely soaked and that was good enough. We checked our packs at the ticket booth and went in.

La Venta Parque Museo is best known for the huge Olmec heads from a civilization that pre-dates the Maya. In addition to the archeology displayed it also celebrates the local natural habitat with a zoo all in 8 hectares of botanical garden setting. They are open 8-4 daily, and entrance fees are 35 pesos for locals, 40 for foreigners, and 10 for children. The map was an additional 10 pesos, well worth it for my kids to track our progress.

When you enter it’s the animals that you see first. Spider monkeys are right inside the gate, and sometimes wild ones make an appearance in other parts of the park. For no extra charge we held a 2-year old crocodile and an albino python in the reptile house, all of us marveling at their strength and beauty up close.

Rory has a thing for pigs, so finding a herd of Peccaries nearby got her very excited. We decided the large herd must be females and babies because we found a few more pigs scattered in solitary enclosures throughout the park that we knew were male by the strong smell. They were friendly, lifting their faces to wiggle pink noses at us.

A large dome houses the aviary where birds are loose and the people walk along paths to see them. June loves parrots and begged for one as a pet (again) and we reminded her how smart they are, like a 3-5 year old child, and how they live in flocks and mate for life. Being kept as pets is so unnatural for them it’s no wonder they pluck their feathers and bite to show their stress, and I will not keep one. I hope that we can find a place for June to volunteer with parrots as we travel so she can work closely with them without imprisoning them as her pet, but right now it’s hard for her to understand.

There are large cages with large and small cats; ocelots, tigrillo, a black jaguar and two spotted ones. While still at the small cats we heard hoarse calls that I thought were howler monkeys, but when we got closer we found it was the black jaguar. It was alone, pacing and seemed to be calling, and the girls talked to it trying to soothe it. People leaned over the railing and put their hands on the chain link fence enticing it to jump up and try to reach them with claws and teeth. I wished there was some staff nearby to make them stop. The black jaguar seemed sad and lonely, while the spotted jaguars next door ran and played together.

It was close to lunch time, so we decided to check out the snack stand and found they made burgers and hot ham and cheese sandwiches, perfect for the chilly day. While we ate we met another traveler, Tracy from England. She and I talked for at least 30 minutes about our travels as she had been in Mexico since before Christmas, a woman just a little older than me traveling alone. She was headed to Cancun on the bus that night so I gave her suggestions on what to see in the area, recommending she go down to Tulum to see the cenotes and if she visits Cozumel go on Sunday when there are no cruise ships and less crowded beaches.

After lunch we headed off to the archeological area that makes up the second part of  La Venta. The olmec relics here were found within the state of Tabasco and the locals are proud. Some of the pieces have been taken to museums in Mexico City so there are some replicas among the real pieces, but we’re not picky, we like it all. 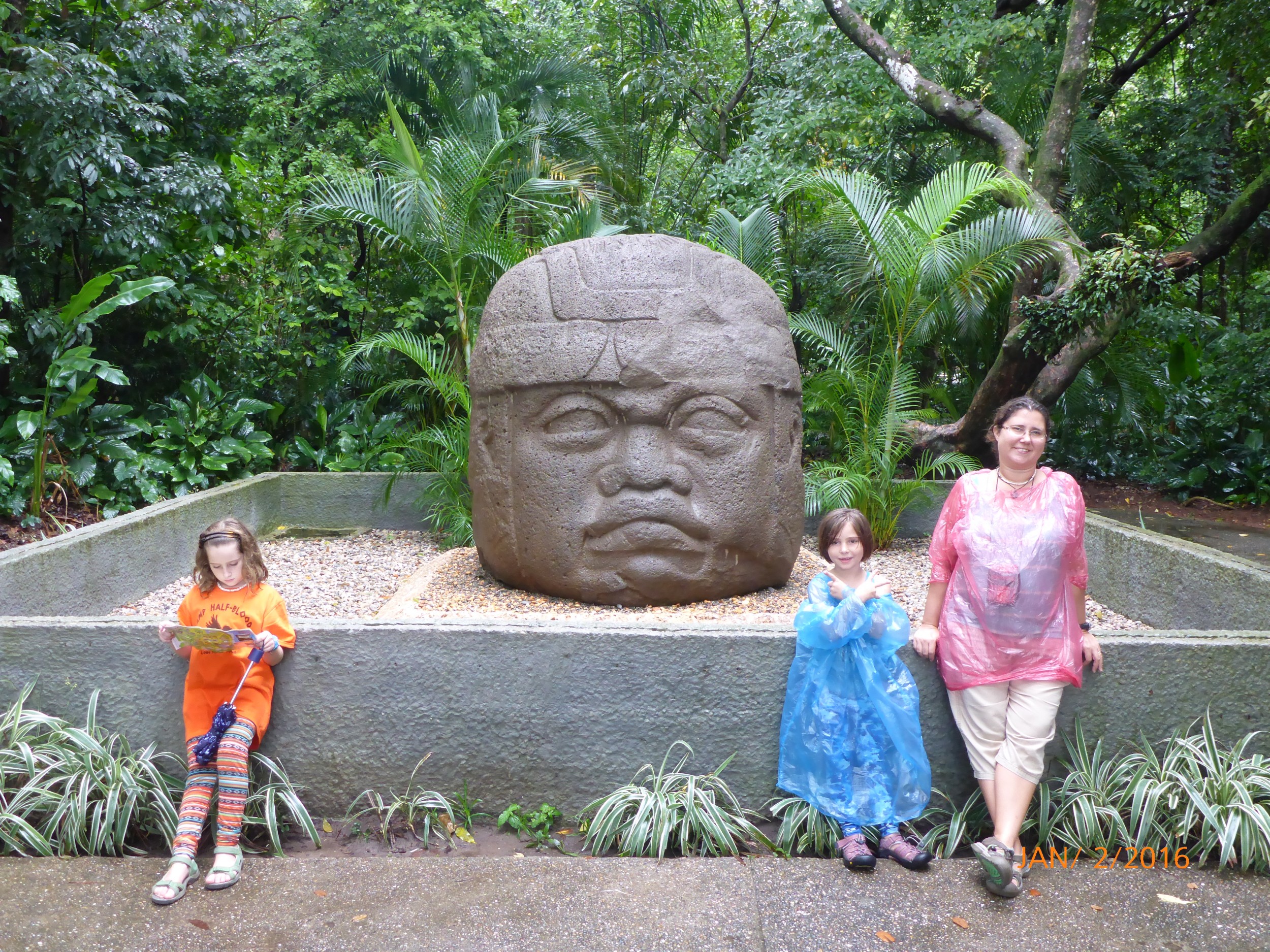 Non-threatening animals are allowed to run loose in the park and we found a large family of coatimundi near the back of the trail. I counted at least 30 moving in the trees and they were not afraid of humans at all. We learned when coatis visited our house in Cozumel that if they get too close you can stomp your feet to scare them back-Rory did it and scared about 10 at once, including a baby who scampered a few feet up a tree, making us all laugh. I posted a video of them here.

At the furthest end of the park we found the second black jaguar, also crying and pacing. We wondered why they were separated and talked about possible reasons. “Maybe they’re sisters and they were fighting like we do sometimes.”

A series of suspension bridges lead through the jungle, fun to jump on even in the rain. The last display shows the biggest predator in the world, a lesson we all need to be reminded of.

Another taxi back to the Mission Villahermosa Express where it was finally time to check in. The room was simple but comfortable, two double beds and a bathroom for about $50 usd per night. The view was interesting from the 5th floor looking out over the rooftops and laundry. We were in the historical district, but the pretty fronts seemed to be more of a facade and I wondered how historical it really was.

We realized we hadn’t wired ourselves the money we’d need to pay the driver in the morning yet. It was Saturday and all the banks that I’d seen nearby when I’d checked the map were closed for the afternoon so we set out to find an Elektra store where we could pick up the money.

The lines were long, we were all tired and hungry, and when we finally got to the front the guy shook his head and pushed my passport back at me. My limited Spanish made it hard to grasp the problem, but apparently we were trying to get too much money. We were well under the limits of both Xoom and Elektra so I didn’t know what to do. Frustrated, we stepped out of line. Jason called Xoom customer service while I tried not to have a public break down. If we couldn’t get money our trip was as good as over.

Rory fell asleep in a chair while I talked to the Xoom rep on the phone. She went over the limits, and I insisted that we were not over any of them. She suggested changing my address to Villahermosa, which seemed ridiculous but I didn’t have any other ideas so I said sure and got back in line. I hoped I’d get the other window, but I got the same guy again. I was sure he’d just say no again, but amazingly it worked. Then he got me out a pile of cash that was a little nauseating to have to carry in public. I counted as he counted behind the safety of the glass, then crammed it in my bag and told Jason we had to take it back to the hotel before we could do anything else. He scooped Rory up and we all but ran back to the hotel.

It was getting dark by the time we got the money put away, and I wanted to see the Zona de Luz pedestrian district that I’d read about so we went back out thinking we’d eat there. We followed the dot marking it on Google maps but found only dark local bars in an area that didn’t seem wise to be in. Kids whining for dinner, we retreated back to the familiar and well-lit historical district streets.

The first place we found to eat was a VIP, which I have never seen but reminded me of Perkins and had a playground for the kids after our long day. Perfect. The food was good, and the sangria was welcome.

Back at the hotel we ran into Tracy again. We had told her where we were staying and she was camped out in the hotel lobby waiting for a ride to the bus station. It seemed ironic that she was going exactly where we had just come from. 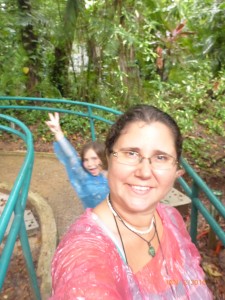 Glad to have beds to sleep in and hot showers we relished the excitement of being on vacation. Before bed we packed everything up so we would be ready to get up early and meet our tour group at 8am.