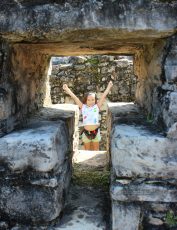 I first went to Palenque in 2014 to meet up with two strangers who would become my friends, Tim and Cristina of Marginal Boundaries. It was my first solo travel, my first venture into Chiapas, and my first Mayan ruin outside of the popular ones on the East coast. Right away Palenque became one of my favorite places, and I couldn’t wait to take my family there.

The stress of renewing our visas was over and we were free to enjoy the last few days of the trip. We slept in a little, had breakfast around the corner, then met our driver from Operadora Turistica Chambajlum. He started to go over the plan for the day, saying we’d have 2 hours in the ruins before he picked us up. My husband Jason and I exchanged a look; I had requested we be left at the ruins and that could be the end of their responsibility for us. Having been there before I knew we could easily take a colectivo van the 5 miles back to town for 20 pesos each (10 for locals but we aren’t local) and we didn’t want to be rushed.

Before I could protest he asked where we wanted to eat our lunch and offered two options. I had been told lunch wasn’t included today, but if they wanted to give us another lunch of course we wanted it. I explained we wanted more time at the ruins, negotiated with the driver a little, and we agreed that he would come pick us up at the museum at 2pm instead of noon. Sometimes it pays to be the only ones in the tour group.  We had four hours to explore the ruins and museum but it was still barely enough for us.

The entrance brings you onto a large open plaza and the size of the place is immediately stunning. Nearly all the structures are climbable, which we love so we can get hands-on with history. It’s best to go earlier if you can to avoid the hot sun, but parts of the ruins are still sheltered in the shade of ancient trees. The variety of the structures and closeness to the surrounding jungle is part of what I love about Palenque. 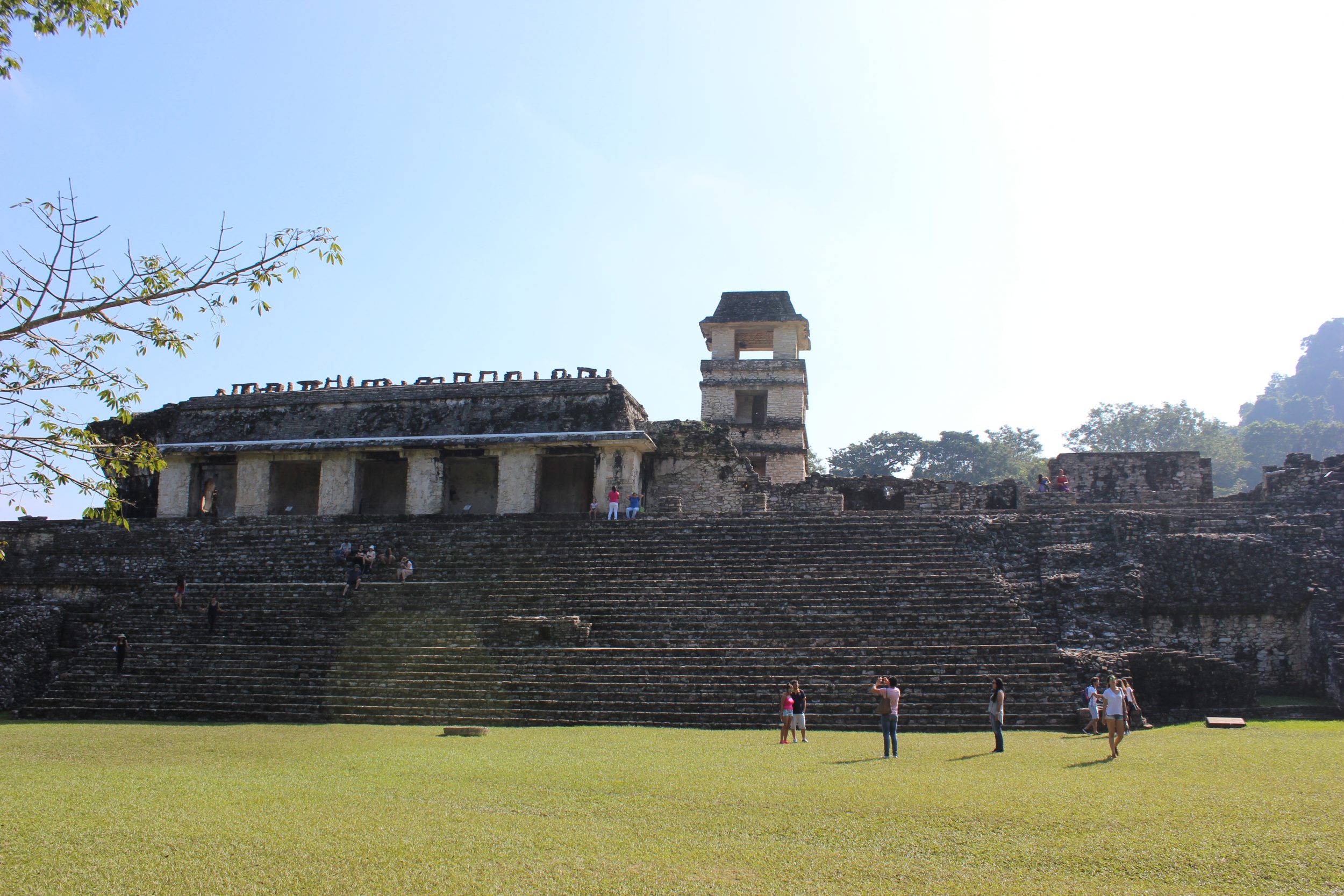 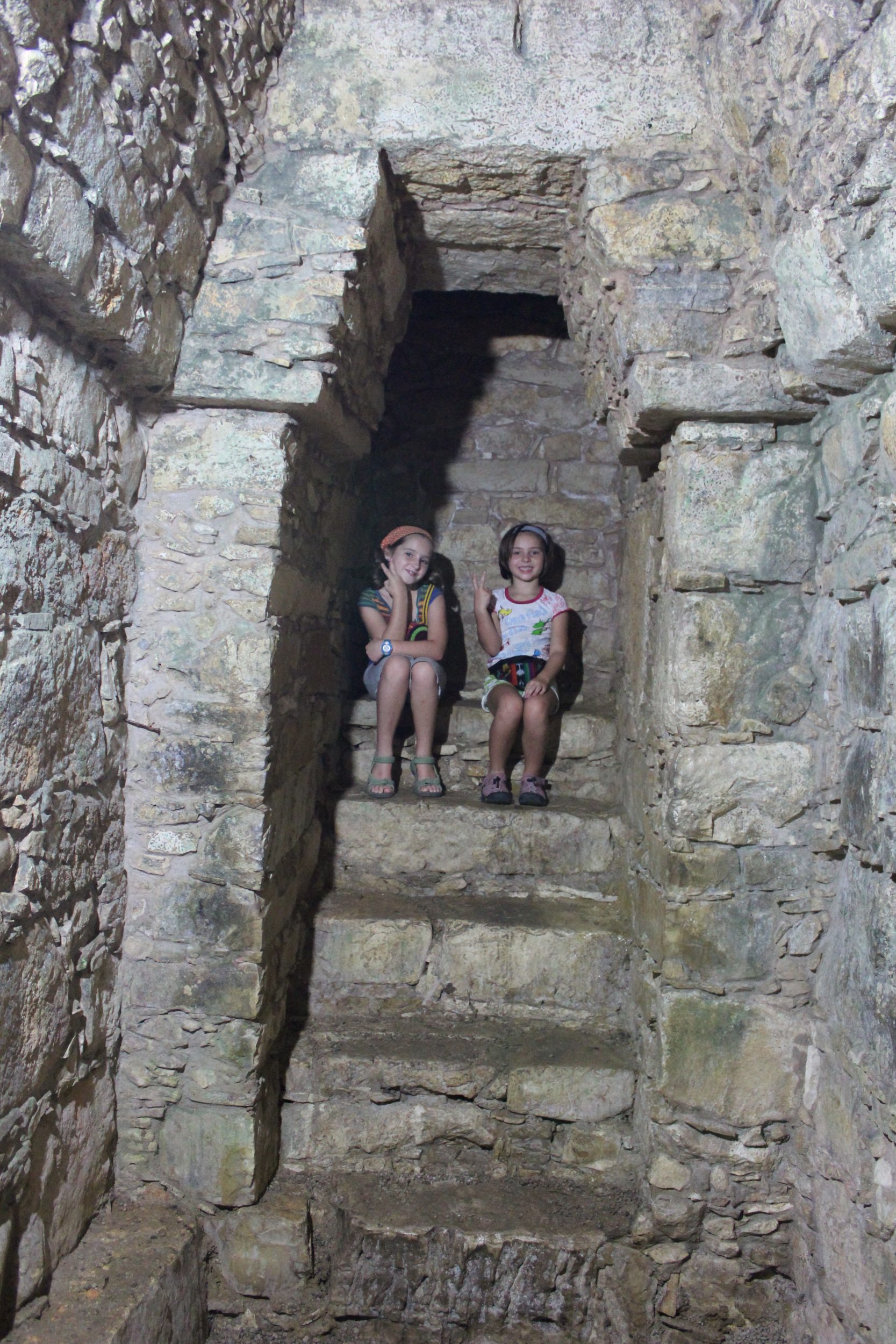 The ruins became a UNESCO World Heritage site in 1987 and is considered one of the most important and most studied Mayan sites. Because there was a recorded history and lots of plaster inscriptions here archeologists were able to build the first time line of rulers of a Mayan city and decipher some of the glyphs, giving them a key useful at other sites. 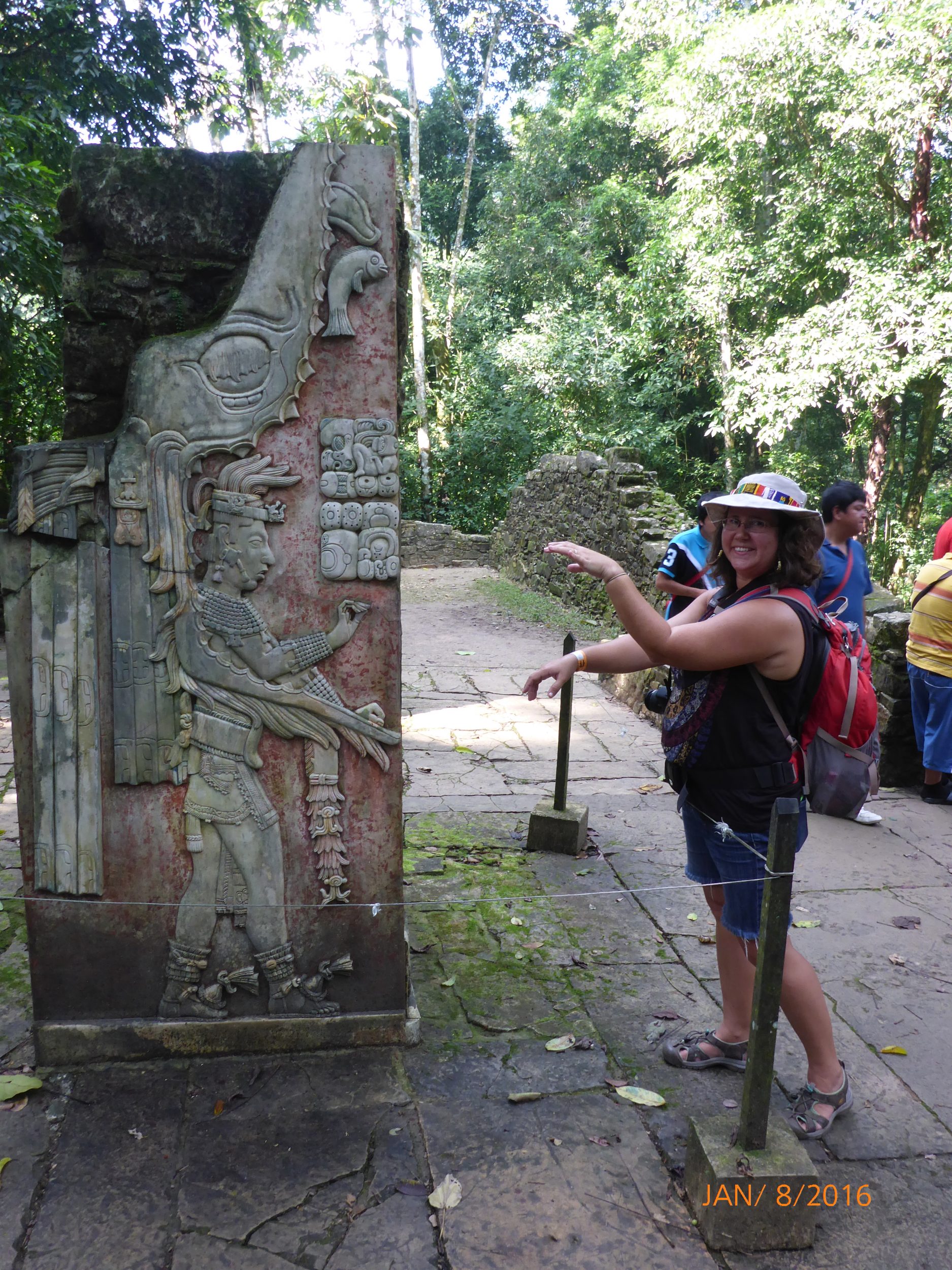 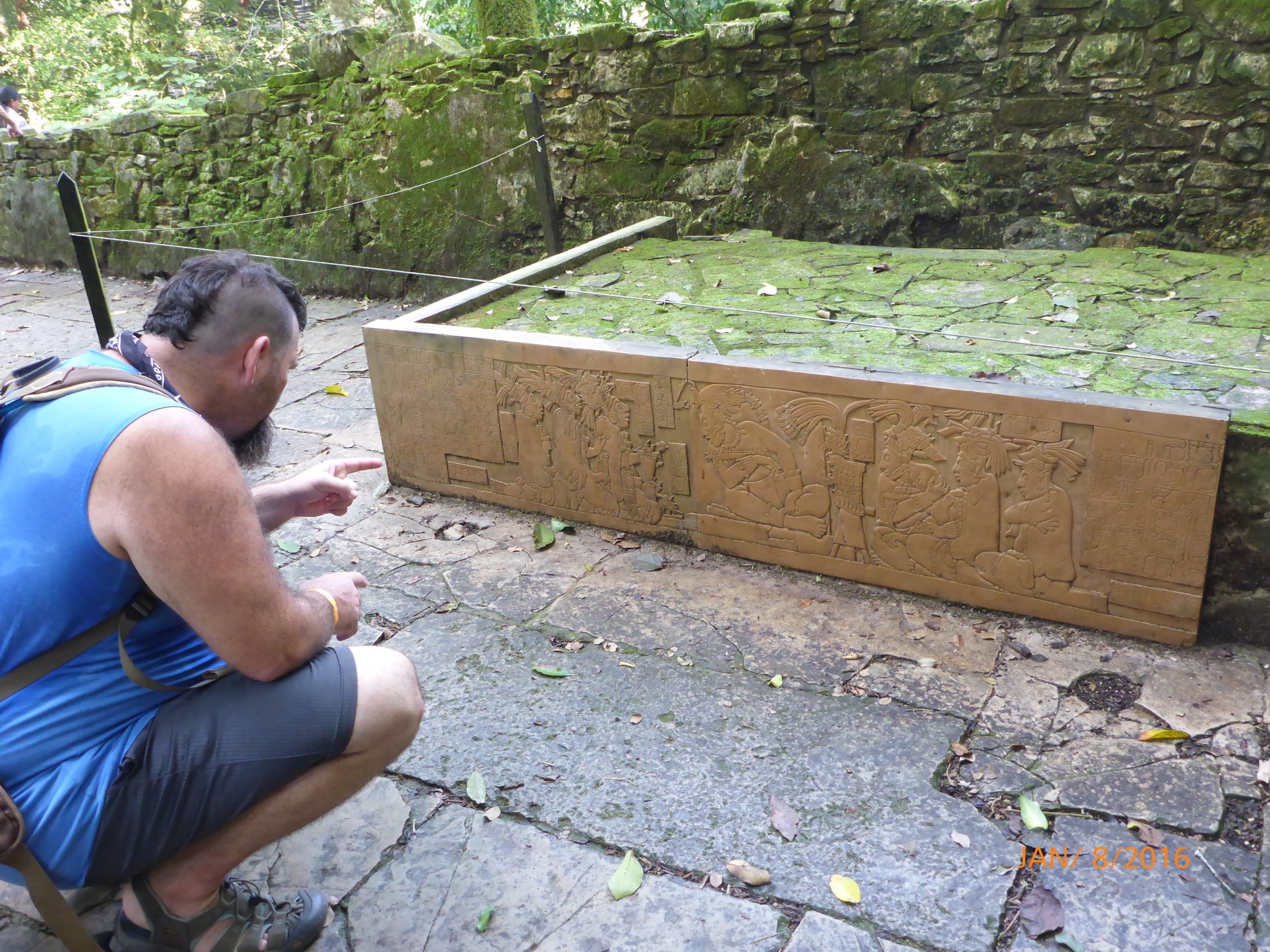 The best known ruler of Palenque is Pakal the Great who took the throne at age 12 and ruled until his death at age 80 in the 7th century. His influence is everywhere in the city, and his gigantic burial tomb was discovered inside the Temple of Inscriptions in 1952. It was too large to remove, but a full size replica is the highlight of the on-site museum. His wife was found in a tomb nearby that was named the Tomb of the Red Queen for its’ striking red color, and visitors can go inside and see it in its’ original resting place.

Dating back as far as AD 200, Palenque was at its height between AD 500 and 700 and its influence extended throughout the basin of the Usumacinta River. It was abandoned in the 9th century when the Mayan civilization collapsed and remained hidden under thick jungle that had covered its’ temples and palaces, largely protecting them from the elements and from looting. The area remained uninhabited from its abandonment until the Spanish arrived in the 16th century Colonial period, extending the protection of the site. 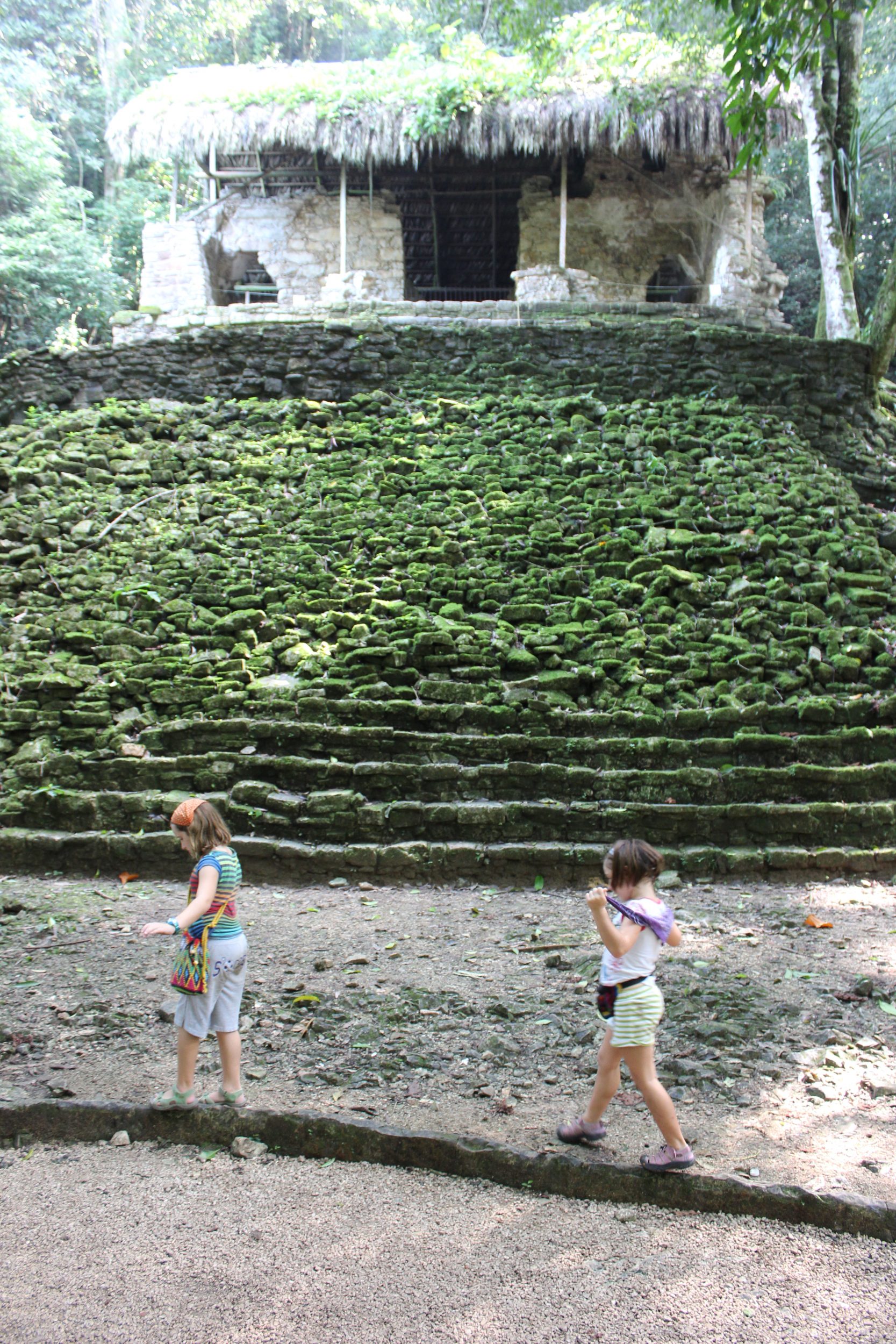 There are bathrooms near the “end” of the trail through the ruins, and then you have a choice: follow exit signs back to the entrance where the vendors are waiting or go behind the bathrooms and follow the trail over the river and through the jungle that comes out near the museum. Take the second option, trust me. The lush green trail and running water are enchanting. There are waterfalls that form natural pools but swimming is no longer allowed. There are ruins here too, Palenque being only about 10% excavated and surrounded by more structures for miles around. 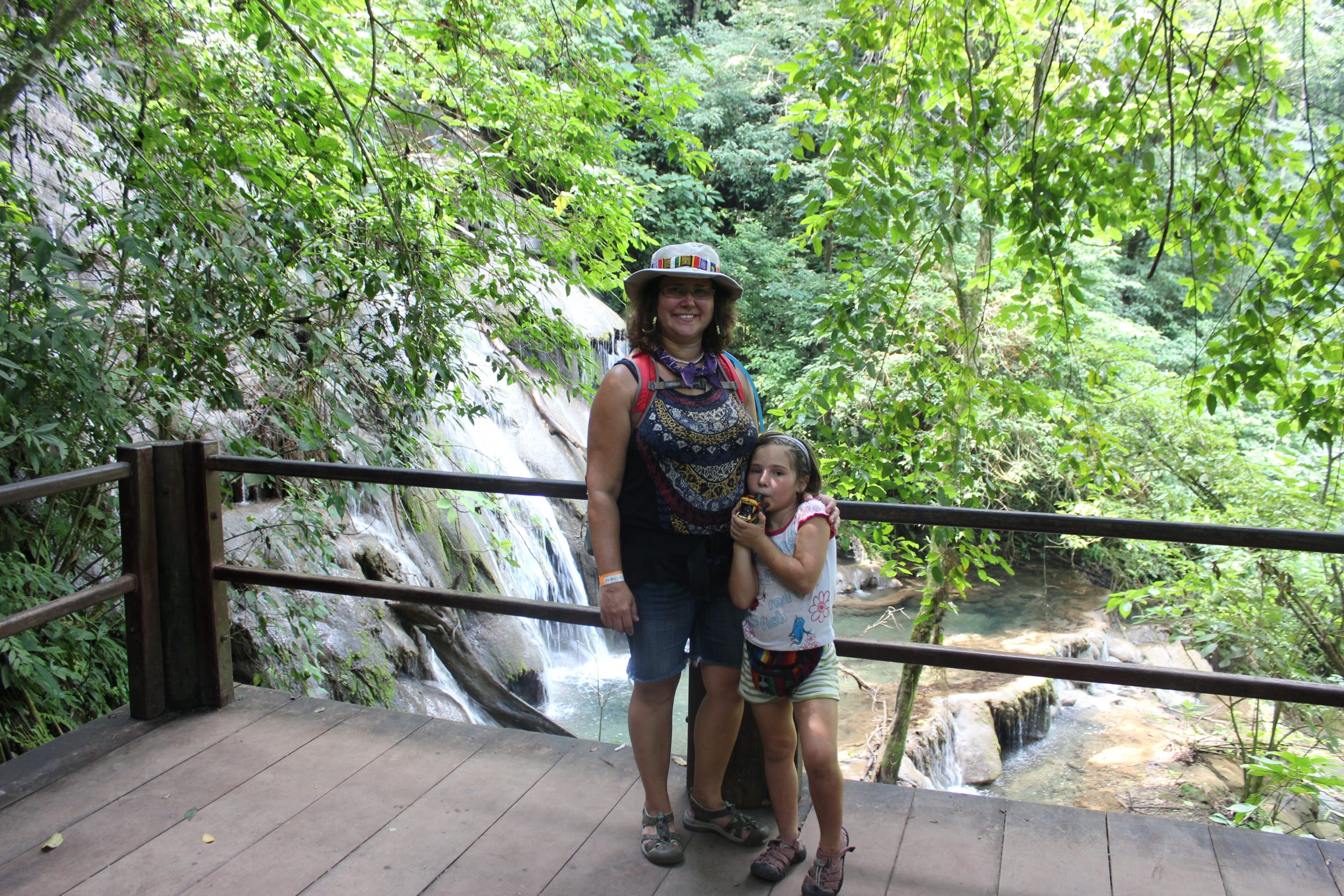 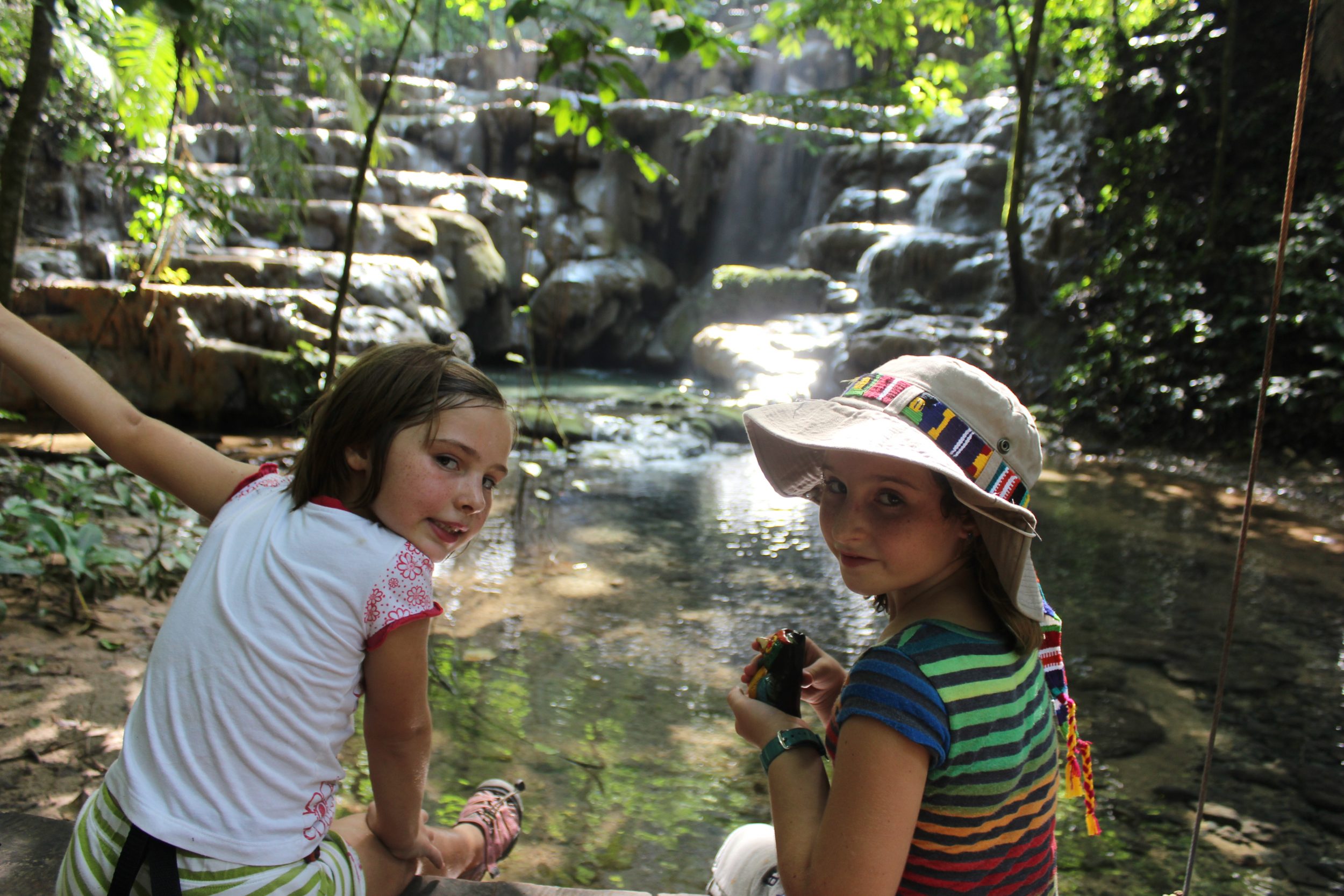 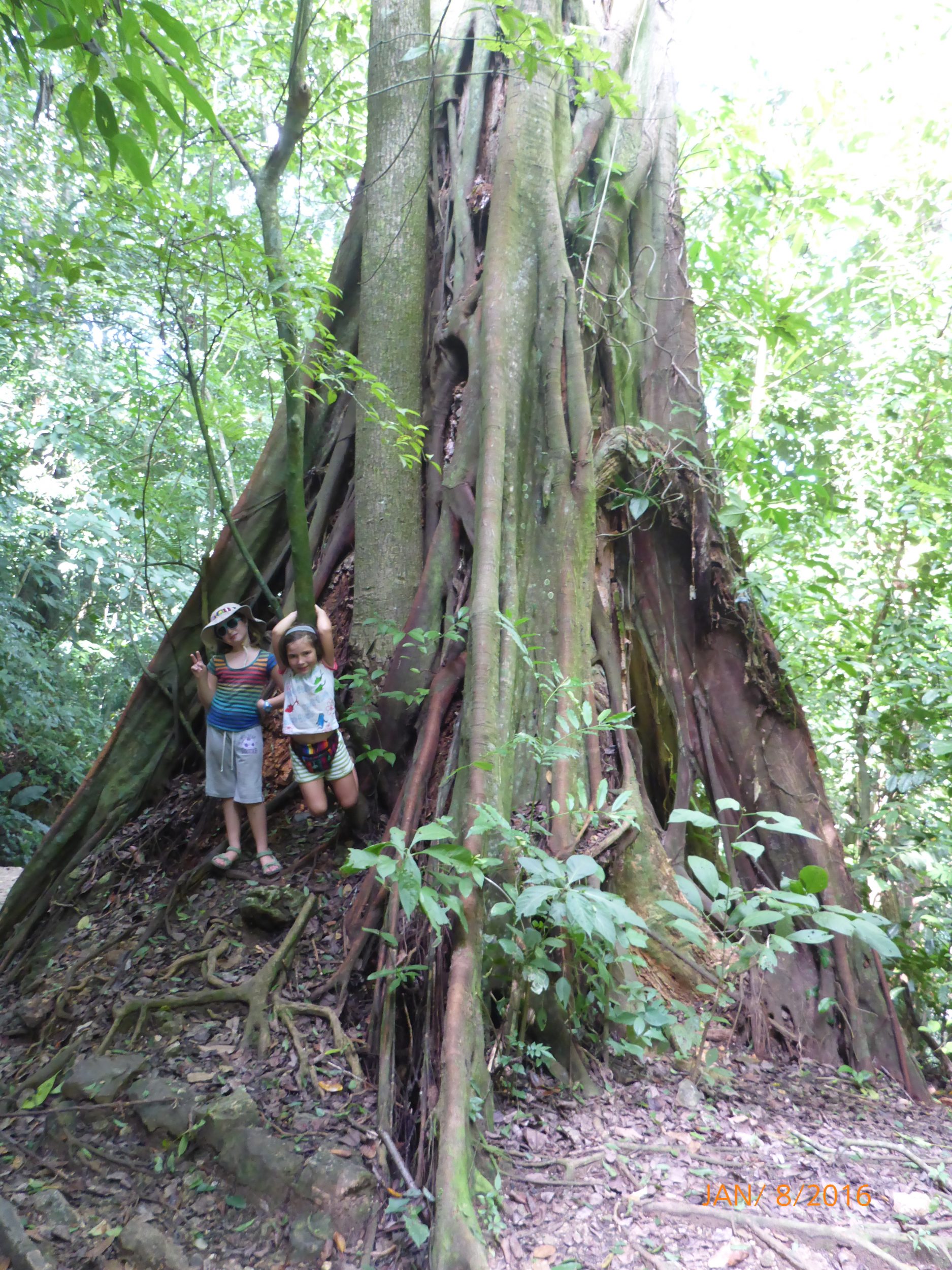 Our guide took us to lunch back in the tourist zone (chicken or fish?) but it was another meal we didn’t have to pay for plus we didn’t pay for the colectivo. There was plenty of food and the area is very pretty.

We walked to the ADO station and booked our return bus tickets for the next day, but the bus was almost full and there weren’t 4 seats together. I didn’t think about the fact that booking things for one person is easy, but to make sure there is room for four we should go earlier. We bought the tickets and hoped that we could talk the other passengers into switching seats instead of having our children sit with strangers, and honestly who wants to sit with someone else’s child?

We tried to walk around town but we were melting, so we went back and swam in the pool at the Hotel Tulija Express, playing Simon Says in the water and cooling off. Despite the restaurant making Jason sick the first day the place grew on us. It’s the first place I’ve seen with a garafon of water available so we could fill our camelbaks, the play area and pool are nice to relax while the kids run around, I loved the orange soap they gave us and Chedraui grocery store is next door.  The only cons were that the staff didn’t speak any English (more our problem than theirs) and we had to ask for extra towels every day because they only gave us two. And don’t eat at the restaurant.

I was excited to take everyone out to the place I had stayed when I had come before, El Panchan. It’s a backpacker haven just outside the entrance to the ruins with cabanas hidden in the trees and good food on site. We would eat dinner at Don Mucho’s and then stay for the fire show later that evening, entertainers swinging flaming objects around their bodies. I was worried the place would fill up so we went early-too early. We sat down at 5pm only to find the live music didn’t start until 8 and the fire show wouldn’t be until 11:00. Uh-oh.

Jason and I got a little bored, but the girls found other kids to play hide and seek with, following the trails through the jungle that led to cabanas and splashing in the creek even after I told them not to. A few hours later after dinner they just couldn’t take much more. We had already had a long day and both girls fell asleep with their heads on the table. 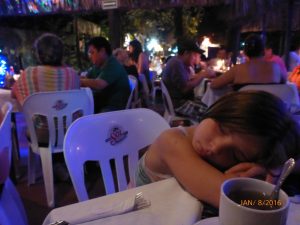 I had told them about the amazing fire show, showed them videos of the people swinging flaming apparatuses around their heads, and I so wanted them to see it in person. When it finally started (late of course: Mexico) we woke them up to watch…and 3 teenagers gave mediocre performances and they were done. It was a huge let down, but the kids were happy to go back to town and crawl into bed. Oh well.