How We Work As Digital Nomads and Always Have Internet 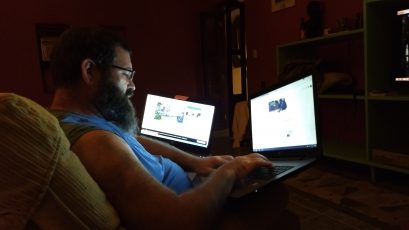 I see questions about internet speed and availability in almost every online group for travelers. We are digital nomads, traveling and working online for 2 years now without having to worry about internet. Want to know the secret? Have a backup plan.

Know what you’re getting into

When we moved to Cozumel, Mexico 2 years ago we knew that internet would be slower than we were used to. Jason works online for a company back in the U.S. and we had gone to a lot of trouble to convince them that he would have no problem doing his job from remote. If the internet at our house wasn’t fast enough or went down it wouldn’t just be an inconvenience, our income would be at stake.

The first house we rented when we arrived had assured us that the internet was good. When we arrived we found it was nonexistent. No service at all, and Jason was supposed to go back to work in a week. Not a good start.

The property manager was puzzled, but not very concerned, and when I asked in the local online forums what to do people advised we “Just relax and enjoy paradise,” or named off a few bars on the tourist strip that had wifi. It wasn’t helpful.

We weren’t on vacation, we were living here and we wouldn’t be able to stay if we couldn’t get online and work.

For Jason work included virtual meetings that couldn’t be done in the midst of cruise ship visitors partying it up at the bar. There weren’t any co-working spaces and we didn’t know the island well enough to find the quieter places that we later used for working outside of the house. It was a tense week with many trips to the TelMex office to complain until service was restored just in time to go back to work.

Being dependent on someone else to provide your internet connection is a mistake if you want to live the digital nomad life.

This is your job, your livelihood, the thing that finances everything else in your life. It’s not something to leave up to chance, so be prepared and have a back-up source of internet that you provide yourself.

We knew we would need to do this before we got to Mexico, but having no internet on arrival lit a fire under us to get a second source going right away. I’ve heard people suggest that if your house has one internet provide you try to connect another in your own name, but then you’re still tied to the house. Digital nomads also tend to move often. There’s a better way.

Our first plan: we bought a usb stick (sometimes called a bang stick which sounds much more fun!) from the Mexican cell phone provider TelCel. To buy the bang stick cost us 1919 pesos, which was around $120 usd at the time. It takes a SIM card just like the ones we use for our phones (also from TelCel,) and to charge it with 3gb of data every month was 400 pesos, around $20-$25 usd per month depending on the exchange rate. It wasn’t super cheap to get started, but on days when the house internet was slow or there was a service outage on the island that bang stick saved Jason’s job, making it well worth the extra cost.

Having an independent source for internet also allowed Jason to work from places outside of the house instead of being stuck inside all day and missing out on family fun. Don’t tell the folks back in the office but we’ve used it on the beach, while visiting other cities, in a moving car, anywhere you get a cell signal you can use it, giving you much more freedom to choose your office space.

At our favorite place on Cozumel, a palapa-covered beachside café called The Bungalow, Jason could work in the restaurant with his toes in the sand and a great view of turquoise water. Instead trying to stay awake by taking a coffee break from a desk in a cubicle, he would take a 15-minute snorkel break with the kids and refresh his brain in the ocean.

The downside was that the bang stick plugs directly into a computer via usb, meaning only one person could use it. Jason’s work is our main income, so he takes priority, and sometimes that was really frustrating for the rest of us.

We needed a better solution.

We attended a talk in Playa del Carmen by Fabian Dittrich, a German traveler who crossed South America in a 1997 Land Rover Defender with two friends. Their business is all done from remote, which meant on that trip their office was the inside of their truck wherever they happened to be, and we learned a lot from him on how to be better digital nomads. Jason spent some time talking to him afterward about how they stayed connected while living in a truck, and our number one take away was the device that they used.

It was a Huawei Mobile Wifi Modem

It wasn’t any more expensive than the usb had been, but it’s different (better) in  three distinct ways.

First, we can connect up to 10 devices to it, so all of our computers, cell phones, and kindles can use it at the same time.

Second, it takes a local SIM card and is able to use a data plan like the usb did, but it can also be connected to the house internet (or café or gas station or wherever you happen to be.) So with one modem we can connect to different sources of internet, no changing networks or typing in passwords on each device.

Bonus number three: it allows you to extend your network. For instance, in our current rental the signal from the house wifi is not very strong upstairs in the TV room, but we can connect the Huawei modem to the house signal, then place the device in an upstairs bedroom and easily access the signal coming from it rather than from the original source.

We like ours specifically because it has an LED display that shows you what network you’re connected to and how strong that connection is (in the case of cellular data, the speed of the network. 4g, 3g, etc.), the name and password of wireless network that the modem has created, and battery life.

When you’re using the SIM card it can tell you how much data you’ve used since the last time it was turned off, so it’s a good idea to leave it on and just plug it if needed. It may not do 4G everywhere but that may not matter depending what you’re doing. We had 4G when we used it in Austin, TX, but right now we have 3G where we are in Mexico. It’s still plenty for us, and it’s almost always faster than the house connection if speed is the main concern.

Having this modem means that both of us can work online with our computers, the kids can be doing homework or playing games on theirs, and all of us are using one connection. When we move to a new rental house Jason can connect the Huawei modem to that network and all of us will instantly be connected without having to enter anything new. If the house connection goes down or gets slow we switch over to the SIM card and keep right on going.

you might notice a few things in the reviews, but I wouldn’t recommend it if it didn’t work for us.

Some people complained that they couldn’t get it to connect. For us, it connected automatically when Jason put the SIM card in and wasn’t a problem. If you have problems connecting you may need to manually enter the APN, something you may have done before if you’ve used SIM cards in an unlocked cell phone. Don’t give up without contacting Huawei for help, or ask in the comments below and I can have my own personal tech guru try to help you (it’s good to be married to an IT guy.)

The other complaint seems to be that the battery life was bad, but we haven’t had problems there either. Like any other device you’re going to have to plug it in sometimes so just keep that in mind. For times when we can’t plug in our small devices I have two portable chargers

You never know what kind of internet service you’ll have at a rental house or on the road. Sure it says it’s provided, but is it fast enough? Is it reliable? Will you be able to get work done, or sit staring desperately at the screen?

Having a reliable backup source of internet has been a job saver at times, and it’s so convenient I recommend it to everyone we meet on the road.

The peace of mind that it provides for those of us who depend on the internet for income is well worth it.

So for all you asking how to work online and travel, this is a big, big part of doing it successfully. Become your own boss means providing your own office supplies, and if you want everything to work reliably that should include making your own internet and taking it with you wherever you go.

Once you get that down, the only real question will be where is your office going to be today?

Full disclosure: I am an Amazon affiliate and when you follow the links in this article I get a small commission from your Amazon purchase. I was not asked to promote this item by the company or paid by anyone other than as stated above.