Getting the 180 Day Stamp-Visa Run Part 8 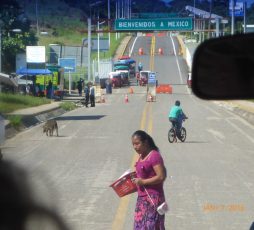 Part 8 of our visa run (start here if you didn’t read the earlier posts.) We spent the last of our Guatemalan currency having breakfast at the Hotel Casa Amelia and were picked up in another smallish tour van for the ride back to Mexico. Even though it was only 8:20 we were the last ones in again, so we sat where we could and settled in for a long ride.

I’ll be honest: this was the least interesting day of the whole trip, as get from here to there days are. We were going through the northern crossing at El Ciebo this time instead of back over the river, apparently a newer way to go that wasn’t used as often. I hoped that didn’t mean there would be problems.

The van was old and run down, and there was no A/C, but with the windows open we all got plenty of wind in our faces. Jason had an interesting conversation with the driver who openly talked about his work with the hacker group Anonymous and his side job smuggling precious stones and other goods across the border. I listened to Percy Jackson audio books with Rory, one ear bud for each of us. June had her headphones all to herself. All the passengers were quiet, some napping to pass the time.

It was 3 hours before we got to the border. The driver directed us to a trailer on the side of the road and said to leave our bags, he’d take them through. I was a little nervous about leaving everything, but really where could he go with it? We got our exit stamps in the immigration office inside the trailer, officially left Guatemala and walked across the border into Mexico. Each traveler stood in line for paperwork to get new visas, and it was the same form you fill out on the airplane when you fly in, easy for us since we had done that many times. A woman behind a desk checked each form against our passports, stamped us, and we were in. Back home in Mexico for another 180 days!

Then we had to find our van and our luggage. We walked through a maze of chain link to get to a building with a nearly empty parking lot. Our bags were waiting to checked over by a couple of ladies wearing gloves, then handed over to us. I saw some of the other travelers from our van and asked if they knew who was picking us up from here, thinking surely our Guatemalan guide couldn’t take us all the way to Palenque. Just then a new van pulled up and came to get us. He tied all our luggage on top while we took turns using the bathroom and we were off again.

This van had less leg room than usual and my seat was stuck leaning slightly forward. We were crammed in like sardines, Jason squeezed in the back this time and both girls with me. It was the most uncomfortable ride we’d had, and we had to endure 3 more hours of driving to get to Palenque. When the driver offered to stop at a road side stand for food we all declined, wanting to get it over with.

The roads were paved the whole way, which was nice after the hours of bumpy mud puddles we had come through to get here two days ago. There was only one point when the road was closed when we had to detour for half an hour on back roads with sugar cane higher than the van on either side of the road. In a bus full of tourists I was very aware of how isolated this area was and how helpless we would be if someone decided to rob us, but nothing happened.

As the scenery began to look familiar I was happy to be back, to have our visas renewed and to be in a part of Mexico I really enjoy. Chiapas is uniquely beautiful and Palenque is one of my favorite places. I was looking forward to showing my family around town and visiting my favorite ruins.

The van dropped us each off at our lodging, one guy staying at El Panchan where I had been the last time I came. We were returned to the Hotel Tulija Express where we were comfortable with everything but the food in the restaurant, which we suspected had been the cause of Jason’s stomach troubles. A quick walk down the street offered a variety of other places to eat, and the pool was a welcome relief after a long day of driving.

We contacted our tour guide from Operadora Turistica Chambajlum using Whatsapp and arranged for a later pickup in the morning, 9:30, since we were the only ones going to the Palenque ruins. I wanted plenty of time so we planned to just have them leave us there and be done, we’d take the colectivo back on our own. It’s nice to have a guide, but there’s nothing like knowing how to get around on my own in Mexico. I felt like I was back on familiar ground, ready to go again in the morning.