Getting Around in Guatemala: Part One 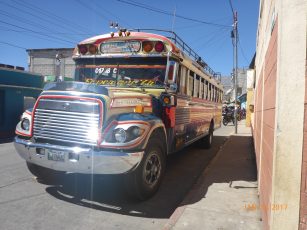 Our family just returned from two weeks in Guatemala and getting from one place to another was sometimes a challenge. The girls loved some of our rides as if they were at a carnival while there were other parts that I dreaded and gritted my teeth through, and a few moments that we thought might require a barf bag.

I’d like to tell you I’m going to give you the easy ways to get around, but sometimes there aren’t any, so I’ll just tell you what we learned and hope that it helps. 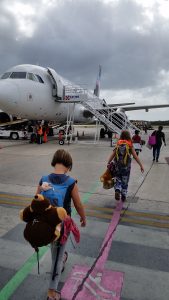 We flew into Guatemala on the Mexican airline Volaris, landing in the capital city of Guatemala City. It’s not a giant airport, but it’s comfortable enough and easy to navigate. As we came in for a landing the girls and I competed for window space to see the view of mountains and a very large volcano.

Once we exited the airport we found a few shuttles waiting but no taxis. I realized I had not done my homework and had no idea what they should cost. (According to wikitravel the minimum fee for taking a taxi to anywhere in the city is 70Q, and you can expect to pay 2-3x more from the airport than you will anywhere else.)

We were hustled to a shuttle by a guy I assumed worked for the airport (ha) and had some confusion – they thought we wanted to go all the way to Quetzaltenango (isn’t that a great name?) I just wanted to go to the bus to Quetzaltenango – but we got it sorted out. However I was suspicious that the price of 250Q (around 33 usd) was grossly overcharging us (and I was right.)

There are several options for getting around by land in Guatemala, with the most famous being the brightly colored chicken buses. There are also the slightly more comfortable and less crowded Pullman buses (think old Greyhound buses) or if you don’t mind paying three times as much you can book a shuttle through most tour companies. We did all three.

Our Spanish school recommended a Pullman bus for the 4 hour ride to Quetzaltenango. We had missed the recommended 3pm bus from Linea Dorada, so I asked our overpaid airport shuttle to take us to Alamo, knowing they had a more erratic but frequent departure schedule. The driver got directions from his boss, then got a little lost and 10 minutes after we left he stopped at a Shell gas station to call and ask again. Google maps said we were only a block away, but we were on the wrong end of the one way street so we offered to walk.

Before he left the driver repeatedly pointed out a blue gate halfway down the block which turned out to have nothing to do with buses, so we walked on. We found a full sized bus crammed into a large driveway further down the street, no terminal in sight. There was a small office behind the running bus where we bought tickets for the 4:00 pm run leaving in 5 minutes. Four tickets at 65Q each for a total of 260 (35 usd.) I told you that airport shuttle was a rip off.

You can put your larger bags underneath the bus, but we travel with only carry on so we stuffed them under the seats. A couple of 20-something American girls sat across from me and put their large backpacks in the empty seats in front of them. This turned out to be very smart, because as the bus wound around tight curves for 3/4 of the trip I had to not only brace my body but keep my bags from sliding across and hitting other people.

There were no seat belts, but the seats leaned back and were comfortable enough. The bus was old and noisy, and the driver was taking the corners hard, making it difficult to relax. Rory managed to nap with me holding her in her seat, but I only closed my eyes to avoid seeing the landscape spinning by. I did take a pill for motion sickness when we set off so I didn’t get sick, but June was pretty queasy by the end.

When we arrived in Quetzaltenango around 8pm it was dark and the bus once again had no terminal. The street that it stopped on seemed to be the normal place as there were a couple of taxis waiting, but they were grabbed by the first people to disembark, leaving the rest of us to walk in the dark.

Overall the Pullman buses in Guatemala make the ADO line we use in Mexico look luxurious, but they aren’t bad.

The common explanation of the term “Chicken Bus” is that you frequently see people bringing livestock on board and often see people with chickens. I think this is wrong.

While riding on the chicken bus in heavy traffic I had multiple heart-stopping stabs of regret while watching our bus veer into the opposite lane and charge at oncoming traffic until the last possible moment. Then the driver would stick the front bumper of the bus into a space between the vehicles on our right and everyone would stop until things progressed enough that he could force our bus back into the correct lane ahead of everyone else. We didn’t carry chickens, we played chicken, and it was while it was terrifying for me none of the local people batted an eye. 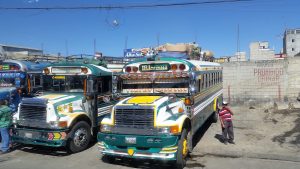 Even knowing ahead of time how scary they can be we felt that we should take a chicken bus at least once, so we went to Minerva terminal in Quetzaltenango in search of one headed to the market at San Francisco el Alto. There are dozens of them, some parked and empty, others lined up waiting to fill, and all of them painted with their own personal touches and names. A few are still recognizable as the yellow school buses they started out as back in the U.S. but most have been customized and decorated like a work of art topped with a crown of shiny chrome. 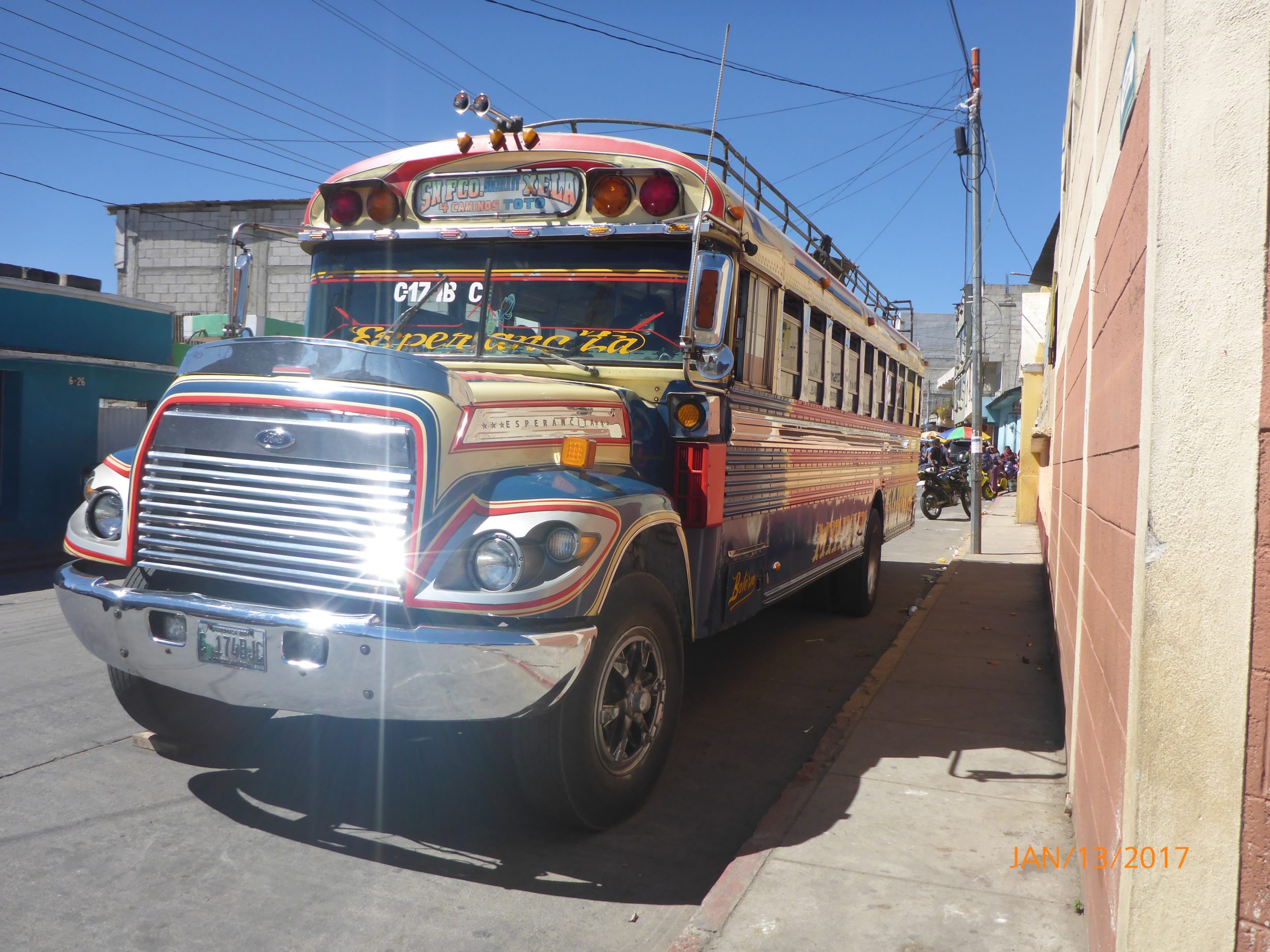 I could have stayed and taken photos all day. A market of goods and food surrounds the area to supply the riders with anything you could want, and vendors are also jumping on and off of the buses, squeezing up and down the center aisle.

Anything that doesn’t fit on your lap can be handed over to the Ayudante, the driver’s helper who hollers out the stops and collects money from passengers. He will climb on top of the bus and tie your stuff down, so I hope the weather is nice on the day you travel.

Once the bus was full enough we started honking at the other buses in line at the crowded terminal until we managed to get out. If you rode the school bus as a child, well, the ride hasn’t gotten any smoother. Everyone bounced around and held onto the bars that are installed on top of the seats as handles. There are also bars on the ceiling for those who end up without a seat.

The drive from Quetzaltenango to Cuatro Caminos, or Four Corners, took half the time my Google map estimated it would, so I was thinking that at least we would save time on the road. Then we sat at Cuatro Caminos for 20 minutes collecting more passengers until there was standing room only. An Evangelical preacher got on with his guitar and stood next to Jason and June shouting in passionate Spanish about God and the Bible, and I hoped he would get off again but he kept it up for the rest of the ride.

The chicken buses don’t have terminals in most places, just an areas where they gather. We were dropped off on a side street near the market we had come to see, and later we flagged down a different bus for the ride back in heavier traffic with more stops to wait for passengers. They do drive faster than other traffic, but the extra waiting around seems to make them slower overall. And scarier.

When we left Quetzaltenango we decided to spend a few days in Antigua before heading back to the airport. The Pullman buses don’t go directly to Antigua, and I didn’t think I could stand 3 hours on a Chicken bus, so we decided to spend the extra money to book a tour company shuttle. This is not a private shuttle, it’s basically a small van that you share with other tourists who are avoiding the buses too.

We booked a shuttle through Adrenalina Tours for $23 usd per person. When I gave the specifics of where we were going they emailed that we each needed to pay $13 usd more because our hotel was 8km up the mountain. I responded that after going 144km for $92 I wasn’t going to pay $52 more to go that last bit and they could refund my money and I’d use someone else. They decided they would take us after all.

The shuttle driver picked us up at 8am as scheduled, then we picked up 2 other girls, so the van had plenty of room. We stopped after an hour for a rare bathroom break that I really appreciated. June and Rory were able to stretch out and nap, and I dozed a little too, trying to avoid being car sick on the curvy roads. The ride was not bad but the switchback roads are hard for me to handle in any vehicle.

When we arrived in Antigua the driver pulled over and opened the side door, indicating that the other two girls could get out there. They pointed out that it wasn’t near their hotel, and after some discussion he said he would take them there for 25Q more per person and they agreed. The service was supposed to be from one hotel to the other, not to the general area, so I’m thinking the driver pocketed that 50Q.

Then he started up the mountain to take us to Hobbitenango. He had been on the phone during the drive and apparently had instructions to take us without arguing. As we got further up the road became smaller, going from 2 paved lanes to a single dusty track next to a steep drop off. The driver went slowly, obviously unsure and uncomfortable, until he backed up from a corner and stopped. He explained in Spanish that there was nowhere to turn around if he went further, but the place was right there and we could easily walk. Looking at my trusty Google map we seemed to be on the wrong road and nowhere near Hobbitenango, but he insisted it was correct and left us there, so we started walking.

Around the corner we found Earth Lodge and were lucky to arrive just as the owner was coming up with some of his relatives. He told us we were not even close to Hobbitenango, that we would have to back track as we were on the wrong road (ha) and then it was much further up the mountain. We were really glad we had bought sim cards for our unlocked phones so we were able to call Hobbitenango and ask them to send someone to rescue us, but it would be awhile before they would come so we settled in next to the local laundry to wait.

This brings us to “Getting Around in Guatemala, Part 2: Short Distances.”