Getting Around Guatemala: Part 2 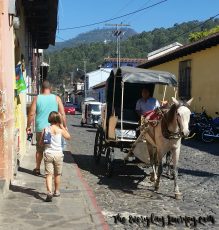 Yesterday I ended Part 1 on a cliffhanger (literally) as our driver dropped us in the wrong place on the side of a mountain in Guatemala. The bright side was that the girls were learning how to wash laundry by hand from a patient local woman.

Today I’ll tell you more stories about how we got around Guatemala when only going short distances, starting with the pickup truck that rescued us.

Travel tip: get an unlocked phone and buy a local sim card. If we hadn’t we would have had no way to contact our destination, Hobbitenango, and ask for help when we were stranded. Hannah spoke English and immediately offered to send their driver to get us, but first she had to find him. He doesn’t carry a cell phone so she had to wait until he was in radio range.

She checked back with us after half an hour, and it was an hour and a half before he could come get us. We were happy we didn’t have to wander the mountain on our own, and the kids jumped at the chance to ride in the back of the pickup with the luggage. Happy ending!

When our bus arrived in Quetzaltenango we were pointed toward a taxi, but there were only 2 taxis for the 20 people disembarking from the bus so most of us wound up walking. It was very cold and wandering around in the dark in a new city isn’t a great idea, so I was waving at every taxi we saw. There just weren’t a whole lot of them.

I spotted a sad-looking station wagon marked as a taxi at a red light and ran up to his empty car. Available! I jumped in the front, Jason and the kids squeezed in the back, and I showed him on Google maps where we needed to go. There are around 50 Spanish schools in Quetzaltenango, and the driver obviously didn’t recognize ours as he studied the map for a few minutes and tried to choose a path.

As we pulled out we cut off another driver and I started to wonder at the state the car was in. It was possibly the oldest and most run down car I have ever been in, seeming to drag along the rough cobbled streets at times. The windshield was more broken than whole, with the cracks all originating from a spot in front of my face that made me wonder what had happened to this previous passenger. My seat could not be adjusted so Jason had his feet crammed sideways in the floor behind me and was suffering quite a bit of pain.  But at least we weren’t so cold anymore.

The streets of central Quetzaltenango are narrow and mostly one way. Each corner is blind, so we slowed at each intersection to check for oncoming traffic. Even when cars were coming we rarely stopped, we just bounced across in front of their headlights.

Confused as to exactly where the school was our driver parked, told us he’d be right back and went looking on foot. Jason was in pain so we all got out. I could see on the map that we were only a couple of blocks away now so we were happy to walk, but first we had to wait for the taxi driver to come back. After a few moments he did, and he had directions for us that matched my map. We paid him 35 Quetzales for his efforts and hiked the rest of the way.

There are nicer taxis in Quetzaltenango, ours was exceptionally shabby, but the driver was nice and worked hard to find the place. If you have a smaller group there are tuk-tuk moto taxis, but we don’t fit in those. While taxis are not overwhelmingly common we saw them regularly, so you shouldn’t have a problem finding one when you need it.

When we were going more than a few blocks we chose to use the public transportation vans called minibuses (in Mexico we call them colectivos.) Each one is slightly different in its seat configuration and availability of space, but the one rule they all have in common with the chicken buses is that they are never full.

We wanted to go to the market at the Minerva terminal, so when a van passed I asked the ayudante hanging out the side “Minerva?” He waved us into his empty van and the girls gleefully sat backward right behind the driver as we bounced through the cobbled streets. After a few more people got off and on the driver asked us,  “Bolivar?” and I said “Minerva?” We went back and forth a few times before he shook his head and they ushered us out, pointing to the next van coming along as the one to go to Minerva. I was glad they didn’t try to charge us for our little joyride, and we hopped on the next van hoping this one would go to Minerva.

Minerva market is the largest market in town, so there are a lot of people going there. At first we had our own seats, then as more people crowded on I had the girls scoot together so they were on one seat.  People were standing crushed together in the side aisle, the girls were complaining a little, and Jason had elbows in his face, but no one seemed to mind the lack of personal space.

When we arrived we paid 1.25Q per person, a total of 5Q (0.67 usd) for the ride across town. Only once did an ayudante try to get us to pay more, saying that at night it was 2Q per person. By then we had been taking minibuses all over town and knew better, so we pointed to the clearly marked sign and refused to pay the extra. He shrugged and went on.

These were June and Rory’s favorite way to get around because they frequently got to sit backward or stand and hold a rail along the ceiling. They would stand by the ayudante as he hung out the open door yelling for more people, and June wanted to know if she could work the job herself. Jason and I could not stand in most vans as there wasn’t enough head room.

The minibuses are easier to find than taxis and cheaper, we just stated our destination before getting on to make sure we took the right one. They are not terribly fast but you do get a driving tour of the city. We were always the only non-locals on the bus and were treated the same as anyone else, no tourist prices. 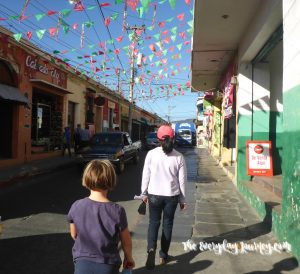 In a new city I think the best way to really see it is to walk around; nothing beats being able to peek in doorways and get up close to the architecture.

We stayed at a Spanish School near the Parque Central, Casa Xelaju, and the school offered a walking tour of the area every Monday that we took part in to learn a little more.

Sidewalks in both Quetzaltenango and Antigua were narrow and traffic is pretty heavy, but it’s also moving slowly most of the time. The altitude made us gasp for air on the slightest incline so I can’t say we walked anywhere fast, but if you aren’t going across town you can get to a lot of places in under 15 minutes.

Plus it’s free and we tend to lose a few pounds when we walk everywhere. 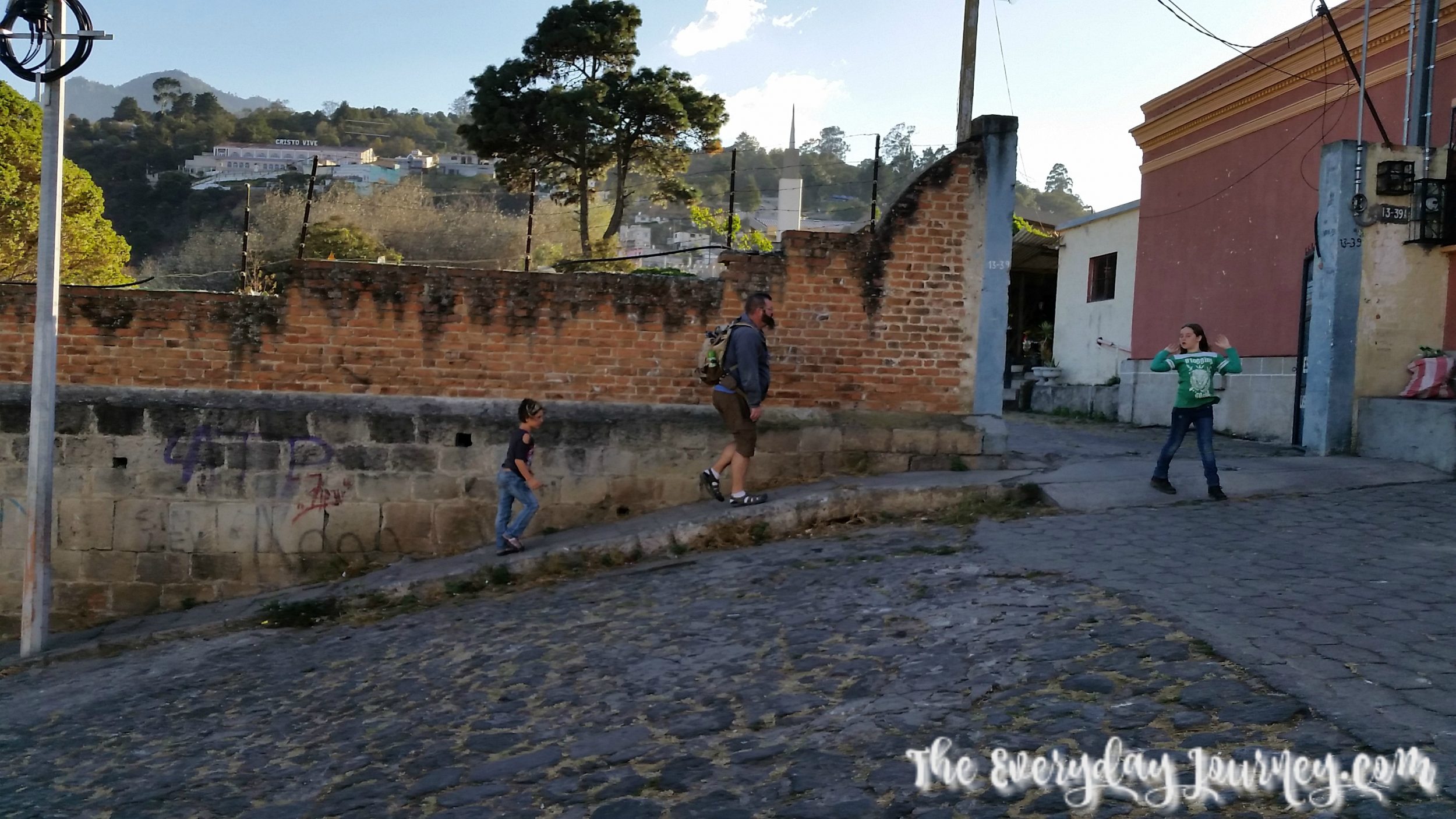 Are there other ways to get around in Guatemala? Of course, I’m just sharing what we did.

So tell me, how do you get around when you travel?