The Disappearance of My Teenage Daughter 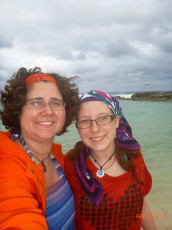 Today is my daughter’s 18th birthday, but we’re not celebrating. There’s no party, no presents, no marking of this milestone that parents look forward to from the time their child is born. My teenage daughter left two weeks ago and hasn’t looked back.

Teenagers often decide that their parents are the root of all their problems, but in my daughter’s case she has an out: her dad (my ex-husband) has been trying to convince her that she’d be better off with him for her whole life. We split up before she was even one year old, and he’s refused to provide any support for her without a court order to force it, but having me to do all the responsible parenting makes it easy for him: he’s the fun parent.

We’ve always been close; I was a single mom for the first part of her life, just her and me. As she became a teenager we were sometimes more like friends, bonding over Grey’s Anatomy and talking about our plans. I looked forward to seeing her become more independent, to seeing her start to contribute instead of being a dependent member of the family, but somehow that never really happened. Instead she lost interest in being a member of our family at all, chafing at simple rules and avoiding her adoring little sisters whenever possible.

I don’t know where I went wrong.

I do know that I made a mistake by arranging our lives around her. We live in this house and in this town because she wanted to go to school here. We drive a car with three rows of seats to give her a comfy place to ride because even after we sent her to driver’s ed and she got her license she didn’t want to drive on her own. She had the nicest bedroom, the newest clothes, an invitation to everything we do as a family. Her rejection stings deeply after putting her needs first for so long, and to see how much I put her before everyone else in the family makes me realize how wrong that was.

Jason and I decided we wanted to live by the ocean when she was about to start high school, and she asked to stay here to finish. We agreed, not thinking about the impact of putting those two stressful life events together. We decided on a destination of Cozumel, Mexico and took the kids down for two weeks of fun and familiarization. She had a great time while we were there, learning to snorkel and adapting quickly. Everything seemed fine.

When her senior year started she felt the pressure to actually follow through on all her big plans. After years of being sure of herself and dedicated to her dream of becoming a pediatric surgeon she seemed to lose her way. On the rare occasion I did get her to talk to me she said she wasn’t ready to grow up, and I told her she didn’t have to, to take her time. The school pushed for everyone to go to college, but I thought a gap year would be a good thing, a break and time to grow up a little before deciding what to do with her life. She resisted making any decisions, and I could see her pulling away from her sisters and from us, gone all the time or hiding out in her room or burying her face in a screen. Despite my worries I chalked it up to stress, normal teenager behavior and a new boyfriend.

The more we focused on the move to Mexico the more distant she became. Over the past six months I noticed changes; she lost interest in speaking Spanish, declared she didn’t like the water and refused to go swimming with us over the summer. She avoided questions, answering everything with a shrug and “I don’t know,” so it took weeks for her to admit she didn’t want to go to Mexico with us. I think that came directly as a result of not wanting to leave the boyfriend, which wasn’t a surprise.

It hurt, and at first I told Jason that I didn’t know if I could go without her. How do you move to another country and leave one of your kids behind? But she is old enough to make her own decisions, and she wouldn’t be totally alone here. I hoped she would change her mind, but I adjusted our plans.

More upsetting was the new idea of moving out when she turned 18 “because she’ll be an adult.” As if a birthday would result in a Disney transformation from child to adult, poof! I hated the idea even more when she said she didn’t want to be on her own, instead she wanted to move in with her dad because he promised more independence so she could practice being a responsible adult. I sat her down and explained that not only would it make it harder for her to finish school, it would break my heart to have her run away the second she was legally able to and be an insult to all the support we’ve given her throughout her life. We had sacrificed a lot for her, and after graduation she could do whatever she wanted, but I wanted this last few months. She said she understood, but for weeks I saw the plans still simmering in the back of her mind with various people stirring the pot.

Every day I waited for the other shoe to drop, for her to pack up and disappear. I was afraid to make any future plans for fear I’d have to cancel when she up and left. Should we plan a birthday party or would she be gone by then? Should we buy Christmas presents or would she be gone by then? Should we look at 2 or 3 bedroom rentals in Mexico in case she came down later? Our house was in a constant state of limbo where she was concerned, and it was taking a toll on all of us. I felt like she was waiting for the holidays to be over so she could collect as many presents as possible, and it made me feel used and angry.

Finally I couldn’t take it anymore, so I called her bluff. I told her that if she was determined to go then just pack up and get it over with, thinking that she wouldn’t waste this last six months with us before we left the country. I was wrong. She told me that I was making her miserable, that she only feels bad when she‘s in our house and the only way to fix it was to leave. I couldn’t help crying as she packed and her boyfriend looked worried as her helped her carry everything out. I asked her repeatedly not to do this, that there was no undoing betrayal of this magnitude, that it was only six months I asking for. I felt like absurdly like a desperate woman begging her abusive lover to stay. She left anyway, stone faced. I haven’t heard from her since and don’t expect to.

So her dad finally got his way. He finally convinced her that I am the root of all her unhappiness and she went to live at his house where there are no rules. I couldn’t help noticing that they timed it so that we’ve already paid for everything-she knows that he refused to pay for so much as a pair of PE shoes her entire life. Even her graduation robe and fees are already taken care of.

Surprisingly there has been only minimal disturbance in our house. She was gone so much already, we didn’t miss her. I knew she was gone, and we sat the little girls down and told them, but they just took it in stride. I hadn’t realized that she had already pulled so far away that we wouldn’t feel her loss. It was strange, but it was a relief. Life goes on.

Today being her birthday makes it hurt more, though. All the expectations, the finish line of raising a child, seeing them become a responsible adult, a functioning member of society; I feel like I ran the marathon but got cut off a few blocks before the finish line. The self-assured confident girl I spent years with disappeared so quickly, replaced by one that was angry and lost. She pushed me away, and I miss being close to her like we were only a year ago.

I wonder if our plan to move to Mexico brought things to a head faster than normal life might have, but I can’t bring myself to be sorry. I can’t live my life for her, and right or wrong I’ve done all I can. I just had no idea that this day would be so sad. Happy Birthday Chenoa.