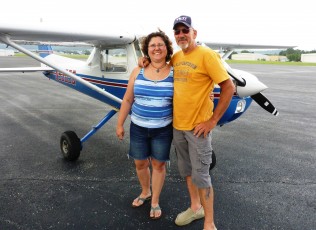 Hey ya’ll! We are in Arkansas visiting my parents and my dad’s side of the family before we move to Mexico (only 9 days!)

When describing my relatives in Arkansas I often tell people this: “You know the guys who step out of the woods wearing overalls and carrying a shotgun and say “Whatchu doin’ here boy?” That is my family.” Really it’s been a few generations since they were like that, but we did have stills up in the hills that needed protecting (yes my family made moonshine,) didn’t believe in doctors and lived off the land. I’m proud of my roots.

I got in touch with my cousin Mike recently on Facebook and saw that he had learned to fly. Thinking my daredevil 8-year old June would like to take a ride I asked how many seats the plane had. Mike sent back “Two, one for you and one for me.” Oh crap. Have I mentioned I’m afraid of heights?

At first I thought no way I would go up in that teeny plane, what Mike calls “a canoe with wings.” Then I thought of all the other crazy things we are doing, and the few things that I have passed on doing that I now regret. How often do you get the chance to ride in a private plane? And I trust the pilot, so….alright, alright, I’m in.

We went out to Mike and his wife Sherry’s house and got reacquainted after not seeing each other for years. We’re the same people, it’s only the outside of us that’s changed. We talked about their Harley Davidson and upcoming trip to Sturgis, learning to fly and filled them in on our travel plans. Over burgers and potato salad time flew by and soon it was time to head to the air field.

In Springdale we got comfortable in the FBO, a kind of private lobby with snacks and bathrooms. We were the only ones there, and it was cool to have a little airport all to ourselves as opposed to the crowded commercial flights I usually take. The kids ate nachos while Mike went down to the hanger and got the plane gassed up and did his pre-flight checks.

There was some argument about who was going first, which I settled by saying it would be me. I wasn’t all that eager, but I figured I would try it out and see how scary it was before sending the girls up. Chenoa and June would be fine, it was Rory I was worried about-she agrees to try things like roller coasters and then screams the whole time while other parents glare at me for “making” her go.

When they plane pulled up it looked even smaller than it had in pictures. I have heard people talk about Cessnas but I’ve never seen one up close. Two narrow seats with just enough room for a bag behind them, a dash full of dials and knobs, it was intimidating, but every Mom knows you can’t show fear in front of your kids.

We took some pictures, then shooed the kids away and I wiggled into the seat and strapped in. The flapping open window whacked me in the elbow so I pulled my arms in close, keeping out of Mike’s way while he did another series of checks using a list. We waved goodbye and the kids cheered as we started up the bumpy runway to get into position.

I had on headphones so I could hear Mike and his conversation with the tower, which had the call sign “Razorback” like the University of Arkansas sports team. He told them we were just going to circle Beaver Lake, then he’d be doing a few touch-and-go’s with the others, “Got some cousins in town for a visit.” I liked how casual it all was.

I grabbed the only thing available to hold onto, the door handle, without being too obvious about my jumpy nerves. I watched him check everything again, being thorough (which I appreciated,) and I knew he wouldn’t take us up if it wasn’t safe, but tell that to my screaming survival instincts.

Down to the end of the runway, a turn and we were lined up. So far this was a lot like commercial flights, I just had a better view. As someone who doesn’t always appreciate the window seat I wasn’t sure that was a good thing.

The tower cleared us to take off and we started forward. It was bumpy, but takeoff has never seemed smooth to me. When we left the ground it felt like we jumped and then just kept going up.

When I do things that scare me there is always a moment of regret, of “OH MY GOD WHAT THE HELL AM I DOING” and take off was probably that moment. We tipped side to side as we climbed, and the smaller the plane the more you feel the movement. This was a very small plane.

I listened to Mike talk to the tower, noticing that he said the engine was running rough on take off and we might need to circle a moment. The tower pointed out a helicopter coming toward us and I could turning to avoid us. “Sorry about that,” said a voice, and I wasn’t sure if it was the other pilot or the tower. 30 seconds in and two slight glitches…but if someone was going to have problems I’d rather it be me in the plane than anyone else in my family, and I trusted Mike to keep me safe.

My anxiety passed quickly. The engine smoothed out and we went on instead of circling. I started to really enjoy the ride and we talked about the different dials and gauges. Just to be prepared I asked what would happen if the engine did give out, and Mike pointed out that he was always looking for a place to land just in case he needed one. He pointed out a few and said it didn’t take nearly as much space to land as it did to take off. “We could set down right next to those cows over there.” Wouldn’t that be a surprise for them!

Mike flew gently, make gradual turns and I was really enjoying the view. We were only about 2000 feet off the ground, looking down at the lake. He pointed out the house of the man who sold him the plane and we circled for a moment in a salute. Then we circled the other way and I found myself leaning against my door looking straight down…my stomach did a flip-flop.

When we straightened up again Mike tried to teach me to drive. He ran the pedals and had me take the steering wheel (is it a steering wheel in a plane?) I hated it. For some reason I wasn’t afraid when he was flying, but when I was flying every movement of the aircraft felt huge and on the edge of control. We just went basically straight, I pushed in when the nose went up too much and pulled back to keep it from going down, but flying a Cessna is not my thing.

Turning back toward the airport we could see pockets of rain here and there. The tower advised us that the wind was picking up and a little storm cloud was headed for the runway. If we needed to we could go past and wait for it to pass, but Mike decided that we could beat it.

Coming in we were racing the rain. The little plane bounced and tipped side to side in the gusts. Mike told me if it wasn’t safe he would hit the gas and we’d go back up, but despite the bumpy approach I wasn’t worried. I told him “If you’re not scared, I’m not scared.”

We got lower and lower, and the plane turned a little side to side and we came down. It seemed to be a matter of timing to set down while it was straight, and Mike had it. We touched down easily and drove back to the rest of the family waiting at the FBO. I couldn’t stop smiling, it was so much fun.

We waited a few minutes while the little bit of rain passed and the wind died back down. June got the next turn and a rainbow shown over the plane, which seemed like good luck. Rory had been afraid, but she stomped around impatiently and was so wound up and ready to go when her turn came that she forgot to be scared and had a great time. Chenoa got to talk to the tower at the end of her ride and get clearance for landing.

By the time Jason got his turn it was approaching dark. Two grown men crammed into the narrow seats was cozy….Mike joked that when you’re this close to someone you’re supposed to get married. I talked with Sherry on the ground, and the boys were gone a long time. I wondered how we would know if something went wrong.

Finally we saw a tiny plane land in the dark. It drove down to the hanger area and disappeared, so we walked over and met them halfway. It turned out Mike had taken Jason over nearby Fayetteville to see the Razorback stadium all lit up, but they had run the gas low. Rather than take a chance they had landed and put in more gas before coming back. Jason flew all the way back from Fayetteville and loved it, so when we decide to try flying ourselves we know who the pilot will be.

We all had a great time, and it seemed to really please Mike and Sherry. I know how fun it is to share what you love with others, how great it is when they like it too. He laughed and said that I had the bumpiest ride, and I felt that was how it should be. That’s why I go first, to lead the way and work out the kinks, and I don’t mind. That’s part of why I keep this blog of our travels.

It was great to get to know my cousins again, and great to see that they are having their own adventures. Mike is a scuba diver and they have been to Cozumel, so I’m expecting they’ll come visit us. Thanks for a great time, and we’ll return the favor soon!