The High Personal Cost of Traveling 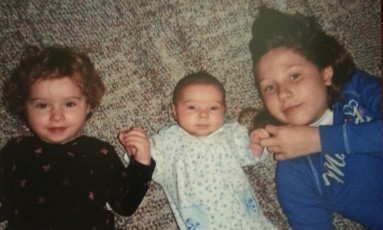 After almost 3 months my little girls have started to miss their disappeared sister.

When we first told them she had moved out I was shocked by their nonchalant reaction. June said she was hungry, Rory agreed. Jason and I asked if they had any questions and June said, “Well, she really wasn’t here much anyway.” And that was it, until recently.

I’ve noticed a change in 7-year-old June. She hasn’t said anything, but she’s more unsure, quieter and clingier and a little sad. I wonder what she thinks about what’s happened to her family, if she wonders who will be next to disappear. She puts on a brave front, and I spend more time with her and give her more hugs.

Rory is more transparent, wearing her heart on her sleeve and saying whatever is on her mind. Last week said she missed Chenoa coming to the chiropractor with us, and does she even go to the chiropractor anymore? I said I missed her too, and that I didn’t know. She called on Rory’s 6th birthday and talked to each of the girls for a few minutes, and they seemed pretty cheerful chatting away on the phone.

Then Chenoa sent me a text that she was going to be in a speech performance at school that night, if we’d like to come. Could this be a breakthrough? Normally Jason and I really don’t like going to those drama things, and it was the only night we could shop for a birthday gift for a party Rory was going to, and June had homework and spelling words…but if Chenoa was finally reaching out to us, how could we not go?

We couldn’t stay for the whole 3 hours, but Chenoa was in one of the early skits. Rory waved frantically the whole time she was on stage, and when she came down they went and sat with her for a little while even though they weren’t supposed to be in the middle of the high school kids. The time came that we needed to leave and I called them back. I don’t know if Chenoa only wanted to see them, or didn’t know what to say, but she kept her distance, speaking only to them. Not a breakthrough after all.

They cried all the way home in the car, wanting to stay with her longer, and I wondered desperately if it might be better just to not see her anymore, to stop having her leave again and again. They cry, but I can’t cry because I have to comfort them and tell them it’s alright when we all know it’s not. It was so hard to hear them complain about leaving when I wanted to tell them “At least she talks to you. She doesn’t say anything to me.” My heart breaks again and again and again, and even worse, theirs do too.

I miss her every day, and I don’t sleep much.

I think a lot about what it will mean when we move to Mexico in July, how final it is, how far away.

I had always assumed that Chenoa would go with us. I mean, who wouldn’t jump at the chance to travel for a year for free, to put off growing up a little longer? Sure there are lots of boring people who never get a passport, but that’s not us, we’re adventurers! And Chenoa and I, we were the Gilmore Girls, buddies who tell each other everything and do our own thing, society be damned. At least, we were, up until about a year ago.

I never realized before how much the changes one person makes in their life affect others, how hard it is to understand when things spiral out of your control inside your own happy little family.

My little sister is 7 years younger than me, and after I had Chenoa I lived with my parents off and on until I met Jason when she was 5 years old. I was 20 when she was born, making my sister 13, and the two of them were children together in my parent’s house until one day I took her and left. I never thought about how that felt for my sister until now.

When Chenoa was little she climbed on my sister’s head to wake her up, squished in next to her to watch TV and loved her unconditionally. After I moved out we visited but we had our own lives. My sister grew up, and she’s done some traveling of her own for the last 7 years and only recently come back to Iowa. It’s been hard to get to know her again, and she talked about wanting to reconnect with Chenoa, remembering the cuddly child, but Chenoa doesn’t have many memories of her. They’ve been separated for so many years now, it’s faded from the little girl mind and the bond seems to have dissolved with the memory.

And that led to a terrible thought. Rory just turned 6, she’s still very little, and her – memory won’t hold onto much from these early years of her life. We’re going to move away, and for Rory her oldest sister will fade away, becoming just stories about someone she used to know when she was little. She’s going to lose the most by having Chenoa gone. As time passes she will lose her completely. This bothers me more than anything else and I want to tell Chenoa, to shout at her not to waste the precious time she has left with Rory and June, with all of us, but if I say anything it just comes off as manipulation and guilt.

Travel has many gifts and advantages, but it also has some steep costs. Every traveler has to take that into account at some point. We sacrifice our connections here in exchange for our own family bonding and world views that are life changing, and I think it’s worth it, but that’s just my opinion, and it doesn’t seem to be one that Chenoa shared. I worried a little about being so far away from family, but most of them don’t see us except on holidays and there will be visits and skyping and letters, so I feel like we will be okay.

Thinking of Rory I realize now that the biggest cost is not going to be mine, and there’s not much I can do about it, even if we stayed.