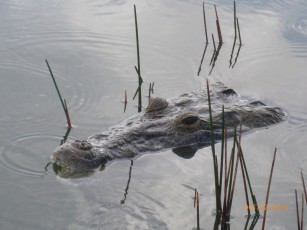 So when we moved to Cozumel I was under the impression that there were only crocodiles way down south in Punta Sur, the eco-park on the south end of the island. It seems that I was wrong.

We first realized this when we drove past warning signs just a few kilometers north of town (and our house!) Then a bar tender told Jason about the lobster place across from our snorkel spot that feeds the crocodiles out back in the mangroves. And apparently there’s a big one that lives under the main ferry pier, and a few in the marinas. Other expats said they’d been warned not to walk around in deep flood water after it rains because the crocs like to come out and move from one place to another in it, and to stay out of brushy areas if there’s any water. Crocodiles stories are everywhere here.

So why am I not worried? Because there is something missing from all the stories: no one gets attacked. No pets snatched, no close calls, and no one eaten. I have yet to hear a single truly scary story, and we did know that crocodiles are native to this area of Mexico, so it seems the only surprise is that they are more abundant than we knew. We loved seeing them up close in Crococun a few years ago, handling them and learning about them.

While on the mainland with my girls this week I found myself wondering if maybe we ought to be more scared as we watched a crocodile approach us from a dock that was less than a foot above the water. 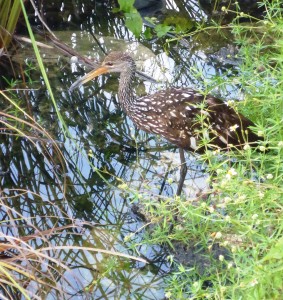 We went on a family retreat last week, and after lunch one day I took all the girls across the street where there was a lagoon with a boardwalk where they could stretch their legs. We looked for crocodiles among the reeds and water lilies but found mostly trash, disappointing all of us. There were a few fish and a long-legged bird that crouched down, trying to hide from it’s eager admirers.

Further down the boardwalk we came to a dock with a sign over the top:

Maybe this guy knew where the crocodiles were? He said he did…for 20 pesos per person. The kids piled eagerly down the dock and I got out the money to pay for everyone, but put it discretely back in my pocket when I realized there were no crocs here either. The water was shallow and clear enough to see the bottom a few feet down.

The man walked out with us and agreed that there were no crocodiles. We watched the little swimmers that we could see flitting around in groups and the girls argued if they were tadpoles or fish. I wondered how this was a viable business if the crocs didn’t cooperate, because I couldn’t imagine they would. Then the man passed me with a bag in his hand and threw something into the water.

It was pieces of chicken about the size of a small fist. Bait. I immediately felt like this was a bad idea. If you feed predators they learn that people are a food source and will come whenever they see them. Bears that become too aggressive in Yellowstone or alligators approach boats in  Florida; these crocodiles will learn that people mean food and approach not only this guy with his bag of chicken but anyone else they see near the water and eventually someone will get hurt.

The girls were fascinated. The small fish started picking at the floating chunks of meat, reminding me of the videos we watched in health class about the birds and the bees (lots of tiny swimmers surrounding a large round object, you know?) There were still no crocodiles though.

The man washed his hands in the water beside the dock, reaching it easily from where we were standing and splashing noisily. I remembered when we had gone to Punta Sur. The only crocodile we’d seen that day was right under the boardwalk we had been walking on and we never would have noticed it if a staff member hadn’t pointed it out. I wondered if there might be a croc lounging in the shade under our feet, and I hoped this guy knew what he was doing. He kept sticking his hand in the water and splashing around to let any nearby crocs know it was time to eat. The girls wavered between fear for his safety and excitement that something might happen.

June and Rory weren’t afraid but one of the other girls was getting cold feet and wanted to get off the dock. I hugged her and told her she was safe. That was when the crocodile started to come to us. The man pointed him out, and at first I didn’t see him, but then I spotted the V-shaped wake of something swimming through the reeds in our direction.

Everyone got excited, and I shushed them thinking that if we were too loud it wouldn’t come. I didn’t know how used to people it was, and I did want to see it. They are magnificent animals, and it looked like it was just a small one.

As it got closer I realized it was more medium sized, and I noticed how close to the water we were. The girls were so excited they were on the edge of the boards and I ordered them back a few feet. I don’t know what size of prey medium crocs eat but I didn’t want it to get any ideas about trying out a skinny 8-year-old.

It swam right up and started snapping the pieces of chicken out of the water one by one, at times maybe 10 feet away. We could see every tooth in its mouth, how it swam by gently waving its long tail back and forth. What was most impressive was its speed, the sudden movement that created a splash as the bait vanished. My heart pounding, it suddenly seemed like a very bad idea to have children so close to this thing. What would I tell the other moms if one of their kids got eaten?

After the last piece of chicken was eaten the crocodile considered us for a moment, then swam past the end of the dock and continued down the lagoon. I breathed a sigh of relief, and the girls ran back to the road to go tell their mothers about it. I hoped none of them would be mad (they weren’t.)

Part of this retreat’s theme was facing your fears, but sometimes our fears are for good reason. Would I go see crocodiles up close again? Yeah, I would. I have a healthy respect for wild things, but I’m also fascinated by them. Would I take small children again? I would take my own, but I’d rather not be responsible for other kids when faced with a predator just a few feet away.

If you’re wondering why I didn’t say anything to the guy about feeding the crocodiles being a bad thing, that’s part of being in another culture. He lives here, and he probably has a family to feed. The only things nearby were tourist attractions and a town that was just a few streets, not a lot of jobs or options. Unless I have an alternative to offer I’m not going to criticize how he has chosen to make a living.

Would you take your kids to see crocodiles up close?