A Harsh Lesson From the Sun 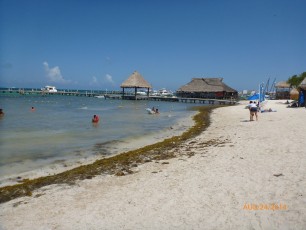 My family is a dermatologist’s nightmare. If we ever went to a dermatologist. When Jason and I met he said I was the only girl he knew who washed her face with bar soap, and I didn’t start using moisturizer until I noticed visible wrinkles in the dry skin around my eyes. I think I was 32-what can I say, I’m a minimalist.

Rory tears her skin up scratching every spot to the point that I am constantly fighting to heal her open sores before they get infected. Warding off new bug bites that she’ll scratch open motivates us to put on bug spray more than any worries about Dengue or Chikungunya.

Worst off all, we are lazy about using sunscreen. Most sunscreen is full of chemicals that pollute the ocean and damage the reefs, and living in Cozumel (or anywhere else) I feel like that’s something we should be concerned with. You would think there would be reef friendly options in the stores but I sure haven’t found them. I also think sunscreen is overused. The rampant Vitamin D deficiency epidemic says to me, hey, just go out in the sun people! It’s good for you…in moderation. Letting our bodies tan creates a natural barrier through pigmentation, but sometimes it’s not enough.

My lack of concern about sun damage comes in part from not having a problem with it myself. I have dark skin and tan easily, almost never burning. I used to laugh at people who got sunburns, not understanding their pain until a trip to Costa Rica resulted in blisters that kept me awake for two days.

Rory was dark skinned at birth, obviously inheriting my olive complexion. In the summer she looks like the Coppertone baby with a shockingly white booty while the rest of her is nut brown. Her desire to be tan all over led to a discussion last week about nude beaches, and she’s all for the idea so she can be tan all over instead of having silly white patches (sorry Grandma.)

Jason’s side of the family is Irish so while he does tan some he also burns. Plus he sprouts freckles upon freckles until they all run together, and I think that counts. While she tans evenly June seems to be more like her dad’s side of the family, prone to burn and damage. We learned just how sensitive she was over the weekend.

Jason took the girls out to a beach club after lunch on Sunday. They found some friends and wound up staying all afternoon, about 5 hours total. We haven’t been using sunscreen much since school took over our lives but we also haven’t been out in the middle of the day or for long hours. We’re tan enough that we can withstand the sun in smaller doses without burning, so Jason didn’t think about sunscreen. A friend put some on the girls when she did her own daughter, but that was it.

When they came home Jason and Rory were both visibly red, but June looked okay. You skin keeps changing for hours after you get out of the sun, though, and her burn was still processing. I put after sun lotion on everyone but thought June must have gotten lucky.

On Monday both girls missed school. Their sunburn was bad enough that they felt sick, headachy and hot to the touch. They spent the day resting, hydrating and being slathered with more aloe lotion.

On Tuesday Rory went back to school, but June still felt bad. Lotion wasn’t helping, we tried store bought aloe gel with 1% lidocaine but it just made her cold and sticky (I’ve always found that stuff worthless.) June is my drama queen child, making a big deal about everything, so it’s hard to tell when she’s really hurt but we gave her the benefit of the doubt and kept her home a second day.

It got worse in the evening, and she was crying and miserable before bedtime. Her pain changed from all over tenderness when touched to stabbing electric zings in her skin when nothing was near her. With a sinking feeling I realized that this meant the burn had gone deep enough it had damaged surface nerves, which were firing shots of pain on their own now. This was bad, and there wasn’t much I could do about it. Nerves just take time to heal.

We needed something stronger, so I sent Jason to the pharmacy. Meanwhile I raided the neighbor’s aloe plants. I split them open, put the first few pieces on her back and she screamed like I was killing her. I figured the police would be showing up at any minute to see who was being murdered in here, so I took the aloe leaves away but the goo was harder to get off. We had to get back in the shower and even the cool water hurt. I searched the internet for ideas; oatmeal, black tea, aloe (cross that one off) but June didn’t want to try anything else.

I was so glad Jason came back with 10% Lidocaine spray, my favorite thing for topical pain of all kinds. It doesn’t heal but it numbs the pain and stops the misery. After a brief wresting match trying to convince her that it would help Jason held her and I sprayed her back-twice-soaking her skin. She was still cautious, but she was able to lie down and sleep. Relief for us all.

Today she went back to school. I had to fight the urge to have her smuggle in the lidocaine, but how would she put it on her own back? Would the nurse cooperate if I sent it along? Probably not. She seemed much better, so I tried to adopt a she’s-not-worried-so-I’m-not-worried attitude. I knew she’d probably have some nerve pain for days, if not weeks, but she had to go back to school.

She made it through the day and hasn’t even needed any pain killers. She’s sitting on the couch now, resting in the a/c and seems fine. We’ll see how she does tonight since it seems to be worse at bedtime (isn’t everything?)

Life in Mexico isn’t always fun; it’s still life after all. I knew we’d have some mishaps here, although for some reason I’ve been most worried about stepping on sea urchins, and Jason feels bad but it’s not his fault, we just got a little lazy. Maybe that’s a good sign that we’re settled in, that we don’t think like newbies who aren’t used to things…still, we’ll be more careful. A sunburn is not so bad, at least we know how to deal with that but we’ll be quicker to apply sunscreen from now on, especially for June.

Share your best tips with us: What do you do to protect from the sun? How about after a burn?