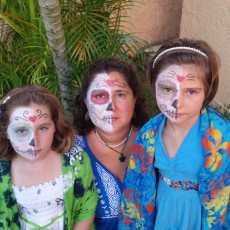 The girls and I have read about Dia de los Muertos and now that we are in Mexico it was something I have really looked forward to taking part in. It is not “Mexican Halloween” but has a rich history of its own in Mexican culture.

Dia de los Muertos, or Day of the Dead originated in ancient cultures such as the Aztecs. Their belief was that life and death was a repeating cycle, not something to fear as we do in Western societies. Death was simply a continuance of life on a different  plane of existence. Once a year during the harvests the Aztecs celebrated their dead ancestors and honored the goddess Mictecacihuatl, Queen of the Underworld. They believed that the dead preferred to be celebrated rather than mourned.

When the Spanish conquered these native populations they tried to force them to convert to Catholicism, but as is often the case what happened over time is more of a compromise between old beliefs and new ones. The Spanish shortened the month-long Aztec holiday to coincide with the Catholic holidays of All Saint’s day on Nov 1 and All Souls Day on Nov 2. The first day it is believed that the gates of heaven open and children who have been lost are allowed to come back to visit. On the second day adults who have died are allowed to come back, and families celebrate and visit with them at their gravesites.

The goddess figure has transformed into “Catrina” is a lanky skeletal figure of a woman in elegant clothing that personifies the fact that even the rich cannot avoid death. She has become a popular figure and can be found year round in many places.

At school June and Rory had altars in their classrooms that they contributed to, and the school sent home this explanation of the holiday:

“During the Day of the Dead families often take the opportunity to visit the gravesite and pull weeds, clean any debris and decorate the graves of loved ones. Often candles, flowers, and the favorite foods of the deceased are placed on the grave and the family visits, eats, sings and tells favorite stories about those who have passed.

Many families set up altars in their homes and often communities host a variety of events.

Food placed on the altar consists of the loved ones favorite dishes and treats. Drinks should be places in the altar to quench the thirst of the dead after their long journey back home. Salt is considered the spice of life and is one of the staples that are often left at the altar. The scents of marigolds as well as burning copal (a resin of the copal tree) are thought to be most beloved by the spirits of the dead and invite them back home.

The rituals used to celebrate the day are varied and colorful. Yet all carry the same message, celebrating the “Day of the Dead” is a true celebration of life.”

My first glimpse of the holiday was as I came back from the U.S. through Playa del Carmen. In the ADO bus station there was an altar that included Mother Teresa and Robin Williams that I found touching.

In Parque de Benito Juarez in the center of the tourist area there were altars and fake cemeteries set up, but they felt more like displays than anything with authentic meaning. They were interesting, but I wondered if they were there to distract tourists and keep them away from the more personal home and cemetery displays.

After dark there were children dancing traditional dances with beautifully painted faces. Dia de los Muertos themed art was displayed for sale along the sidewalks. 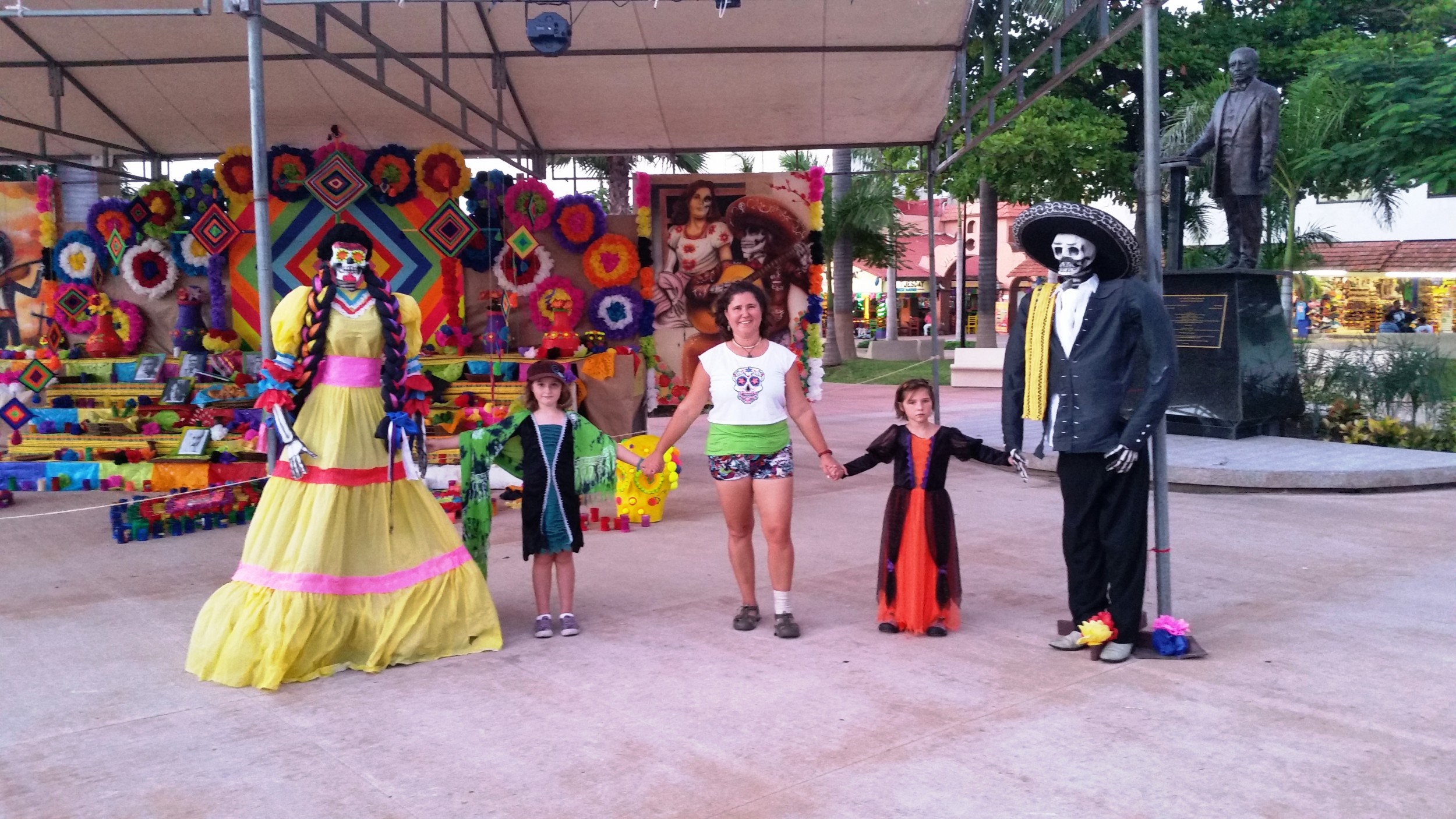 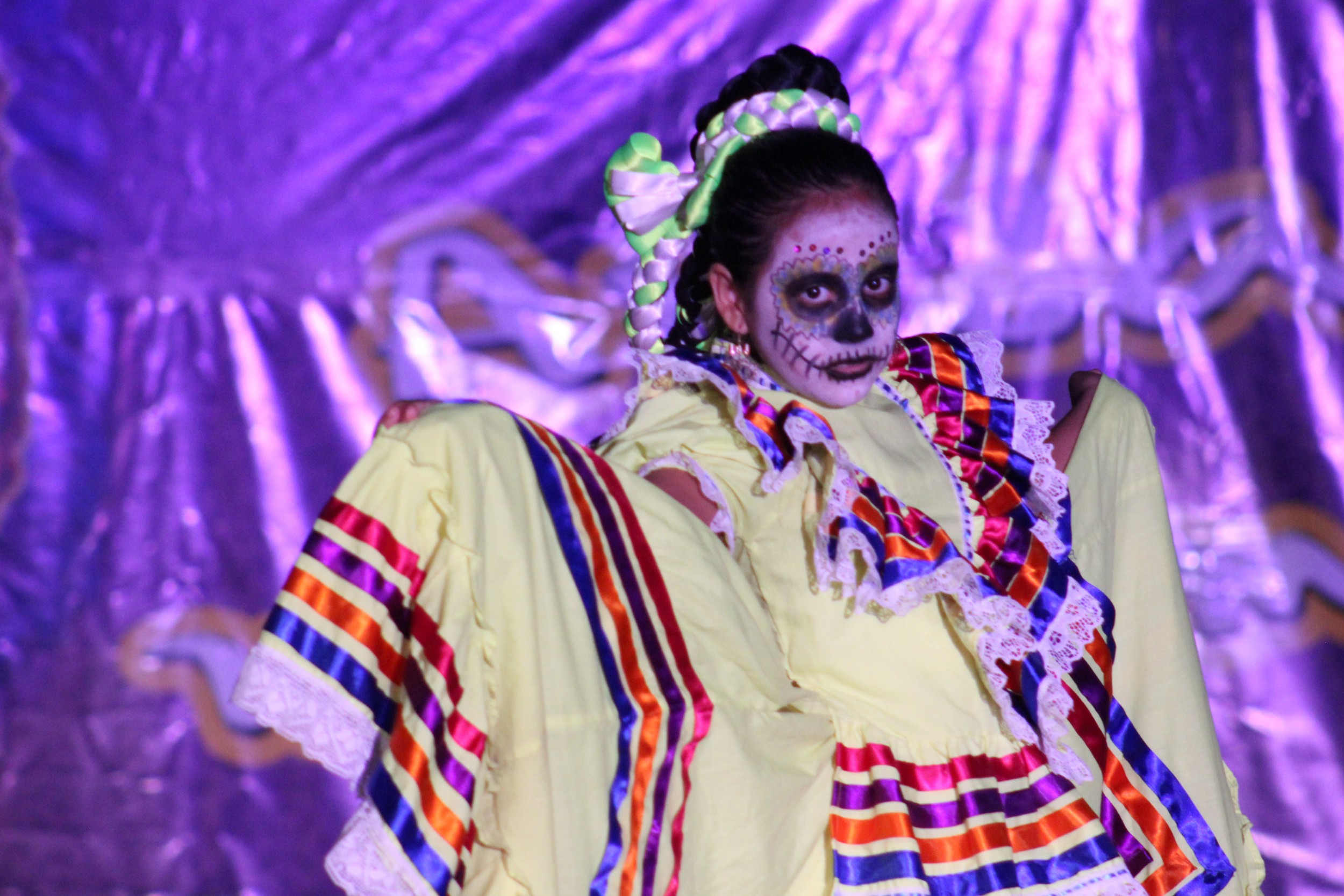 Skulls are a prevalent theme of Dia de los Muertos with sugar skulls as one of the main decorations. They can be made of edible things such as chocolate and candy or purely decorative in wax or ceramic.

This theme carries over into the people who celebrate by painting their faces to look like skulls. The Aztecs would have worn masks.  Wearing a skull may seem morbid or creepy, but it is meant to be a way of connecting and revealing another side of yourself.

I was surprised when I didn’t see anyone painting faces in the plaza so I decided we’d do it ourselves. 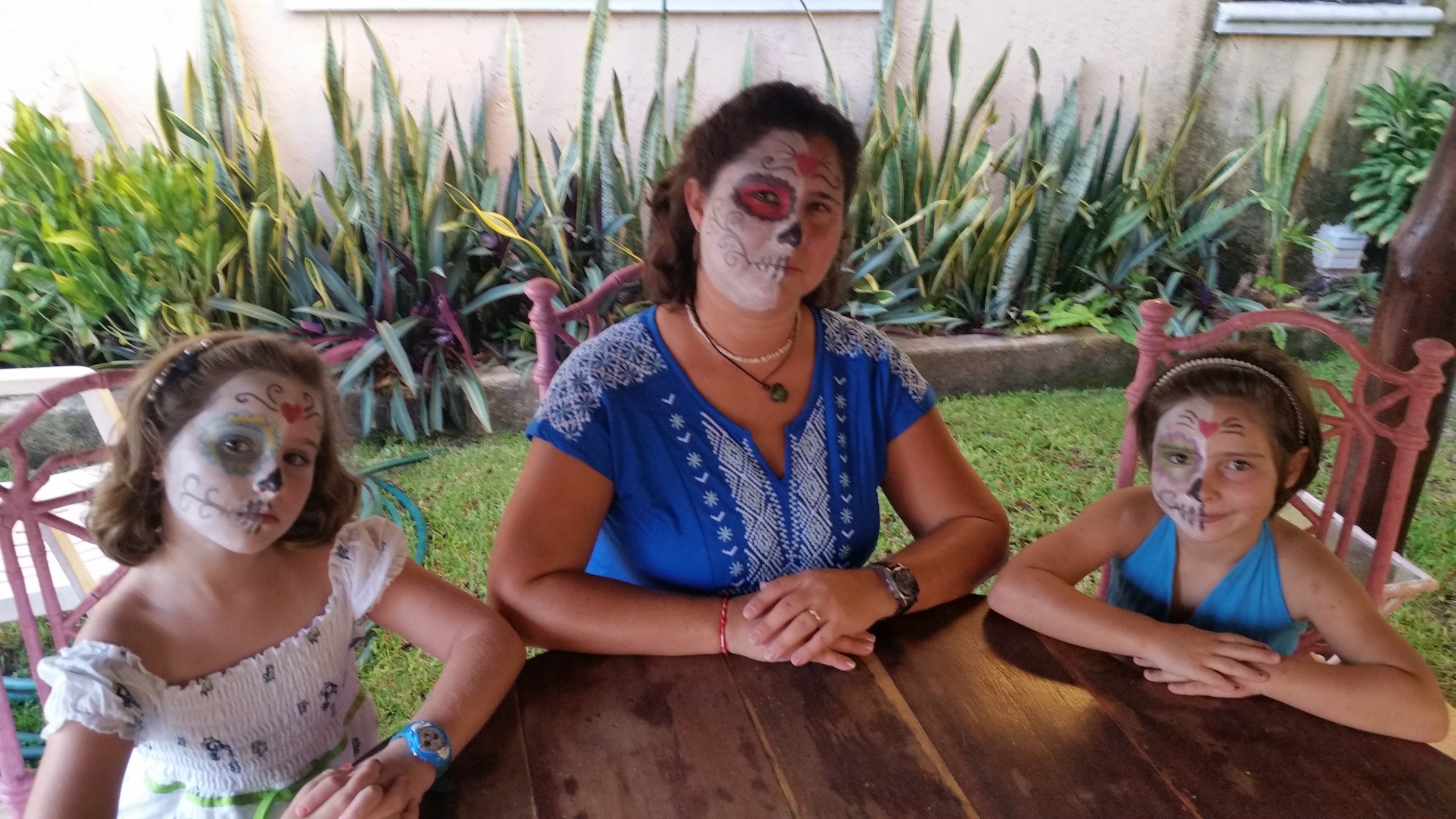 Going to the Cemetery

November 2 is the day most people go to the cemetery and place their offrendas, the gifts for their visiting loved ones, and to spend time with them. We missed going because our car started leaking oil and we had to turn back, but as we drove by we saw cars parked along both sides and crowds of people bearing gifts and flowers. Although I was disappointed to miss this main event I was kind of ok with not being there because I didn’t want to intrude on the families visiting their loved ones, even though I had been assured that it would not be offensive to go as long as we were respectful.

Instead I went the next day and visiting when the offerings were still fresh but the people were gone. The cemetery is large and backs up to the jungle. The island is made of old coral and limestone rock so the dead are usually placed in family mausoleums above the ground, making it feel like a small city of remembrance. The names and dates are hand painted with care. More than once I felt tears come to my eyes and had to remind myself that Dia de los Muertos is a celebration, not a sad thing.

It was interesting to see not only crosses and flowers but drinks (beer!) and small items like toys and handbags. Rich and poor, everyone ends up here. Some graves were covered with extravagance and some were simple candles protected inside of soda bottles. People pay respect in whatever way they can, and they are all beautiful in their intention. 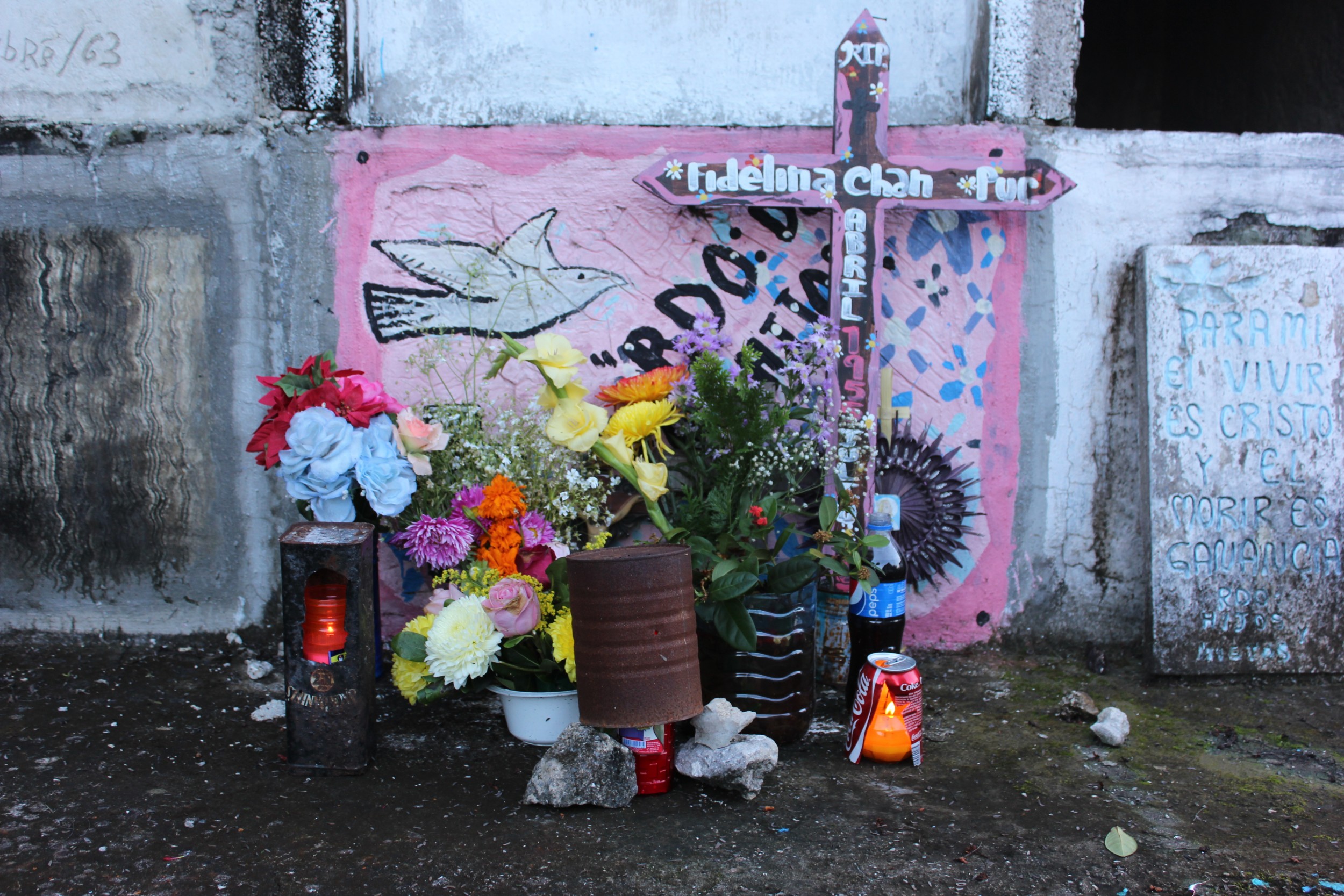 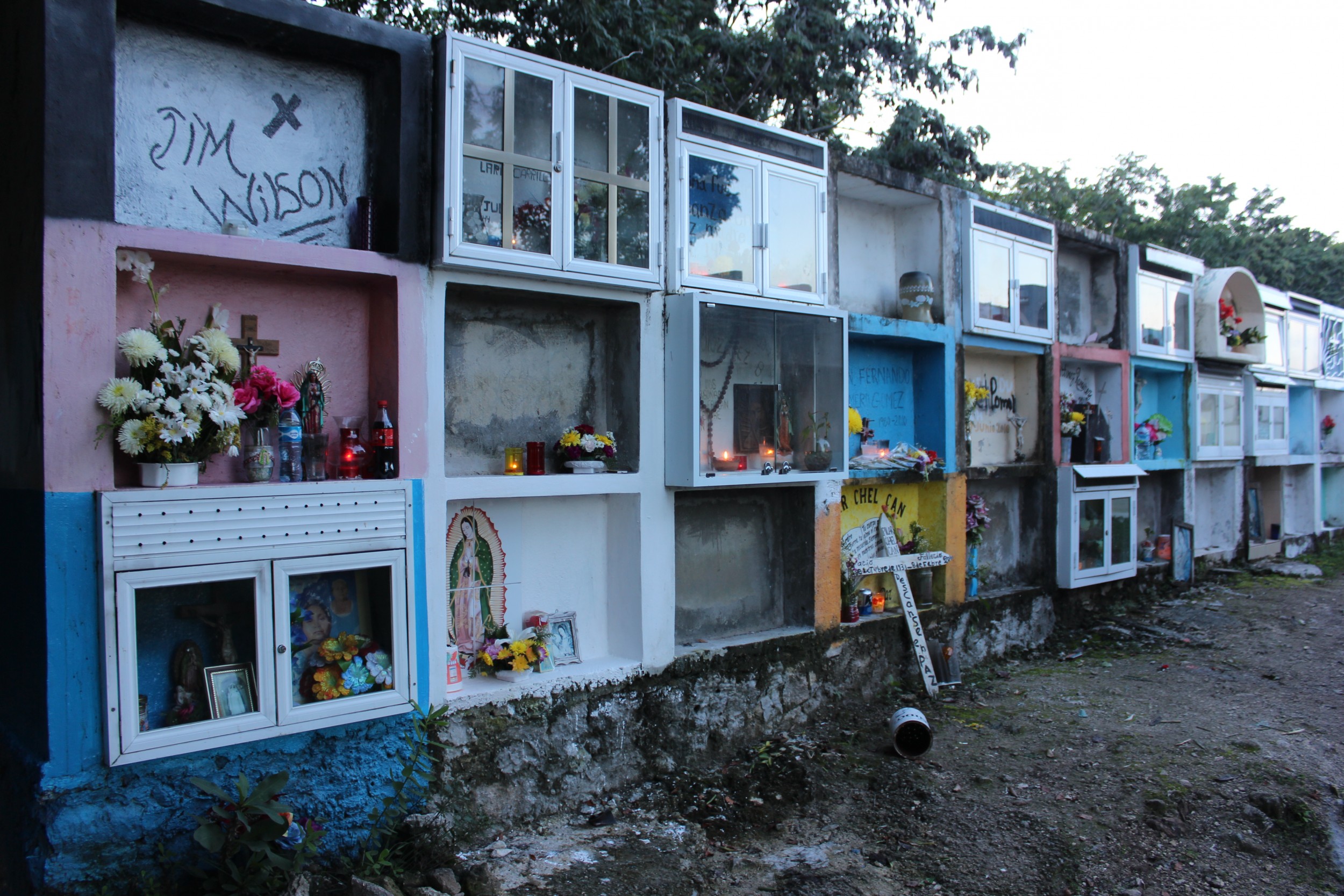 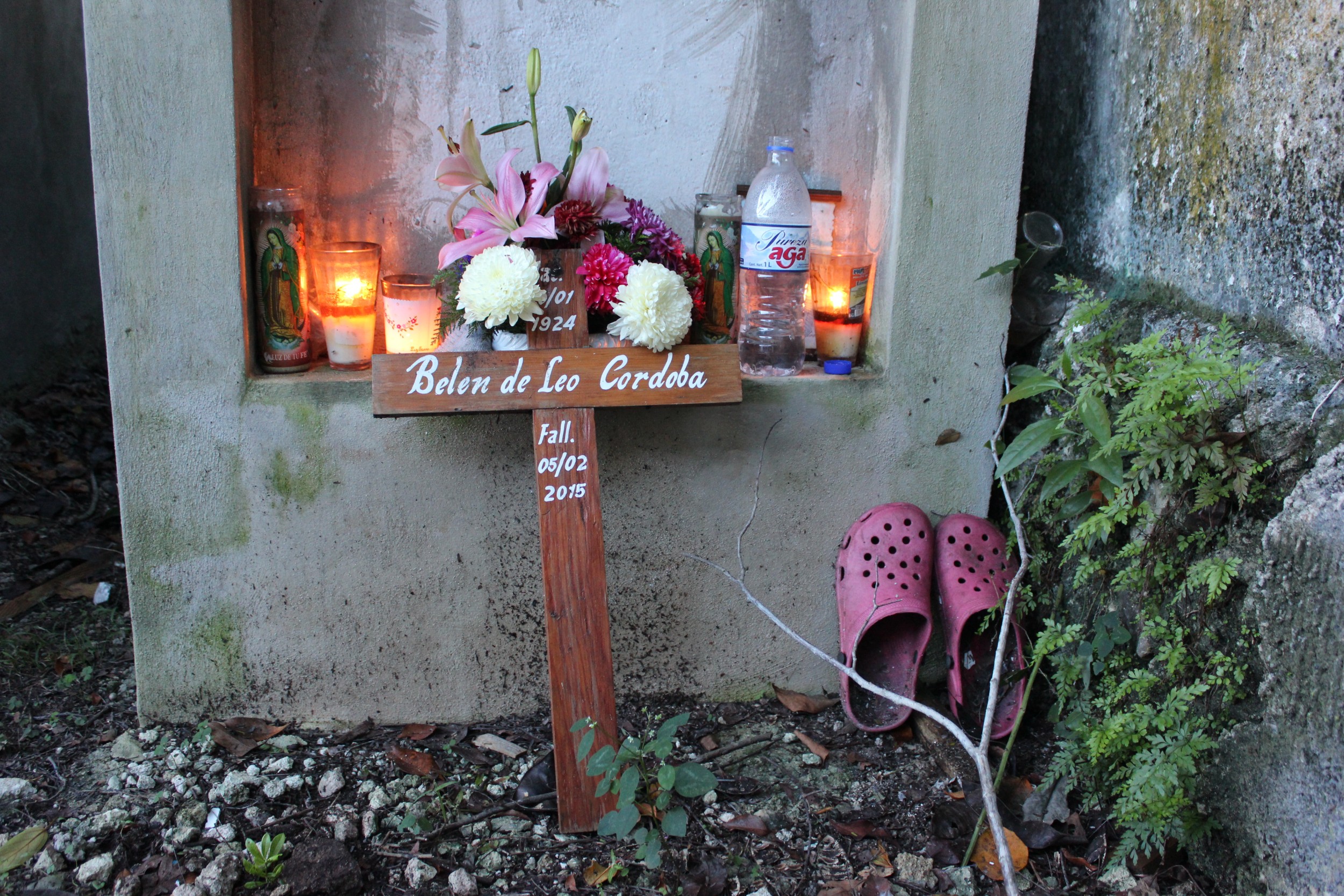 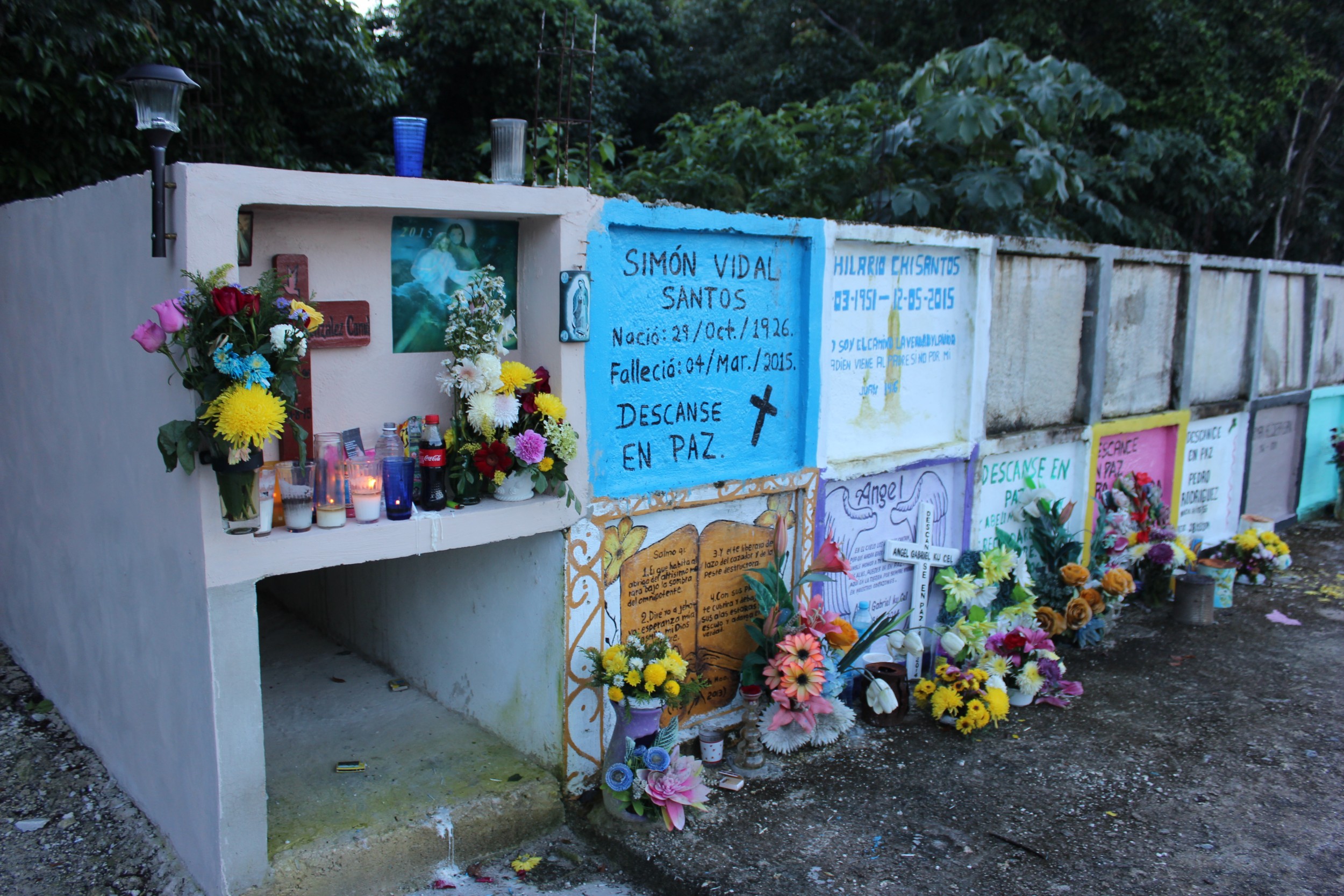 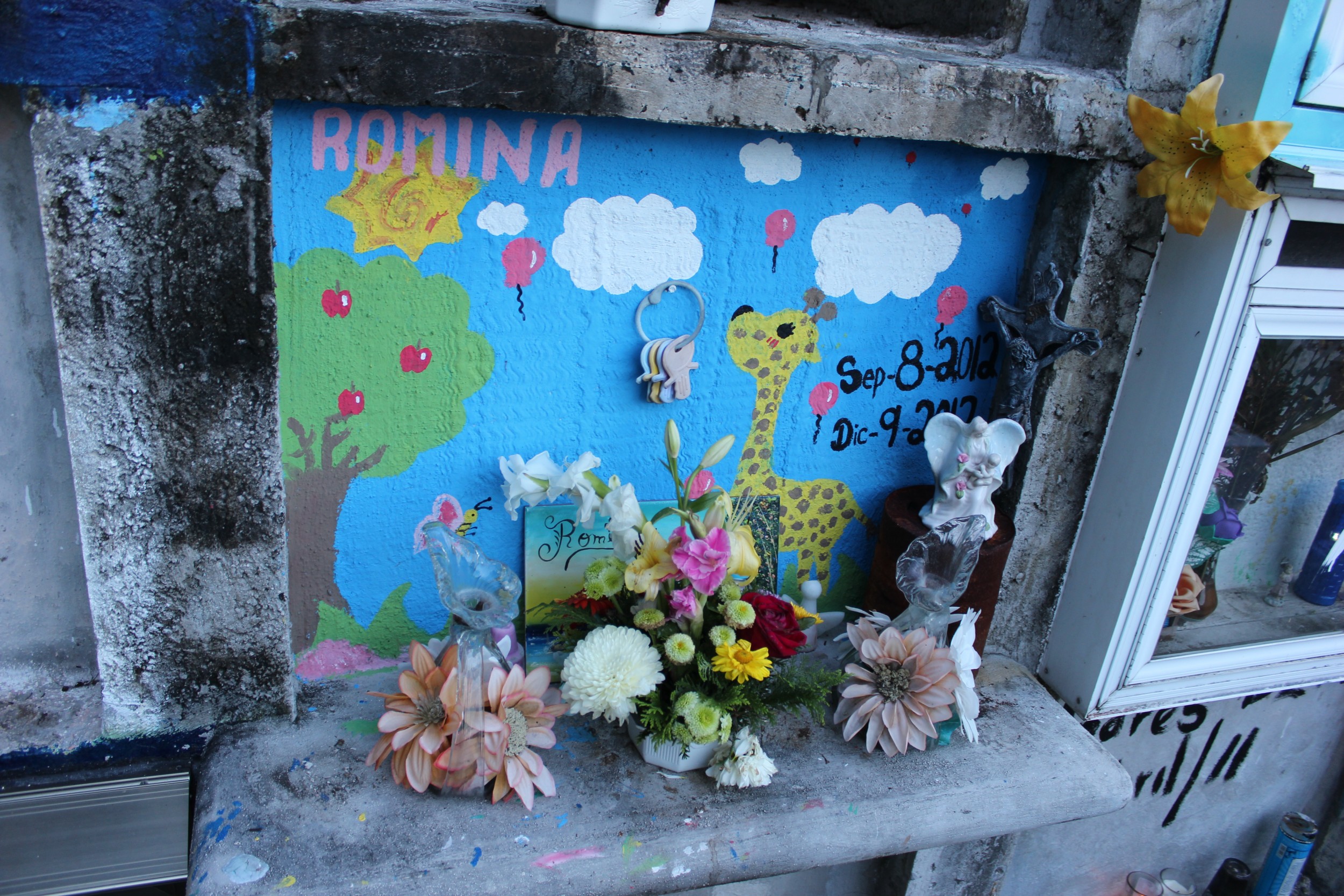 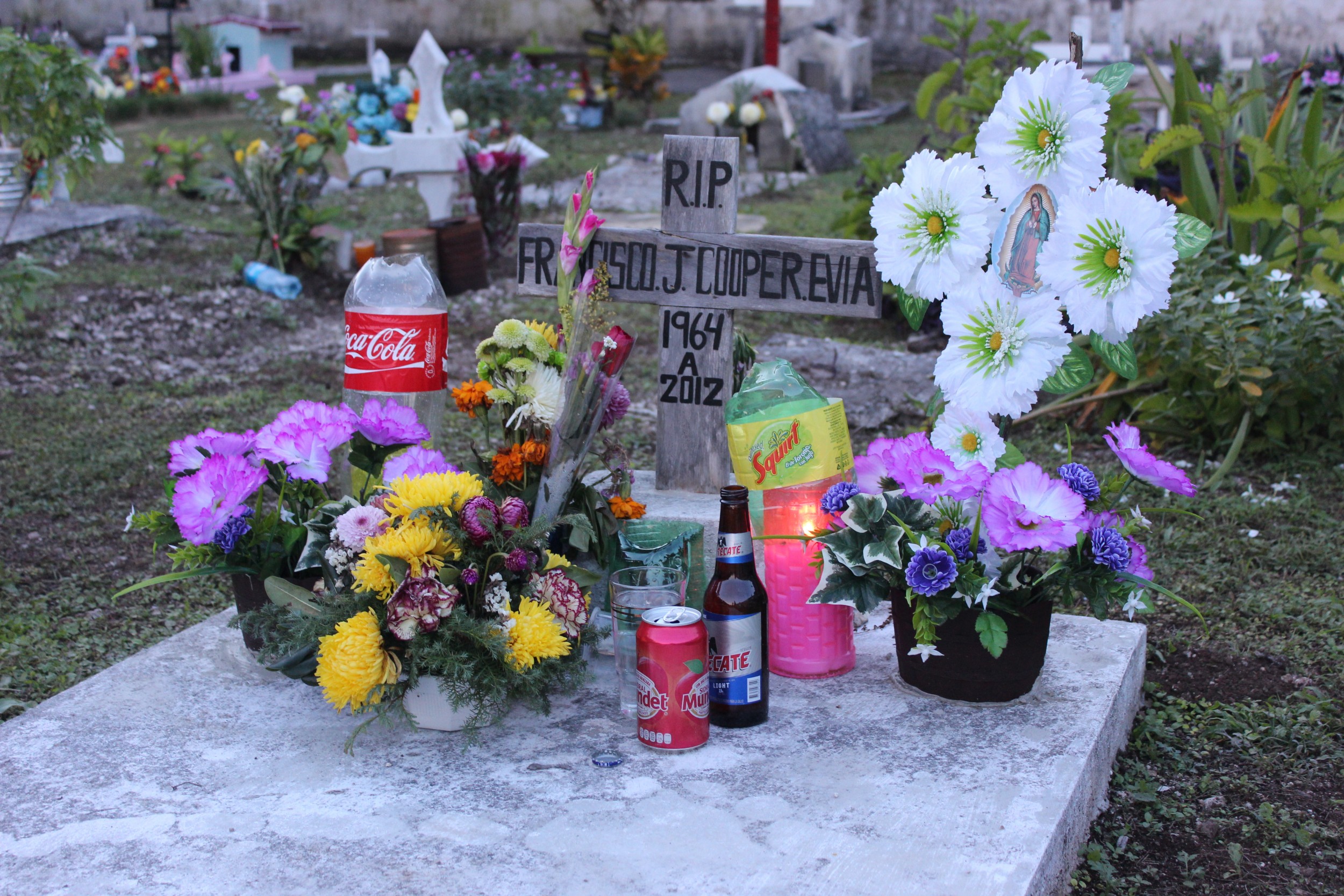 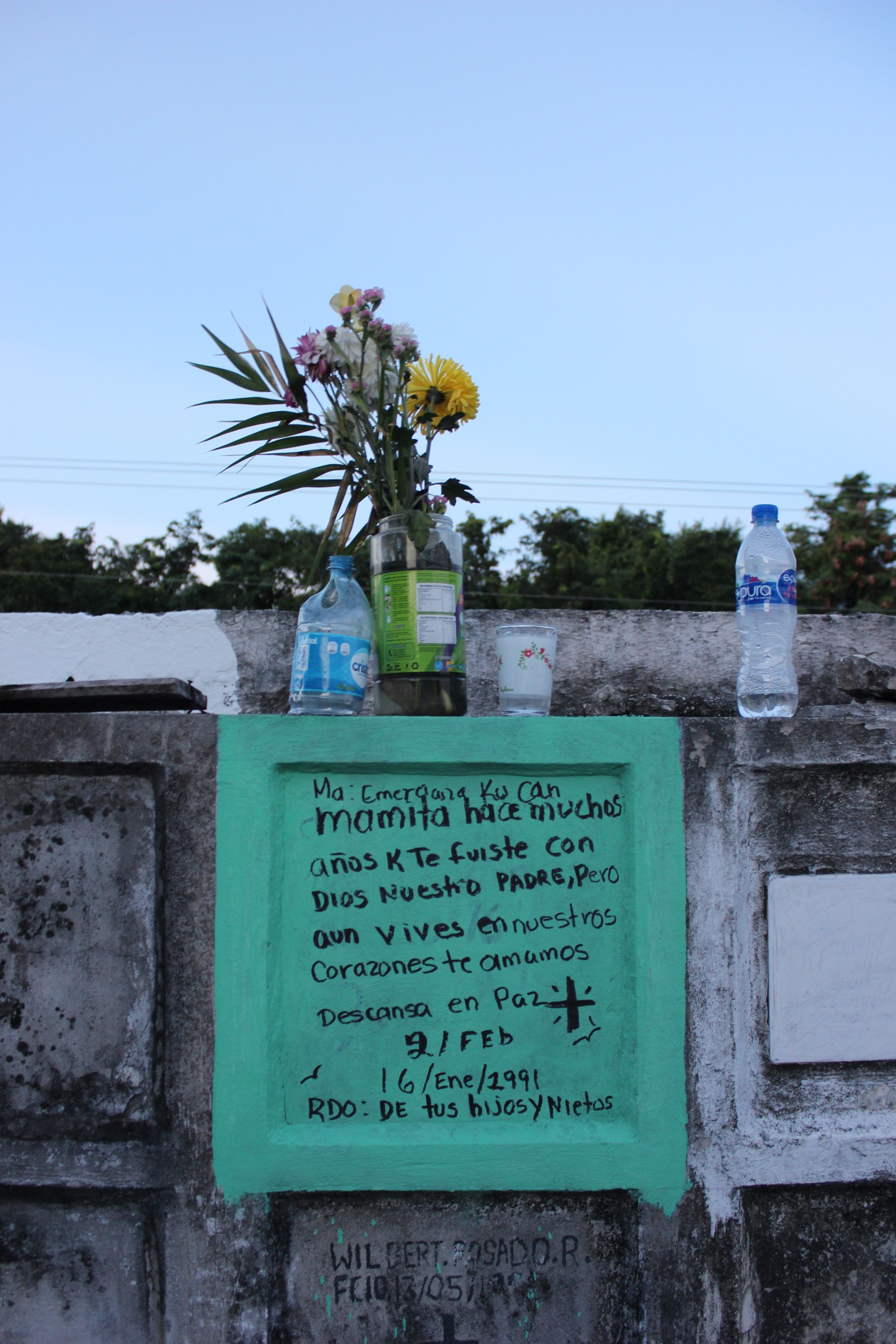 While seeing Cozumel’s display was enlightening, next year I’m hoping to be in a place that has a larger celebration. Oaxaca is high on my wish list and is reputed to be one of the best places to be this time of year, but only time will tell where we end up.