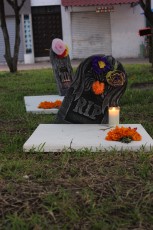 Another day, another American shooting, this time in San Bernadino. There seem to be more and more of them since we moved to Mexico, and all I can think of when I see them is how glad I am that we got away. That’s right, I said it. I feel safer here in Mexico than I would in the U.S. right now.

My children don’t have to do lock down drills at school or worry about what their classmates have in their lockers. They don’t have to go through metal detectors to get in or submit to police dogs’ inspection. Parents are recognized on sight instead of having to log in with a driver’s licence through a computer in the vestibule.

We can go to a movie theater or shopping mall and it never crosses my mind that we might be shot.

The driving might be atrocious, but there is no road rage. No one is going to get out of their car and attack us for driving too slowly or cutting them off.

There is petty crime here in Cozumel  because people are poor, but being hurt or killed on purpose here is very unlikely.

Mexico has this reputation of being a dangerous place, that the drug war is raging and people on the street are getting caught in the cross fire. In certain places that is true…but not everywhere. It is possible to avoid those certain places and live a normal life in safety, and that is the difference that makes me feel safer here.

In the United States right now all bets are off. There is no respect for innocent bystanders, there is no rhyme or reason to these terrorist attacks that are coming from our own people, and there is no way to know what’s coming next or how to avoid it.

Virginia Tech. Sandy Hook. Columbine. These places become have household words, known markers of violence and tragedy in our society.

What’s happening in San Bernadino today is the 352nd mass shooting this year in the U.S. Don’t believe me? You can look it up on this website that tracks Mass Shootings in America-yeah, that exists.

“Please lock your doors and stay inside” tweets California House Representative Pete Aguilar. The responses vary from “@RepPeteAguilar @sbcountysheriff please please do something to make some change happen. We need more than prayers – we need ACTION” to “Everyone arm up and shoot murderers on sight.”

I wonder how people can still be arguing about this problem. I don’t understand why everyone isn’t demanding that we do everything possible to fix it. Not find a way to fix it, not blame it on someone else, but do everything and anything that might stop people from deciding that the way to solve a problem is to kill someone else. Gun control, paying for improved psychiatric care, political changes, what part of it is objectionable enough or profitable enough to let another one of our neighbors die while we argue?

Mass shootings by our own citizens are not a problem that’s isolated to one area, to one community, to one religion or one ethnicity. It’s bigger than that now. It’s touching us all, and there is no place safe from it-not schools, not churches, not your job or your night out.

Sadly I think it is cultural, and cultural change is slow and difficult. Merriam Webster dictionary online gives this definition of culture:

: the beliefs, customs, arts, etc., of a particular society, group, place, or time

: a particular society that has its own beliefs, ways of life, art, etc.

: a way of thinking, behaving, or working that exists in a place or organization (such as a business)

It’s not about guns. It’s not about mental illness. It’s not about bullying. It’s not about prejudices. It’s about ALL of these things and more. It’s things deep in our culture that has led us to this place in the United States. Americans have to change together if we want to stop having shooters threaten us in our everyday lives, and it’s an understatement to say that’s hard. It’s overwhelming.

It’s also the responsibility of every single person, not just the legislature. We have to make it a priority to figure out why someone would think it’s ok to do this, how it might happen, and stand together to make it clear that it has to stop. Right now we are not standing together, and our divided house is rapidly falling apart.

Living abroad is my way of showing my kids that there is another way, that they don’t have to live in fear. I’m teaching them that they are in control of their own lives, their own happiness, and that there is no point at being mad at someone else when you don’t like your life. That when someone else makes them unhappy or threatens them the answer is not to go vigilante but to try to find out what caused the problem in the first place and help solve it. It’s that simple for us, the first step in changing our own family’s culture.

I may be far away, safe in Mexico, but my heart looks back on the news coming out of my country and aches with sorrow. Doesn’t yours? Now what are we going to do about it?