How Is The Cat Doing? 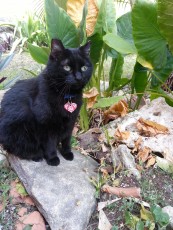 Now that we’ve moved to Mexico one question is being asked over and over: But How is the Cat?

Before I answer, a little background. Stormy is about 10 years old. We got her from a friend of ours when she was a kitten, half wild and living outside with a ton of relatives due to an uncontrolled cat population. Her predatory instinct fully intact, she caught “gifts” for us all the time and left them on the front porch so that when you opened the door to go out there was a snake/mole/bird/bat/mouse staring up at you. I was most impressed with the bats.

Although she was an indoor cat she loved to go outside and prowl around, until one winter she went outside and didn’t come back. Temperatures had been record cold, below 0 F every night. She had disappeared one week before we were to leave on vacation for 2 weeks, giving us only a limited window to find her. The day before our flight I asked the neighbors to watch for her and gave them a key to let her in, hoping she’d make it back, but I knew the odds were not good.

When we returned she had been missed a total of 3 weeks. I sent our oldest, Chenoa, out back to call for her right away without expecting much. We were shocked to hear an answering meow from under the deck. Terribly skinny, beat up and scared, Stormy let us coax her out and bring her back into the warm house. We fed her canned tuna and fussed over her, amazed that she had survived. Her ears had both been cut across the top, probably chewed in fights with other cats, and as they healed the tip broke off of first one and then the other leaving her with distinctive squared-off ears instead of the normal feline triangles. She purred and rubbed and was so happy to be back inside with us. The girls were thrilled, and I was amazed that she had survived out in the cold.

Stormy recovered and fattened back up, but she had lost her interest in going outdoors. She would venture out onto the deck now and then in nice weather if we left the sliding glass door open, looking back over her shoulder at every noise to make sure we weren’t closing it. She didn’t go out to hunt anymore, and that was ok too, I couldn’t blame her for being afraid.

That was two years ago. In Iowa she had settled into retirement, lying around the house, lying on us, and enjoying an easy life. She has always been mellow, but now she was positively lazy, even when about to be stepped on. When we decided to move I felt that she would not only be the easiest pet the travel with but that after her ordeal she had earned the right to stay with us and be taken care of.

I wonder what she thought the first time we put her into the glorified duffel bag that would be her travel carrier and zipped it shut. We took her for rides in the car while in the carrier to get her used to the motion, and the first few times she meowed in protest, but she soon settled down and tolerated road trips in silence. Others told me stories about cats that clawed their way out of the carrier while in flight and I really hoped that her calm would hold up.

We planned our move to Mexico and the vacation before it carefully, keeping her in mind along the way. She rode from Iowa down to my mother’s house in Arkansas without trouble, a 7 hour drive. Over the two weeks we vacationed in the Ozarks she settled in at my parents’ house; she didn’t even mind their dog, as long as he didn’t try to lick her. Mom said we’d better come get her quick before she got too attached, but Stormy always knew who her people were and she was glad to see us when we came back to get her.

FLYING WITH A CAT AS CARRY ON

She rode to Kansas City in her duffel bag without protest, even went through the airport in it without making a sound. On the plane I wedged her carefully under the seat in front of me, telling my seat mates to please not kick my bag when they got up because it was my cat. Everyone was surprised-it really does look like a duffel bag after all. I put my foot next to the mesh side of the carrier so she would know I was still there even though she couldn’t see me. So far so good.

Takeoff is always scary for me. Chenoa and Jason laugh at me for gripping the armrest and gritting my teeth as the engines roar and we rumble down the runway. Stormy apparently feels the same way. She started yowling loud enough that we could all hear it over the jet engines and I forgot my own fear. I leaned down and unzipped the top enough to get two fingers inside and scratched whatever furry part of her I could reach, cooing and trying to reassure her. Even while telling Jason how easy it would be to fly with a cat I had been afraid that she would annoy the other passengers, yowling or possibly stinking up the plane and now it seemed to be happening, but after a minute, she quieted. We both relaxed a little.

During our layover in the Atlanta airport I had time to take her out in the bathroom and dumped the poo out of her carrier. She smelled like pee, but not much I could do about that. As she calmly walked around on her leash in the handicap stall I thought how strange it must look to people outside seeing a black cat peeking under the bathroom door and laughed.

Back into the box, one more flight (only a little yowling on takeoff this time,) and she went from cat to gata.

Coming into Mexico through the Cozumel airport we had to be checked by a security dog. I pulled away, telling the officer that my bag held a cat because surely the dog would react to her. I was pulled aside with Stormy into a small glass office but waved Jason and the kids on. They had already spotted our bags coming around on the carousel and surely this wouldn’t take long.

At first there was only one woman in the office, and she had me take Stormy out of her bag once we closed the door. She seemed a little unsure what to do and I wondered if she was a veterinarian or just some employee, but decided it might be rude to ask, so I just kept smiling. She looked in the cat’s eyes, ears and mouth, took her temperature with some sort of ear thermometer that I had never seen, and listened to her chest. When she looked in her fur to check for fleas I was worried she might object to the dry flakes of skin that we called kitty dandruff, but in the end we passed inspection.

Our paperwork was another matter. I had been forced to go to my mom’s vet in Arkansas while we were visiting because the required health certificate had to dated be less than 10 days before our flight. They assured us that they knew what was needed for international travel, that they filled out lots of health certificates for retirees who took their little dogs on vacation.

We discovered that the vet’s staff had given me a copy of the health certificate, and now the Mexican Agriculture Officials wanted the original. The woman showed my papers to a man who shook his head and called in another man. This 3rd man then got out a large binder full of other people’s health certificates and flipped through saying “Original” and pointing over and over at the colored official stamps that made it clear they were originals. My stamp was black.

I told them that I understood, but this was what they gave me and it was all I had. They called in another man, a higher official, and he again said they needed the original and I again agreed but said this was all I had. Finally they said ok, but scolded me that next time I should bring an original. I said thank you, took my copies and my cat and left. Fast.

So we successfully moved the cat to Mexico. Most cats are intimidated and uneasy in a new place, but Stormy has done really well, behaving from day one in Mexico as if she had been in on the plan. She roams the house, she takes siestas, she even goes out in the backyard 2 or 3 times a day and stalks lizards. The neighborhood birds are not amused by her, but she shows no interest in them. Her fear of the outdoors seems to have vanished, as if she knows there is no chance of being locked out in the cold here.

She is shedding all her extra hair and slimming down in the heat (aren’t we all!) and she has more energy and interest in her surroundings than I’ve seen in years. I think Mexico is as good for her as it is for us.

She often sleeps curled against one of us at night, a furry comfort blanket that I am glad to have even in the heat. I have always had pets, and I’m glad to have her with us now, glad that we can fulfill the promise we made to take care of her and glad that my girls still have their sweet gata.