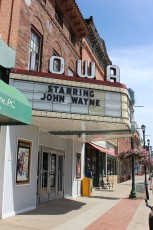 Did you know that when he was born on May 26th, 1907 John Wayne weighed 13 lbs?! The celebration of his 107th birthday is underway this weekend in Winterset Iowa, and I decided to go see it for myself.

Each year there is a community birthday bash for the biggest celebrity this small Iowa town ever produced, even though he only lived there for the first 4 years of his life. I drove down “John Wayne Drive” and easily followed signs rather than bothering with directions.

The John Wayne Birthplace Museum is inside the four room house where he was born, and claims to be the only museum in the world dedicated to celebrating his life and career. I realized that after living within half an hour of it for 20 years I have never been. I was recently reminded to appreciate things we have here that seem exotic to outsiders. I’m not a huge John Wayne fan (I think of his movies as something my dad watched,) but I’ve seen a few and liked them. I was curious to see a hometown museum of a major cultural icon, and as I expected it was small but lovingly devoted.

Outside there is a tall bronze statue of Wayne that looks like he strode out of a western and jumped up on that rock to call for a posse. A patriotic icon, he’s surrounded by American flags.  Parked nearby there is a pretty nice conversion van elaborately painted with an image of the same cowboy watching from the doorway of the saloon.

The entrance is through the gift shop, which seems to be in what was once a garage behind the house. Everything here is plastered with John Wayne’s face: tins of mints, beer coozies, BB guns, coffee cups, beef jerky, Christmas ornaments, and a child’s complete dining set with the classic cowboy on his horse. Movie posters, DVDs, and postcards of course, but I couldn’t stop staring at the life-sized cardboard cutouts (I so wanted to snap a selfie with one despite the “no pictures” signs!)

In the guest book were entries from states all around the Midwest and one group all the way from London, England. It was impressive how far these fans had come-only one other visitor was from Iowa.  In the movies foreigners are shown trying to connect with new American friends by saying “John Wayne!” enthusiastically. Like it or not, he’s an international ambassador.

The entry to the actual house is through the back door, which made me feel like I was sneaking in. Stepping through a tiny mudroom into a slightly larger kitchen I was alone. I can’t imagine how a crowd could fit in the space so I’m glad I came early. Period furniture has been collected and used to stage the house, but I find it hard to believe they had this much stuff. There were glass bottles and pieces of broken ceramic dishes that were dug up during a renovation of the place in 1989, but all the rest was brought in for ambiance. Multiple pie safes and primitive cabinets held faded dishes and warnings not to touch these irreplaceable antiques. A child’s trundle bed took up one corner with quilts draped across it. A kerosene stove in the kitchen and a pot-bellied cast iron in the next room seemed especially redundant, but I understood they were trying to show what the house might have been like when the family lived there from 1905-1910. No pictures allowed, of course.

In the third room I caught up with the Brits and a few others. A natural people watcher, I found listening to them almost as interesting as the museum itself. The volunteer/guard stationed in the corner would ask “What’s your favorite movie?” and they would talk about this or that film. The admiration in their voices was what caught my attention, and I felt like a non-believer who had snuck into church. I filed away a few overheard comments and movie titles in case she asked me what my favorite was: The Quiet Man and Angel and The Badman.

Pictures in plain frames with plastic printed labels from the early 90’s covered the walls. A whole life laid out before you from his childhood to the newspaper announcement of his death at age 72, I wondered what he would think of it. He had three wives, and I wondered what happened to them. I was fascinated with photos of the Winterset town square from 1905-1910, wishing I could compare them to what I had just seen driving in.

One section of the wall had letters praising both Wayne and the museum dated from 1981-82 (around the time the museum opened.) They came from celebrities he had worked with, including James Stewart, Maureen O’Hara, Gene Autry, and even Ronald Regan.

In glass cases were other memorabilia from movie sets: an “authenic toupee worn by John Wayne in the movie Chism,” a complete “Western costume” with “trousers and cowhide vest” from Hollywood, CA, and a model of his yacht, the Wild Goose. A converted minesweeper, the full sized version is currently available in Newport Beach if you want to rent it.

What struck me most about the museum was not the things that were in it but the people. Those who collected all that stuff and carefully arranged it in that house. The visitors who had driven or flown there to walk through with me. That’s what makes this museum special; the simple happiness that it brings people. I think the Duke would like that.

They are building a new, modern John Wayne Birthplace Museum around the corner, due to open in May 2015. The idea seems to be to modernize it with touch screens and video displays, so if you want to see it in all it’s small town glory you’d better head on down, Pilgrim. (Which movie is that from anyway?) Even if you’re not a fan, John Wayne is part of our national history and part of how the world sees us as a nation. That’s travel worthy.

Disclaimer: I was not paid or given any compensation to write about this organization.

To learn more or find event times go to http://johnwaynebirthplace.museum/index.html