What The Hell Happened to The Machine Shed? 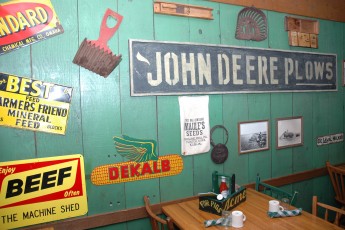 My husband took us out to one of his favorite restaurants Saturday night, The Machine Shed. It’s located just outside of Living History Farms on the edge of Des Moines, and it’s always been a celebration of farm life and hearty cooking.

The walls were rough wood reminiscent of the inside of a barn, covered with old signs and artifacts from generations of farming. The food is meat-heavy and plentiful, served family style on wooden tables. Having grown up on an Iowa farm Jason loves it.

When we approached the doors we noticed they were new, streamlined…but when we walked in it was a shock. The shop in the lobby has been remodeled from a country store into a Crate and Barrel (really, that’s what our server told us they were going for.) It’s all modern and shiny and…well, bland.

Our kids usually enjoy the toys and books and tractors when we have to wait for a table, but that seems to be gone. The new shop is full of knickknacks and household décor with tasteful lighting. Worst of all are the televisions. I so hate going to a “family restaurant” and having to tear my kids away from the flashing t.v. screens that surround us. They are in both the lobby shop and the dining room now, and the place was noticeably quieter as people craned their necks instead of talking to their companions.

And after the remodel this John Deere sign behind our table was pretty much the only remnant of the old character of the place.

When we were seated we were so disappointed to see that the antiques and old signs that decorated the walls of the dining room were gone. The walls have been painted a soft grey, and there was shiny modern lighting. I heard another diner behind us exclaim “They ruined it!” and I agree.

The wait staff is still dressed in checkered shirts and denim overalls that matched the farm theme but now they clash, an afterthought in the new streamlined look. I foresee a uniform change in the near future, which is also sad.

We asked our server if people liked the new look of the place, and she seemed nervous, saying reactions have been mixed. She encouraged us to let the company know what we thought, but even if everyone who came through the door hated it the money is spent and the damage is done. I can’t imagine they’ll ever return it to the way it was.

The remodel of The Machine Shed is an attempt to be more trendy and cool, but that’s not why people come here. They come for the warmth, the familiarity and the character of the place. The reminders of old times on the farm. With the remodel it’s lost its uniqueness in favor of conforming to design trend that won’t last. So far the food is the same, but how long until they start lightening up on the portions and adding in gourmet options? And it just doesn’t taste the same with so much disappointment in the surroundings.

So heads up to all of you who love Iowa farm traditions, The Machine Shed has fallen victim to modernizing. It’s a real shame, and we won’t be going back again.