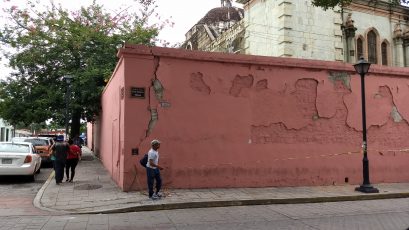 Two days ago Mexico had one of the strongest earthquakes in decades. Usually when something happens in Mexico we get “Are you ok?” messages, laugh a little and explain it was on the other side of the country from us. Not this time.

We had just moved to Oaxaca less than a week ago and I was tired from setting up a new house in a new place, so I went to bed by 10. Jason stays up later so he had just come to bed but was still awake when the shaking started.

When I woke up it felt like someone was jumping on the bed. I realized the whole room was moving. Alarmed, I sat up but I didn’t understand what was happening until I heard Jason calmly say “Earthquake.”

Without thinking I leapt out of bed and ran down the hall to the girls’ room, Jason right behind me. It felt like we were in a fun house, the floor moving under my feet as I tried to go forward.

In the doorway to their room I stopped, clutching the door frame. All I could remember about earthquake safety was to get in a doorway, so that’s what I did, hoping that being on the second floor was ok. 8-year-old Rory sat up in the nearest twin bed and I called her to come to me. She jumped out of the bed and ran into my arms in the doorway.

10-year-old June was still under the blankets and seemed to be sleeping through it. I was wondering if we should wake her or let her sleep when the shaking intensified. I hadn’t thought about it getting worse, and felt a pang of fear that maybe we should have gone downstairs after all, but it was so rough I didn’t think we’d make it down the stairs.

June finally woke and sat up, looking around wildly, and I called, “It’s an earthquake, come here, come here!” She ran across the room and Jason and I held the girls between us.

All four of us were crammed in the doorway to their room as the floor moved and the lights swung from the ceiling. Looking at videos online later June asked me who takes videos during something like that, saying “Are they crazy?” Don’t get me wrong, I kind of wish I had the presence of mind to get a video but I had higher priorities at the time like kids and safety.

It seemed to shake a very long time, but it wasn’t sharp and violent, more of a rolling feeling. It wasn’t actually all that scary at the time, just interesting and, well, stimulating for lack of a better word. We were very much awake, but not hysterical. No one cried or panicked, so I think we did pretty well (keep in mind we’re from Iowa, land of tornados, not earthquakes!)

When it stopped we let go of each other and went downstairs to check on the dogs. They were in their kennels in the kitchen and seemed fine, so we put them outside for a bathroom break.

A quick look through the house didn’t show any structural damage, although we noticed a few new cracks the following day. Several things had fallen off of shelves and some was broken, art and pottery, one of the champagne flutes in the cabinet and a brand new bottle of rum that had smashed all over the kitchen (sorry Captain Jack.)

I started searching the internet on my phone and quickly confirmed the earthquake, initial reports saying it was a 7.8 based in the neighboring state of Chiapas. Later this would be upgraded to 8.1 and located in the Pacific Ocean just south of the state of Oaxaca.

Internet strength was surprisingly good. The lights flickered, and I thought surely we’d be without power for the rest of the night but they came right back on.

The next morning we got up and started to get ready for school, but a message came that it was closed while they checked the buildings for any structural damage. Throughout the day people checked on each other online and in person. The rental house’s handyman, Nico, came by first, then the Friday cleaning crew, then a man who had been sent to check the structural integrity of our house. We felt well taken care of.

I saw our property manager, Bill, who is from San Francisco and asked if he had slept through the earthquake. He laughed. He said even after living in California most of his life he’d never felt anything like that.

I don’t think I slept very well and by early afternoon I decided to take a nap. As soon as I lay down on the bed I could feel it moving, making me want to jump up again. Instead I held my breath and waited, and the aftershock passed.

We would notice them a few times during the day after the earthquake but only if we were holding still and paying attention. I checked an earthquake tracking site at 3pm and saw there had been 45 earthquakes in the past 24 hours, most aftershocks that we hadn’t even noticed. I was glad to be missing them, but wondered how it felt to the people that were closer to the source, those that felt the full force of the magnitude 4 and 5 level of shaking. It was something I didn’t ever want to feel again.

Our Earthquake story has a happy ending while many others did not. It was scary as hell, and there was very little we could do, no warning system that would have given us time to prepare.

The quake caused panic in Mexico City where an 8.0 caused severe damage and killed thousands in 1985. It was felt by some of our friends all the way up in Cozumel. The hardest hit areas were poor places, such as the town of Juchitán where buildings of brick and cinder block that came down like dominos and buried families inside.

We are very aware how privileged we are to travel as we do, and when natural disasters happen privilege can be the difference between life and death, between a few cracks in the house and losing everything. We are lucky that we were in a safe place and that the impact has been so minimal for us.

At the same time I am seeing first hand how alarmist the media is and how blown out of proportion the news reports are. One of the most ridiculous  articles states that the “monument almost topples as massive earthquake strikes Mexico,” referring to the Angel of Independence visibly swaying in Mexico City. People that are worried about loved ones here have no way of knowing how bad it truly is because the media is focused on only the most sensational, fear filled drama that scares the crap out of everyone.

Having gone through the earthquake then driving around the city seeing how normal everything is I am a little angry at the media for blowing it out of proportion and scaring people. They need to do better. Yes, it was a big earthquake, people did die and buildings did fall, but 99% of everything is ok.

However this is not to say help is not desperately needed for that other 1%.

Flags are flying at half-mast. Mexico’s President Nieto visited the hardest hit city of Juchitán on Friday and declared a three day period of mourning. He also said the government would offer aid to help with reconstruction, and heads of state for the Latin American countries of Colombia, Chile, Ecuador, Bolivia, Venezuela and Spain as well as the Canadian Prime Minister have all reached out to offer their assistance. Our own U.S. President has been silent, a fact that is especially embarrassing in light of the help Mexico has been providing after Hurricane Harvey in Texas.

The death toll is at 65 so far, and they are still pulling people out of the rubble. Locally I am proud to see that Mexicans were immediately coming together, with donation sites for water, food and basic needs popping up in parks and intersections. We’ll take some things over and do our part to help, knowing that they would do the same for us.

If you would like to help the Mexican Red Cross is a good organization, here’s a link to their site.