Do You Know the Way to Pa-len-que? Mayan Ruins in Chiapas 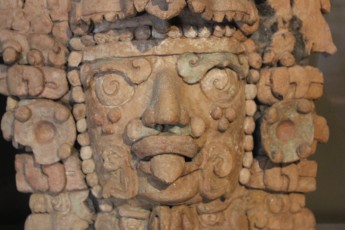 A highlight of Blogger Boot Camp with Marginal Boundaries was all the Mayan ruins we visited, starting with the one just down the road a little further into the jungle, the ancient Mayan city of Palenque. We started walking down the road, knowing that a combi van would come along soon and offer to take us the rest of the way. T.W had said it was about an hour to the ruins if you walked, and I wanted to protest that I didn’t want to start the day by walking that long, but I kept quiet.

I was able to look at the plants up close, saw my first “gringo tree” (because it’s red and always peeling) and saw a farmer and his son fixing fence. I stopped and took a picture, thinking of my husband Jason. Trying to practice my Spanish I told Christina “Familia de mi esposa es, uh, farmers.” Granjeros, from the word for farm, granja. A few minutes later a combi did pick us up and we rode the rest of the way to the entrance.

T.W. explained that he and Christina usually go to these places on Sundays because they are free for locals then. He pointed out the exit as we passed it and said they usually go in that way, but we’d start at the beginning today.

We bought tickets, avoided the vendors clustered around the area and went in. T.W. and Christina were taking pictures and shooting video, and I waited while they did an intro for Christina’s YouTube channel, looking at the large stone stairs ahead of us and thinking of all the ruins I climbed last year in Peru. There were teenagers sitting on the stairs texting, so I guess some things are the same no matter where you go. I stalked a small lizard with my camera until they were ready, and then we climbed the stairs.

The first view of Palenque is through the trees, but the scale of it stopped me in my tracks. All I could say was “Wow.” I had no idea it was so big, a huge long pyramid structure visible in the clearing ahead. It was actually multiple temples, the Tomb of the Red Queen, and the towering Temple of the Inscriptions. There were men up on the furthest part banging away with hammers, working to reconstruct and preserve the structure, which I found even more interesting. Archeology at work in front of our eyes.

We went inside the red queen’s tomb and looked at the red sarcophagus where she had been found, locked away behind a gate fitted to the crooked opening in the wall. We climbed the next structure, past a tour group sitting and listening to their guide lecture them about the place-I didn’t miss being stuck with a guide at all, even if it did mean I didn’t learn as much. We were free to roam.

There were crumbling scenes carved on the pillars and walls, sometimes only an empty shape that used to be a carving but had worn away with time. We walked inside, climbed up and down and explored every nook and cranny. I’ve never been to a ruin that visitors could run freely inside of and on like that, and I loved it.

A woman was sitting on scaffolding carefully using tiny brushes to repair something on a wall. I loved being able to watch her work. Some areas under the building were closed off, and T.W. said only the guided tours could go in. When we went down we found the exit and went in anyway, (to be fair there was no sign there saying to stay out.) I expected it to be cooler but it wasn’t, it was just wetter, more humid but still hot. There were sleeping platforms down here, large slabs of rock inside of tunnel-like hallways.

Back outside we left the main clearing, passing several vendors with crafts and jewelry spread on blankets under the trees. They weren’t very aggressive, which seemed odd because in the slow season you would think that making sales would be more important. Some took naps in the shade. I knew I couldn’t buy anything with my shortage of luggage space, but I took a few pictures. We crossed to a trail leading into the jungle and climbed, finding more ruins in the surrounding hills. I wondered how much work it took to keep the jungle from reclaiming it all, thinking of the men I had seen using machetes to trim grass and shrubs instead of mowers like we do at home.

One place had a curvy stone staircase up the hill and then a rope to help climb the steps leading directly to the building-when they give you a railing you know it’s going to be a tough climb! The steps there were huge, I had to stretch my short legs to reach one at a time, and I wondered why because weren’t Mayans small people?

Down the hill we came to another clearing, this one a square with the jungle on one side and three structures facing inward. The largest was the Temple of the Sun, a huge pyramid with lots of stairs. I thought about all the times we had complained about dragging ourselves up every ruin in Peru, but I eyed it, thinking that I should climb it. I circled warily for a while, taking pictures and watching other people go up. There was a smaller structure next to it that reminded me of a dutch cottage, maybe Hansel and Gretel, so I decided to try this one first. I practically ran up the stairs, taking the smaller ones two at a time. I was a little out of breath at the top and my heart was pounding, but it was so much easier than Peru! I was terribly pleased with myself until I realized that it was the altitude that was making the difference, not necessarily me. It was still a relief to find that climbing was so much easier here.

Back at the bottom I eyed the looming Temple of the Sun again. T.W. and Chris were headed out of the square, ready to move on. I couldn’t concentrate on the other ruins, blindly snapping pictures, distracted,  and I knew I’d have to climb it or I would regret it, so I marched over and started up the stairs. There were 8 to 13 steps and then a landing, and I rested at each one, taking my time. At the top there was a few other travelers and we took pictures for each other. Tim wandered back into the square looking for me and I whistled and waved proudly. Looking at the photo just doesn’t do it justice, but it may be because the accomplishment of climbing it was more important to me that what I would see at the top. I came on this trip worried that I wouldn’t be able to keep up, that I’d be exhausted and miserable as I had been at times in Peru, but I knew now that I could do this.

Going down was just as hard, if not harder due to having to keep my balance on the uneven steps. I stopped and took pictures of flowers that had forced their way up between the rocks, always impressed at the determination of life. We walked through the last of the ruins, past a ball court and public restroom that I was relieved didn’t cost me any pesos.

The trail down to the exit was literally downhill all the way, dozens of stone steps leading down through the jungle past waterfalls that I wanted to swim in and huge trees that had been there before the ruins. Crossing a suspended bridge we jumped around like small children to shake it, laughing. I felt strong and capable and happy to be there.

At the exit we walked down to the museum and went through. Many of the original pieces that were recovered are kept here where they can be protected and there are replicas in their place outside. It was hard to take pictures through the glass, and it seemed a little dry and formal compared to the wild ruins we had just left. I thought of how Jason would pour over every exhibit, reading it’s information, soaking in every detail. Most interesting was a room where a huge tomb was the only exhibit, a replica of the real one because it was too large to remove from inside the Inscription building that they had been working on. A drawing showed the back and forth path of the shaft that led to the real tomb, and T.W. said that at one time visitors were able to go inside there too. 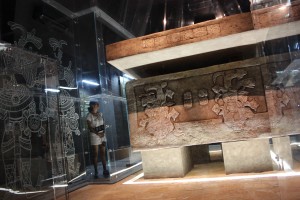 In a year or so they will stop letting people climb on the ruins in an attempt to protect them from further damage, as many of the other popular sites in Mexico already have. I hope that when I bring the family back here we can still climb and explore like we did today. It’s much more fun to be part of that bit of history, inside it and up close rather than a distant spectator. I understand why they have to shut people out, but I’m glad I came to Palenque before they did it. Hurry up and go!