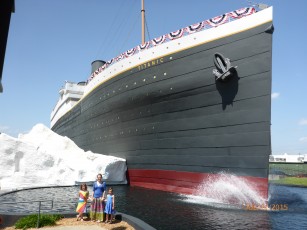 It’s been a bumpy ride here in the Ozarks, literally and figuratively. I no longer have the stomach for the curvy roller coaster roads and neither do my Iowa children-thank goodness for Bonine (like Dramamine but it doesn’t knock you out.) Here’s an update on what we’ve been up to:

The day we left Iowa and found that we had drastically over-estimated the amount of stuff that would fit in our car I wondered if this was a bad sign. We ran so late after re-packing that our overnight visit in Kansas City fell through and we ended up deciding to just push through to my mom’s house in Arkansas. Note to self: We are too domesticated to be driving until 3 a.m., no more of that!

We spent the first week of our trip at Mom and Dad’s and even though it’s a few hours south of where we lived in Missouri I was so glad to show my kids the Ozarks that I grew up in; the trees and the hills and the running water everywhere-even more than usual. There had been so much rain it was flooding many areas and we had to plan our days carefully.

We watched the fireworks on the 4th of July over the lake, played mini-golf at the park, visited Turpentine Creek Wildlife Refuge in the heat and Terra Studios in a downpour. Mom took us out on their new pontoon boat and the kids loved being able to drive it.

I had hoped to meet up with more relatives, but many were busy. My cousin Mike and his wife Sherry spent the day with us and took us each up in their Cessna, and I was grateful that they made the time to reconnect-I don’t think I’ve seen them in 7 years.

I also took the cat to Mom’s vet for her health certificate that will allow her into Mexico. It has to be dated within 10 days of our departure, so I couldn’t get it done in Iowa. I’m telling you, that cat has been the most complicated thing about all this…

After a week at my parents house we were getting restless and feeling a little crowded, as adults who try living in someone else’s house do. It was time to move on to Missouri and catch up with old friends.

Erin and her family were vacationing on Table Rock Lake, and we stayed the first few nights with them rather than camping because it was pouring, and like I said places were flooded out. She has 3 kids as well, with the oldest two about the same age as June and Rory. Our families doubled there seemed to be kids everywhere jumping and running and having fun, any only two of them threw up that first night, one of hers and one of mine. Murphy’s law has a clause somewhere that if X number of children are in a vacation house then Y percentage of them will get sick, but oh well. They were better in the morning.

We spent a day at Silver Dollar City despite the rain, then went to my home town of Aurora for an impromptu reunion. A dozen people came to the park to see us, many of those I’ve loved best, and even thinking of them now makes me tear up with gratitude that I have known such great friends.

On the way home that night it was June’s turn to feel sick, then mine, and it was a very long nauseating drive. I loved the winding racetrack roads when I was a speeding teenager, but as an adult I find they get old really quick. Finally we made it back to Erin’s and slept it off.

As the weather cleared for the weekend we cleared out of Erin’s intending to finally make camp in Branson, but June still seemed a little off so we decided a night in a hotel might be needed. Having all three kids along meant that we needed room for 5 people, something I find much more difficult than the standard 4, and we ended up in a make-do place with a seriously ancient roll away bed for poor Rory-she didn’t even know there were springs in a mattress before but she felt the “poking things” as soon as she laid down. We piled blankets on for padding agreed that we would move the next night.

The girls were really excited to see the Titanic Museum, one of the largest collections of Titanic artifacts in the world, and we drove up to Springfield to ride through Fantastic Caverns. I wanted to do more, but time seems to be accelerated and we just can’t get anywhere fast-does this happen to all families or just mine I wonder? I feel like we just got here and half of every day disappears before we get anywhere.

With the rains replaced by heat advisories we gave up on camping and got a better hotel with a family room that we could spread out in. Today we’ll use up our remaining pass for Silver Dollar City and White Water, and that’s the last of our vacation. We’ll get the cat back from my mom’s, spend a few final hours with Erin and her family before driving to Kansas City Wednesday and getting on our flight for our move to Mexico Thursday morning. Chenoa will be picked up and head back to Des Moines on her own.

So that’s the short version of what we’ve been up to, I’ll go into more detail about some of our adventures when we settle into our new house in Cozumel. It’s almost time to go, and Jason and I keep looking at each other and saying, “only 3 more days…” The vacation is almost over, but the dream is about to become real.