Eating My Words About Being Safe…Almost 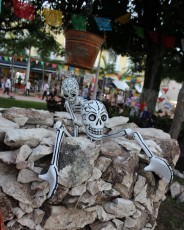 In the first week of December I’ve posted not once but twice on how safe I feel living in Mexico. This weekend I thought I was going to have to eat my words when my husband didn’t come home from a night out.

Jason is a big guy, and men are just raised differently than women in that men aren’t taught to think defensively in everyday situations. Women are told to stay in well lit areas, let someone know where you are, don’t walk alone. Men do whatever they want because guys don’t grow up being warned about getting roofied or mugged or raped.

Just before Jason disappeared we had a conversation about being aware that you’re a target-men aren’t raised to think like that, but in Mexico a drunk gringo is an easy mark. This weekend was not the first time Jason’s gone out alone to grab a beer after the kids are in bed but I have noticed that every time he steps outside alone in the dark he gets offered things that I never do…like prostitutes. It’s become kind of a joke to us.

The first time he was out really late was a heavy metal show a few weeks ago (do you even have to ask why I didn’t go to that?) Less than an hour after he left he brought home a guy dressed all in black who I found waiting in my living room while Jason ran upstairs to find a cable to fix a technical difficulty that was delaying the show. Needless to say he made friends. He met lots of local metal heads at that show and they were impressed that there was a gringo in the place, plus there aren’t many drummers on the island. He came home around 2am smiling from ear to ear.

So Saturday night when he said he was going to get a beer down the street I wasn’t worried. An hour later he posted pictures on Facebook from a Rockabilly show not far away. I went to bed around midnight thinking he’d be home before long.

I woke up at 3am when my phone went off. I had an odd text message: “On way back they drink a lot of water” It was weird, but I’d ask when he got home. I had almost gone back to sleep when the next message came “Sleeping in car f*#% sorry” That got my attention-why was he sleeping in the car?

Jason used to drink a lot (A LOT) when he was younger but he’s pretty much grown out of it. Now and then he forgets that he doesn’t have that mountain of alcohol tolerance anymore and he suffers for it, but it’s pretty rare. Was this one of those times? What was going on?

I texted him back and when I didn’t get an answer right away I called. He wasn’t slurring when he picked up but sounded strange. He kept repeating himself over and over and had a hard time comprehending my questions. He said he just felt weird, that things were tilting sideways and he had barely been able to walk to the car, he sure couldn’t drive. He felt so bad and it came on so suddenly-he said he thought someone might have drugged him.

He wasn’t too far away for me to walk, but that would mean leaving the sleeping kids alone at 3am. He said he just wanted to sleep an hour in the car until he felt better, then he would come home.  I doubted it, thinking once he was out he wouldn’t be waking up any time soon, but it wasn’t an emergency so what could I do? I told him to roll up the car windows so he’d be safe while he was sleeping, and it alarmed me when he argued that it was hot, “I am not rolling up the windows!” Finally he grumbled agreement and I heard the electric motor buzzing in the background.

I hung up but didn’t sleep much. What if someone had drugged him and was watching, waiting for him to pass out? Would he be safe in the car? Would the police stop to see why he was sleeping in there and possibly arrest him for public drunkenness? His I.D. is from Iowa and the car papers don’t have our address, they wouldn’t know where he lived, how would I find him? I was irritated and scared and my imagination ran wild for hours, but I still thought it was likely he’d just had too much to drink.

I set the alarm for 6am to see if he’d made it home. He hadn’t. I tried calling but there was no answer. His phone was probably dead by now. After the sun came up I decided I had to go get him. He’d been able to tell me the general area he was in, I’d walk down there and find the car.

I woke my 8 year old up and told her Dad hadn’t made it home and I needed to go get him. I should only be gone 10 or 15 minutes and didn’t want the kids to wake up and find themselves alone. To my surprise she wasn’t worried and happily settled in front of her cartoon. I gave her a cell phone that she could text me on and told her I’d be right back.

What happens if the car isn’t there? What if I can’t find him? What if I find him and someone did get to him after he fell asleep? Who do I call to report him missing? Please don’t let it come to that… It was a long walk.

I found the car right where he’d said it would be, and as I approached I could see his silhouette in the driver’s seat. I breathed a sigh of relief that he was there. The windows were only down a few inches, good. I could see him breathing slowly, asleep. If I woke him up suddenly he might be disoriented and take a swing at me, so I called his name through the open window. He woke right up and blinked at me. I have rarely been so happy to see him while wanting to smack him upside the head.

I made him go around to the passenger side so I could drive. The door was coated with vomit, but if he had been drugged maybe that helped get rid of it. More likely he had just had too many mojitos. Either way, he seemed confused but okay.

Jason was a little shaken by the whole thing. He asked how I found him because he didn’t remember talking to me on the phone. He didn’t remember a lot, but at the same time he still had most of his cash so he really hadn’t bought many drinks and didn’t think anyone else had either. He had met a few guys he knew from the metal show while he was out, but they were supposed to be his friends. It was starting to feel like the movie “The Hangover” as we tried to piece together what had happened, but at least no one was missing anymore.

He showered and napped and tried to trace his steps with some success, but it still didn’t make much sense. He felt weird and out of it but not hungover (and he knows what that feels like.)We talked about going back to the bar on Monday and asking if they had noticed anything strange.

That afternoon the kids and I went out to a local festival, but Jason wasn’t feeling good so he stayed home. After we left he started getting really cold, wishing he had packed his sweat pants and piling on blankets. It occurred to him that back in Iowa he only wore sweat pants when he was sick, so he took his temperature. He had a fever.

The kids had been sick all week and Jason had finally caught it too. The timing was really bad, but at least we had an explanation for what had happened to him. He wasn’t drugged, he wasn’t drunk, he had the flu.

I admit I felt like maybe I had asked for karmic trouble, that by publicly declaring we felt safe I had dared bad things to happen. It had ruffled feathers and the comments had gotten nasty enough I worried someone might be trying to teach us a lesson. In the end it was only our own fear that got us…and the flu virus.

Note to Grandma: Jason will now be going out only when he has a buddy to go out with and he is more impressed with both being safe in public and washing his hands-so don’t worry.

Note to everyone else: Yes, my husband approved this post.